TOKYO -- Excessive debt held by Chinese companies and households is highlighting a grave reality behind the country's economy.

In a sign that this debt is being regarded as a risk to the global economy, it became a topic of discussion at a meeting of G-20 finance ministers and central bank governors held in February. China even appears to be taking steps similar to Japan's moves in its own post-bubble era.

Total credit to the Chinese private non-financial sector stood at $21.5 trillion at the end of September 2015, accounting for 205% of the country's gross domestic product, according to the Bank for International Settlements. 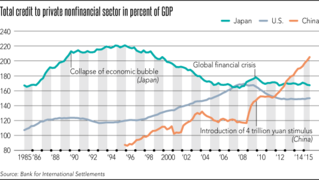 In Japan, the figure accounted for more than 200% of the nation's GDP at the end of September 1989, when the country was in the late stage of its economic bubble. After that bubble burst, the number shot up to 221% by the end of December 1995. Japan had fallen victim to its own excessive debt, and banks wrestled with bad loans for the next 10 years.

In the U.S., the boom in subprime housing loans for low-income borrowers evolved into a global financial crisis in 2008. At the end of September that year, total credit to the U.S. private sector reached its peak, accounting for 169% of the country's GDP. It took U.S. banks about four years to overcome their bad loan problems.

And now in China, the outstanding amount of total credit to the private sector has surged 300% from the end of December 2008.

After the crisis triggered by the Lehman bankruptcy in 2008, Chinese companies began borrowing money and increasing investment, thanks to the Chinese government's introduction of economic measures worth 4 trillion yuan (around $586 billion at the time). That stimulus has helped the country to account for half of the world's crude steel production. Now, however, China is facing the difficult task of making production adjustments, which is putting deflationary pressure on overseas economies. 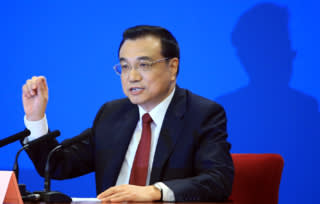 Premier Li Keqiang speaks at a press conference held after the conclusion of the National People's Congress on March 16. (Photo by Akira Kodaka)

At the opening session of the 12th National People's Congress, which ended on March 16, Chinese Premier Li Keqiang announced that the country will accelerate the development of a new economy. He also stated that China will address overcapacity in steel, coal and other industries.

Despite the positive stance, though, total credit to Chinese non-financial companies stood at $17.4 trillion at the end of September 2015, accounting for 80% of the total.

According to U.S. ratings agency Standard & Poor's, analysts will be paying close attention to possible defaults of businesses with a high debt-to-asset ratio. Companies in the metal, resources, properties and building materials sectors are particularly susceptible.

Likewise, total credit to Chinese households expanded to roughly $4 trillion in 2015 due to increasing mortgage loans. The figure was up sharply from $800 billion logged around 2008.

If Chinese companies and households start focusing on repaying their debts, spending and investment will decline, further slowing the country's economy.

The specter of deflation could hang in the air if Chinese companies have trouble cleaning up excess bad debt, which their Japanese counterparts could not fend off after the collapse of Japan's economic bubble.

"China's financial system could become unstable because of deflation, which could affect [economies in] Japan, the U.S. and Europe," said Hiroshi Miyazaki, senior economist at Mitsubishi UFJ Morgan Stanley Securities.

Assuming that investors will factor in such scenarios, the malaise seen in the global market at the start of the year could surface again.

The Bank for International Settlements also said that foreign banks' outstanding credit in China stood at $1.1 trillion at the end of September 2015. In light of this, a rise in capital outflow from China and an increase in lenders' efforts in getting their money back could accelerate declines in the yuan.

Such a currency fluctuation may cause Chinese tourists to tighten their purse strings. Toshihiro Nagahama, chief economist at the Dai-ichi Life Research Institute, predicts that a further decline in the yuan will have a negative impact on their spending during visits to Japan. SMBC Nikko Securities estimates that a 10% fall in the Chinese currency will reduce foreign tourists' spending in Japan by 149.1 billion yen ($1.3 billion) a year.