HONG KONG China's financial vulnerabilities are fueling the belief that China might have a "Minsky moment," in which debt levels hit the breaking point and asset values collapse. Among the dangers, local lenders being squeezed by tighter interbank credit, relentless growth of shadow assets and cross-holdings between banks and nonbank financial institutions.

On May 24, U.S. ratings agency Moody's cut China's sovereign credit score one notch to "A1" on worries that the inexorable rise in leverage across the economy will result in higher contingent liabilities for the government. Four years ago peer Fitch Ratings lowered its rating to an equivalent level of "A+" on similar concerns. 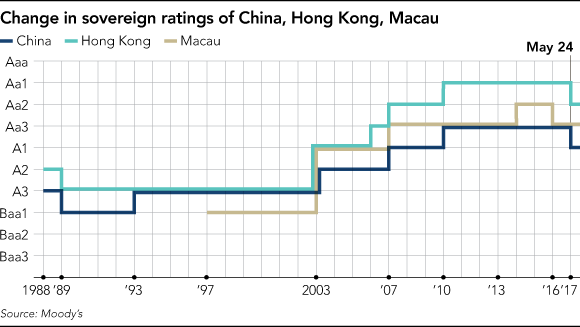 NO SURPRISE Moody's latest downgrade -- which puts China on a par with Japan and Israel, and one rank above emerging economies like Poland, Slovakia and Botswana -- did not come as a surprise to a lot of market watchers, even though the last time it happened was close to three decades ago. That was in November 1989, when China was wrestling with soaring inflation and economic sanctions imposed by the U.S. and its allies following the Tiananmen Square crackdown.

"The downgrade is pretty much expected, given the negative outlook last March. It's just that the timing is earlier than people expected," said Arthur Lau, head of fixed income for Asia excluding Japan at PineBridge Investments, citing the lack of new developments in China's macroeconomic data. "Plus, the argument or reasons for the downgrade were not new and already known by the market," he said.

Although Lau believes Chinese bond issues continue to offer more attractive yield spreads -- or returns -- versus comparable offerings with equivalent single-A ratings, he is cautious not to invest in small or midsize commercial banks that have increasingly relied for their income on wealth management and shadow banking products with wholesale funding. Within the financial sector, China's policy banks and top-tier commercial lenders are preferred, Lau explained, due to the interest-rate and foreign-exchange carry trades.

In parallel with the sovereign downgrade, the country's three policy lenders -- Agricultural Development Bank of China, China Development Bank and the Export-Import Bank of China -- saw their long-term issuer ratings fall to "A1." Commercial lender Agricultural Bank of China (ABC), the country's third largest by assets, had its long-term deposit rating cut to "A2" from "A1." Bank of Communications, the fifth-largest commercial bank by assets, is on review for a downgrade.

REVERBERATIONS IN HONG KONG The hit to Chinese debt also crimped Hong Kong's creditworthiness, causing both its local- and foreign-currency issuer ratings to fall from "Aa1" to "Aa2." This, in turn, dragged down the rating of the city's well-run railway company, MTR.

"Credit trends in China will continue to have a significant impact on Hong Kong's credit profile, due to close and tightening economic, financial and political linkages with the mainland," said Moody's, noting that China accounts for more than 50% of the territory's goods exports, 40% of services exports and 75% of tourist arrivals.

More worrying are the financial ties between the former British colony and China, which Moody's said are "broad in nature" and "large in the size of the assets involved." It noted that mainland-related lending among local banks surged 3.5% in the six months to the end of 2016 to 3.6 trillion Hong Kong dollars ($461 billion). Nonbank exposures rose faster, by 11.4%, to HK$1.2 trillion in the same period. Another special administrative region, Macau, maintained its "Aa3" rating, though Moody's said it was also subject to downgrade risks, due to developments on the mainland.

DOWNWARD SPIRAL Moody's downgrade, though unsurprising in its logic, comes at a time when economic data are pointing toward a leveling out of a reflationary trend, which several analysts suggest will hamstring Beijing's plan to deleverage the financial system.

There are growing signs that reduced access to both traditional bank loans and the primary bond market has spurred a number of bodies to turn to shadow banks for survival. These include local governments; industries suffering from overcapacity, such as mining; and property developers with high financing needs. New flows through trust loans and other channels more than tripled on the year to 2.05 trillion yuan ($298 billion) in the first quarter.

The rise in shadow assets has pushed Yu'e Bao, owned by Alibaba Group Holding's affiliate Ant Financial, to become the largest money market fund in the world. Its investment in negotiable certificates of deposit -- an important facilitator of interbank liquidity -- helped boost its assets under management to $165 billion at the end of the first quarter.

While the corporate sector tries to dress up its balance sheet by selling shares rather than cutting liabilities, the red-hot property market has also encouraged households to take on more debt. HSBC said in a report on May 25 that China's household debt, at 44% of gross domestic product, is fast catching up to the more leveraged economies in the region. "At the current pace, the household debt-to-GDP ratio will exceed Japan's current level in a few years," said the bank.

"The planned reform program is likely to slow, but not prevent, the rise in leverage," said Moody's, noting that Beijing's priority for growth will result in sustained policy stimulus, and push the national debt toward 40% of GDP next year, and close to 45% by the end of the decade.

"The greater concern, in our view, is not what the debt buildup is doing to government creditworthiness. Instead, it is that loose credit policies designed to prevent struggling firms from failing are eroding the economy's long-run growth potential by preventing resources from being allocated to areas where they could be used more efficiently," said Mark Williams, chief Asia economist at London-based Capital Economics, in a note on May 24.

Ballooning bad debts are a natural corollary of such market-defying practices. Fitch Ratings put China's nonperforming loan ratio at 15-21% in 2016. "The NPL range reflects our estimate that more than half of the increase in the credit stock during 2008-2015 could be inefficient in terms of its contribution to GDP, and at a high risk of becoming impaired," said the credit ratings agency. It estimates that one unit of additional credit currently generates only around one quarter as much in incremental GDP.

Opening up its bond market, as Beijing wishes to do, with measures such as the recently announced Bond Connect program, may help allocate resources more efficiently and transparently. But before trying to tickle the fancy of foreign investors, China may first need to convince the three international investor watchdogs that its spiraling debt can be brought under control.