Beijing's debt binge is a clear danger to the global economy

Xi has come to approve a crackdown on private companies getting too big to fail or control.   © Reuters
CopyCopied

The search for cautionary tales to explain where the world`s second-biggest economy is headed lead most observers to Tokyo. Certainly, Beijing's dueling bubbles in credit, debt, shadow banking and complacency are too Japan-like for comfort. But the sudden and panicky crackdown on a handful of companies -- Anbang Insurance Group, Dalian Wanda Group, Fosun Group, HNA Group -- suggest Beijing also has a chaebol problem on its hands. The reference here is to the giant, family-run conglomerates that toppled South Korea`s economy in 1997. Signs are that Beijing faces a similar tail-wagging-the-dog problem.

Consider what happened this month. For years, investors angled for a gateway to China's $10 trillion bond market. It was the next logical step after foreigners gained access to Shanghai and Shenzhen stocks. But when they got their mainland bonding experience, most stayed away.

That is not just a blow to President Xi Jinping's campaign to boost global use of the yuan. It is a harbinger of trouble for China's lopsided economy nine years after investors thought the Communist Party had deftly avoided the "Lehman shock."

The problem with Beijing's crushing debt load is borrowed time. China's 2008 response to the post-Lehman-chaos was to create overlapping bubbles in credit, local government borrowing and shadow banking. In 2012, Xi inherited this unholy trinity of stimulus. And despite assurances to the contrary, Xi stuck with it.

The first hint that the bill is coming due came in May, when Moody's Investors Service downgraded Beijing's sovereign rating for the first time since 1989. Claims by Xi's men that the step was "absolutely groundless" look even more delusional now that foreign investors are avoiding Chinese debt. The newest concern, though, is political risk imperiling Beijing's credit rating and economic stability as a uniquely chaotic 2017 unfolds.

For a government that prides itself on extreme competence, Xi's is certainly generating lots of volatility going after prominent tycoons -- especially those with big footprints abroad. Chinese media call them "gray rhinos," obvious dangers that you ignore until it is too late. Whereas Silicon Valley obsesses over "unicorn" success stories and Wall Street over "black swans" no one saw coming, Beijing is preoccupied with giant, highly indebted and politically connected companies it deems threats to financial safety at home.

Few foreigners had even heard of HNA before Xi's headline-making inquisition. What started as a little-known airline operator has grown into a global colossus, making more than $40 billion of acquisitions since January 2016. Those debt-financed deals pushed HNA's tentacles into financial services (Deutsche Bank), tourism (Hilton Hotels), logistics and even President Trump's orbit.

Trump's short-lived communications chief, Anthony Scaramucci, is trying to sell his SkyBridge Capital hedge fund to a company whose ownership structure is up for debate. Recently, HNA said it is controlled by two charities, one in New York and one on China's Hainan Island. That prompted Eric Schneiderman, the New York Attorney General, to send a letter asking for more information about one of the charities. The plot thickens when you consider that Anbang Chairman Wu Xiaohui, who bought New York's Waldorf Astoria last year for $2 billion, was detained by Chinese police in June. Fosun's Guo Guangchang, often called the "Warren Buffett of China," also is under scrutiny by Beijing.

Xi's clampdown speaks to China's chaebol quandary. As regulators focus their attention on a handful of companies, let us not forget how China got here. Its debt, competing bubbles and opacity have created a mergers and acquisitions monster Xi is not sure he can tame. Is the recent boom in junk bond issuance a sign of bigger M&A deals to come? Investors should watch more carefully a financial system that is top-heavier than Xi admits. The problem is bigger, though. China is the world`s second biggest economy, whereas Korea's was barely in the top 12 in 1997. Also, the troubles facing HNA and other highly-leveraged, overstretched companies extend to the state sector that towers over China.

Beijing is spreading its own tentacles via the Asian Infrastructure Investment Bank and "One Belt, One Road" project. Over the last two years, the private sector led the "China international" charge with its head-turning global investment spree. In 2016 alone, China's overseas acquisitions reached a record $225 billion. Now Xi's team wants the private sector to cool it down. It worries tycoons are overpaying for "blind and irrational investment" deals. Also, outflows were weakening the yuan, increasing default risks and risking Trump's ire.

Xi has since approved a crackdown on private companies getting too big to fail -- or control. The thing about state-owned assets is they bring their money profits back home. Private conglomerates, not so much. That is why as China recreates the Silk Road, private tycoons are being redirected back home. That may be wise, if the tycoons are planting the seeds of a corporate crisis. But it also raises questions about Xi's real desire to shrink the state sector.

China being the black box it is, no one knows if it is too late to get the mainland chaebol under control. Nor can we say with any certainty if curbing the Anbangs, Wandas, Fosuns and HNAs of China is about giving the state sector an even freer hand to export overcapacity to Southeast Asia, the U.S., Latin America and Africa.

What is clear is that China Inc. is dangerously top-heavy with debt, opacity and uncertainty at the same moment Xi guns for another five-year term and Trump threatens to do his worst. Chinese political risk is not just a turn off for bond buyers. It is a clear and present danger for the world economy. 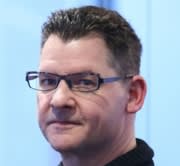 William Pesek is a Tokyo-based journalist and author of "Japanization: what the world can learn from Japan's lost decades." He is a former columnist for Bloomberg.