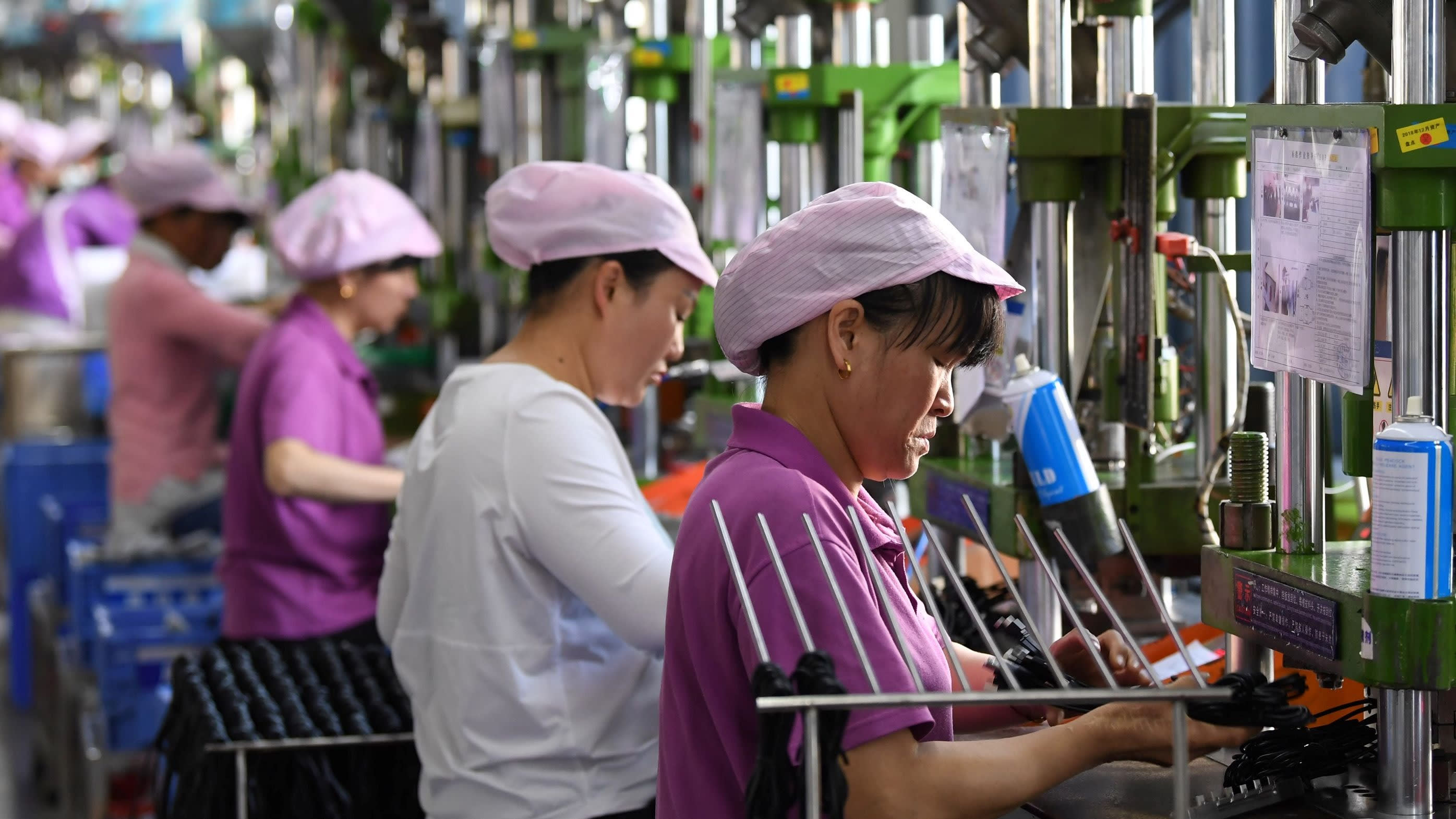 Women work on a cable production line at a factory in Jiangxi Province. Analysts say the outlook for factory gate prices is unlikely to change even as U.S.-China trade tensions have eased slightly.   © Reuters
October 15, 2019 13:12 JST | China
CopyCopied

The producer price index (PPI), considered a key barometer of corporate profitability, dropped 1.2% year-on-year in September, National Bureau of Statistics (NBS) data showed on Tuesday. That marked the steepest decline since July 2016 but matched forecasts in a Reuters survey of analysts.

"We continue to anticipate further loosening in the next few quarters as demand-side pressures remain muted and factory-gate deflation deepens," Martin Lynge Rasmussen, China Economist at Capital Economics, wrote in a note.

The grim outlook is unlikely to change even as tensions in the year-long trade war between Beijing and Washington have eased somewhat. U.S. President Donald Trump said on Friday the two sides had reached agreement on the first phase of a deal and suspended a tariff hike, but officials said much work still needed to be done.

Weak prices were mainly seen in oil and raw material sectors. PPI deflation could deepen due to weakening domestic demand, falling energy and raw material prices and the value-added tax cut that became effective in April this year, analysts at Nomura said.

Some analysts expect China's GDP growth rate to slip below 6% in the third quarter. The government has set a growth target of 6.0%-6.5% this year.

Trade data released on Monday showed contractions in both exports and imports as U.S. tariffs implemented on Sept. 1 came into effect, underscoring the continued impact of the bilateral dispute.

China has taken a cautious approach in dealing with the slowing economy. Stimulus to date has largely avoided dramatic increases in government spending and the central bank has also mainly used the reserve requirement ratio for banks instead of sweeping interest rate cuts.

Chinese central bank governor Yi Gang said late in September there was no urgent need to implement large interest rate cuts following Beijing's reiteration that it would not use "flood-like" stimulus measures.

Analysts say they expect greater stimulus measures at the end of the month, however, when China's Politburo, the top decision making political body, is expected to meet.

"Since there is very limited policy autonomy at ministries, local governments, and SOEs (state-owned enterprises), the policy decision pass-through has to come from the above," said analysts last week in a note from Bank of America Merrill Lynch.

The People's Bank of China cut a reserve ratio for banks in September, freeing up $126 bln for loans.

Data released by NBS Tuesday showed China's consumer price index (CPI) rose 3% from a year earlier, higher than 2.9% tipped by analysts and marking the fastest increase since October 2013, when it rose 3.2%.

A 69.3% surge in pork prices in September year-on-year pushed the food price index up 11.2%, accelerating from 10% in the previous month. In August, pork prices rose 46.7% from a year earlier.

China has been fighting the devastating African swine fever and has implemented a series of policies to try to replenish its herds, including flying in 900 breeding pigs from Denmark.

Many analysts still expect pork prices to trend higher in the coming months as the disease spreads and hog stocks get slashed, despite a flurry of government measures to ramp up supply to the market.

But few expect that would have a material impact on China's monetary policy-making for now.

"We do not think the pork-price-driven CPI inflation will have a significant impact on the PBoC's monetary policy stance, as the pork price inflation was caused by a supply shock rather than a monetary phenomenon," said analysts at Nomura.