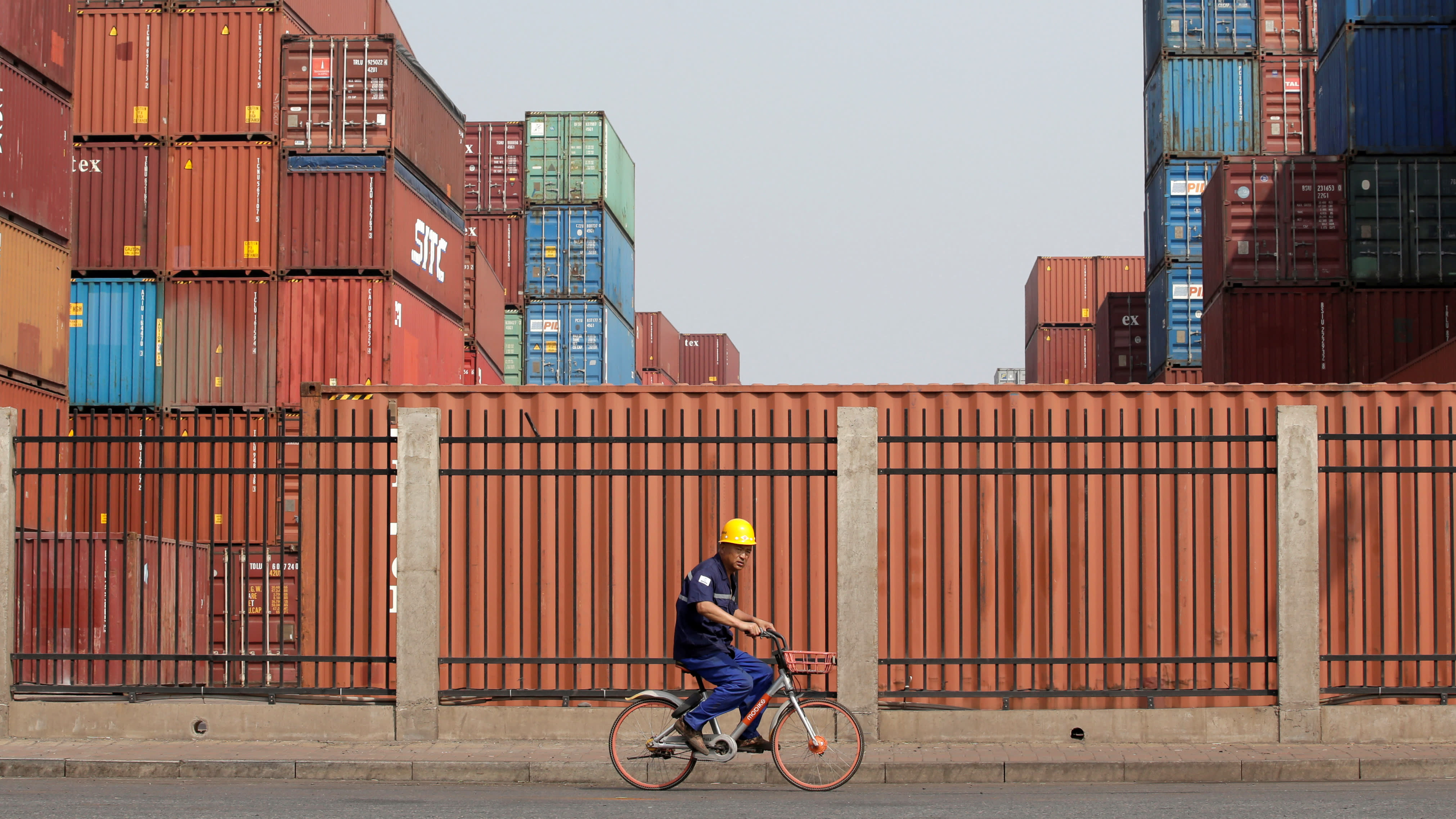 Despite China and the U.S. agreeing to resume trade talks, fewer economists than in the previous survey expect the the world's largest economies to de-escalate their trade fight in the coming 12 months.   © Reuters

HONG KONG -- Chinese gross domestic product grew 6.2% in the April-June quarter, according to an averaged forecast of economists who specialize in China as surveyed by Nikkei and Nikkei QUICK News.

The expected pace would represent a slowdown from the 6.4% in the January-March period, which remained unchanged from the previous quarter.

China and the U.S. in late June agreed to resume trade talks, but fewer economists expect the dispute between the world's two largest economies to de-escalate in the coming 12 months.

The U.S. raised its punitive tariffs on furniture, home appliances and other products worth $200 billion to 25% in May, a 15 percentage point increase. It also imposed an effective ban on exports to Huawei Technologies.

The average full-year growth projection is 6.2%, down 0.1 point from the March survey. The economists expect a moderate slowdown to continue, with their averaged forecast at 6.1% for 2020 and 6% for 2021. "The trade dispute could spread to the technology sector, and the fallout may be felt in the high-tech industry and employment in the second half," said Xie Yaxuan, chief economist at China Merchants Securities.

Some economics are less pessimistic. "Fiscal and monetary policies that began in late 2018 have started to bear fruit," said Fan Xiaochen, director at MUFG Bank. "China will maintain stable growth of more than 6%."

David Rees, emerging market strategist at J. Safra Sarasin, is also counting on policy measures. "We continue to believe that the lagged effects of tighter credit conditions weighed on China's economy into Q2," he said, "but that an increasingly aggressive policy response will engineer a turnaround in the second of this year."

The Chinese government has set its 2019 growth target at 6% to 6.5%. Many economists believe it will implement additional stimulus measures if the economy continues to lose pace. Cheng Shi, chief economist at ICBIC, thinks regional governments will issue more bonds to finance infrastructure projects and introduce incentives to spur personal spending on automobiles and other items.

Iris Pang, greater China economist at ING Bank, expects stimulus spending to double from the previous estimate of 2 trillion yuan to 4 trillion yuan ($295 billion to $590 billion), mainly in the environment and transportation sectors.

As for risks that could drag down the economy, 12 of 15 economists who gave valid answers cite the outcome of the U.S.-China trade talks.

Kenny Wen, a wealth management strategist at Everbright Sun Hung Kai, calls the trade talks the biggest variable for the second half of 2019. He said there is a 55% likelihood that Beijing and Washington will reach some kind of consensus by the end of the year. If negotiations break down, he said, "financial markets would become volatile and the economic slowdown will pick up pace."

Mihoko Hosokawa, a research executive at Mizuho Bank (China), has a similar view. "Prolonged negotiations will result in continued uncertainties over the economic outlook and delay the recovery of consumption and investment mind," she said.

"If there is no deal," said Sean Taylor, chief investment officer for Asia Pacific at DWS, "we could expect: 1) Chinese exports to shrink further; 2) export oriented companies would lay off more employees. The growth rate will fall to around 5% and China will fall into a serious economic crisis."

Despite presidents Xi Jinping and Donald Trump late last month agreeing to resume trade talks, many expect a consensus to elude the superpowers. Asked about their outlook on the matter over the next 12 months, 47% expect "no change," while 33% expect "improvement." In the previous survey, nearly 70% expected improvement.

"In the event of a cease-fire [and $300 billion in higher tariffs are not imposed], we estimate China's 2019 GDP growth could improve to 6.2% to 6.3%," said Eric Zhu, chief economist of Barclays Asia Pacific. "Trade uncertainties [are] to remain elevated despite the G-20 truce; we see reduced probability of near-term escalation [worsening], but not necessarily increased chances of a deal being made."

Said Arjen van Dijkhuizen, senior economist at ABN AMRO Bank: "With U.S. presidential elections scheduled in 2020, pressure will increase on President Trump to make a deal with China. Even if a short-term deal is struck, strategic competition between the U.S. and China will continue, particularly in the area of technology."

"If revenue declines caused by tax breaks continue," Hosokawa said, "it could damage the health of state finances in the mid- to long-term."