Forecasts of real gross domestic product growth in 2017 averaged 6.4% in the poll by Nikkei Inc. and NQN. 2016 data due out in January is expected to show 6.7% growth, meeting the government's goal of at least 6.5%. But much of this owes to fiscal policy, such as infrastructure spending and tax breaks, as well as a housing boom. 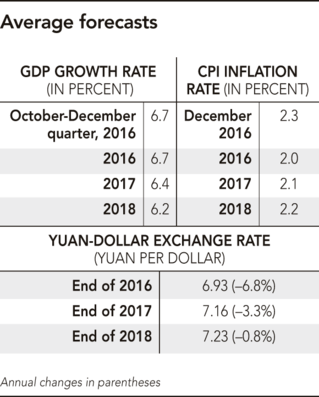 "Reduction of excess capacity has been slow because of the rise in the producer price index," which includes such items as steel and coal, observed Ken Chen, Chinese-economy analyst at KGI Asia. "The economy is still a long way from bottoming out."

The Chinese government is widely expected to prioritize economic stability over structural reform ahead of the Communist Party's national congress next fall, where leadership decisions will be made. Arjen van Dijkhuizen, senior economist at ABN AMRO Bank, predicts continued fiscal measures to shore up the economy. Beijing "does not want to put the hard-won macroeconomic stabilization at risk," he argued.

Controlling financial risks will be high on the agenda at 2017's Central Economic Work Conference, where the course of economic policy is set. A majority of respondents expect the People's Bank of China to hold off on monetary easing for now in order to curb the influx of money into the real estate market.

"A growing awareness of the potential problems from China's massive credit bubble means that policy support for the economy is likely to be focused on fiscal measures rather than further monetary easing," said Richard Jerram, chief economist at Bank of Singapore.

A downturn in the property market remained the most-cited downside risk to the Chinese economy. Asked to rate how "bubbly" the market is on a scale of 1 to 10, respondents pegged it at 7 on average -- unchanged from the previous survey three months earlier.

Prices are turning downward in some cities as alarm at this frothiness drives local governments to impose restrictions on homebuying. Such measures are expected to "drag down housing investment and result in negative spillover to many other sectors" starting in the first half, said Yao Wei, China economist at Societe Generale Corporate & Investment Banking.

Many respondents see the yuan continuing to soften as U.S. interest rates rise. The economists' average forecast puts the Chinese currency at 7.16 to the dollar at the end of 2017, more than 3% weaker than the estimate for the end of 2016.

Concerns were also expressed over capital flight. Yuan-selling for dollars will surge once the $50,000 annual quota for Chinese individuals resets for the new year, said Yang Zhi of the Hong Kong branch of Bank of Tokyo-Mitsubishi UFJ.

Economists are also keeping a keen eye on Trump, who is taking a hard line on China. His upcoming presidency ranked third on the list of downside risks, behind the property market and capital outflows.

"If the U.S. takes protectionist measures against China, American exports to China will be affected as well," said Shen Jianguang, chief China economist at Mizuho Securities Asia, citing aircraft as an example.

Trump has also vowed to label China a "currency manipulator." Many respondents -- including Ricky Choi, senior economist at the economic research division of Bank of China (Hong Kong) -- contend that China does not fulfill U.S. Treasury Department criteria. Yet Trump's policies might still "lead to some appreciation pressure" on the yuan in the future, said Xia Le, chief Asia economist at BBVA Research.

Some economists expressed skepticism that the president-elect will follow through. "We do not think Trump will implement in full the punitive trade policies he promised during the campaign, because doing so will backfire on the U.S. economy," said Aidan Yao, senior emerging-Asia economist at AXA Investment Managers Asia.

Others remained on the fence, such as Julius Baer's Susan Joho, who called Trump's proposals a risk but cited "high uncertainty about implementation."

Economists responding to the survey, in alphabetical order by company: