Disagreements over costs and land procurement are adding years to schedules NAKHON RATCHASIMA, Thailand Exports of high-speed railway systems by China to Southeast Asian nations are lagging behind schedule due to problems over cost sharing and delays in land procurement.

A China-led project in Thailand is finally about to get underway, two years after a groundbreaking ceremony for a part of the route. But the outlook for connecting the line with China's planned pan-Asian railway network is still dim.

The situation is a matter of concern to China as high-speed railway exports represent a core of the Belt and Road Initiative to reinforce its relations with neighboring countries through infrastructure projects.

"The railway will support Thailand to become a transport and logistics hub of the region," Thai Prime Minister Prayuth Chan-ocha said at the ceremony. He added that the railroad cannot be completed without the help of Thailand's "friend," China.

From China, Wang Xiaotao, vice chairman of China's National Development and Reform Commission, attended the ceremony. In his remarks he read out a message from Premier Li Keqiang saying that the railway project will be a "win-win" for both countries and that he hoped the construction of the railroad connection to Laos would start "as soon as possible."

The first high-speed train line in Thailand is planned to begin operations in 2021 at a maximum speed of 250kph, cutting travel time to an hour and a half from the current three-plus hours on the State Railway of Thailand.

Transport Minister Arkhom Termpittayapaisith said plans to build the missing link between the Laos border and Nakhon Ratchasima will be submitted to the Cabinet for approval early in 2018. "We aim to start operation of the full railway by 2023," he said, although it is not clear if this can be realized.

The December groundbreaking ceremony was the second for the project. Although the first was held in 2015, work has not started because Thailand and China have failed to iron out differences such as how to share the costs of construction.

CHANGES UPON CHANGES Tangled negotiations between the two countries have resulted in drastic changes in the project, leaving only its name intact.

While the Thai government initially envisioned the two countries sharing the construction costs, it now intends to only import technology from China and shoulder all of the expenses.

The original plan called for laying a train line over a distance of more than 600km between Bangkok and Nong Khai Province in northern Thailand, which forms the border with Laos. Another line that leads to Map Ta Phut, a large port on the eastern seaboard, was also in the plan. The total length of the tracks was to add up to 870km. But Thailand and China have newly agreed to cut this to less than one-third of the initial plan, shelving the construction of the segment between Nong Khai and Nakhon Ratchasima.

The two governments decided on the changes for two reasons. First, the Thai government considered unacceptable some of China's demands, such as the rights to develop areas along the rail line, in return for sharing the construction cost. In addition, Thailand rejected the high interest rates proposed by China for loans to finance its costs.

Beijing considers the demands reasonable because China seeks to cover the risks accompanying the use of its own funds. But the Thai government balked at what it considered China's self-righteous attitude, and actions such as submitting maps written in Chinese, contrary to Thailand's wishes. This aroused distrust among the Thais.

Thailand thus decided not to rely on China, and took its own initiative in selecting the construction areas and raising funds.

DIFFICULTIES AHEAD Although the project is about to get underway, there are still difficulties ahead. For example, the initial work will cover only 3.5km. The Thai military government wanted to show tangible results from the project soon, and asserted its authority to skip bidding procedures and budget deliberations.

For the rest of the line, the government will solicit bids by stages. With less than a year to go before a general election in November, as pledged by Prayuth, it is unclear how far the project will advance under the junta.

The start date of construction between Nong Khai and Nakhon Ratchasima remains pending. China has a plan to build a 5,000km pan-Asian railway network linking Kunming in the southern province of Yunnan with Laos, Thailand, Malaysia and Singapore. But at present the important link between Laos and Thailand is still missing.

Although China is expanding its influence in Southeast Asia, its railway construction work is advancing only in Laos. China outbid Japan for an Indonesian project to lay a high-speed railway between Jakarta and Bandung, but the procurement of land for the work has been stalled. Despite a groundbreaking ceremony being held in 2016, the project has made little headway.

With fundraising for the Indonesia project hardly in sight, there is even talk of cutting Indonesia's stake to 10% from 60%. It is effectively impossible to complete the project by May 2019 as planned. 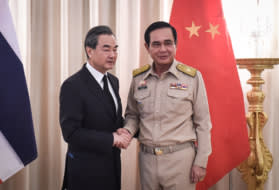 International bidding for a project to build a high-speed rail line to link Malaysia and Singapore started on Dec. 20. Hoping to win the order, China has already started developing areas along the planned railway. It is expected to compete with Japanese, South Korean and European consortiums.

The Malaysian and Singaporean governments are likely to take into account cost-based profitability and the interchangeability of parts and rolling stock among different makers when granting the order.

China's stumble is by no means someone else's problem for Japanese companies seeking to export railway infrastructure to Southeast Asia. The outlook for a plan to lay a 670km railway between Bangkok and Chiang Mai, using Japan's shinkansen bullet train technology, depends on whether Thailand will shoulder the construction cost, estimated at 420 billion baht.

While Japan has proposed a set of support measures including long-term, low-interest yen loans, criticism remains among Thai officials about the project being too expensive. The project will fall through if the two sides fail to iron out their differences.