DALIAN, China -- It used to be that Chinese industrial parks conjured images of black smoke, metal on metal and sweaty workers. Today, many of these zones are nice, affordable place to live. City dwellers, especially young couples, are purchasing condominiums in sururban industrial parks as an alternative to the astronomical expensive housing options downtown. 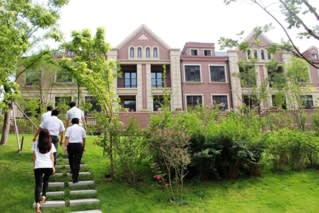 On the heels of these young couples, property developers are also rushing into industrial parks, building shopping malls, cinemas and hotels. The influx of new residents has breathed new life into industrial parks that were, ironically, originally designed to house factories away from residential areas. And in general, factory operators are not happy with their new young neighbors, who are complaining about the noise, the bad air, the dirty water and the vibrations.

A massive condominium development project is going up in the economic and technological development zone in Dalian, Liaoning Province, the biggest port city in northeastern China. The zone is a 40-minute drive from the city center and is home to some 800 Japanese-affiliated companies.

The Red Star Sea condominium development project in the zone involves the construction of several dozen high-rises that when done will be home to 10,000 units.

Prospective buyers are mostly young couples who work in the city. In the past, workers at the development zone's factories commuted by bus from the city. But now an increasing number of people are living within the zone and commuting to the city for work.

Dalian Wanda Group, a major Chinese commercial property developer, is building a commercial complex in the central part of the zone to accommodate these new neighbors.

Called Wanda Plaza, it will comprise a large shopping mall, a cinema complex, hotels, apartments and offices. It is scheduled to open in August 2015.

Wanda Plaza is being built on 98,700 sq. meters of land. The site was previously used by a local company to operate a printed circuit board production factory. To make way for the shopping mall, the factory was torn down only eight years after it went online.

But keep it down

The influx of city dwellers into the development zone has an issue for many of the factory operators already there. 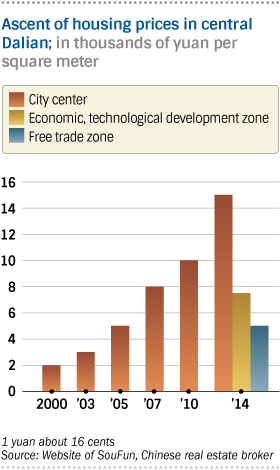 "Why do factory operators have to feel timid for the sake of residents who moved in after us?" the executive said.

A local government official familiar with the matter said: "When construction of the development zone started 30 years ago, the zone's area was only a fiftieth of its current size. People involved couldn't predict this rise in population due to rapid economic growth. It was a development project lacking foresight."

The absence of city planning and urban design has lead to a mess. Today, there is a factory, a shopping mall, a furniture shop and a McDonald's, all in one row. To avoid the same kind of mistake, a seperate industrial park has embarked on a new type of development, where factories and houses are designed to co-exist.

Dalian Free Trade Zone's "FTZ Eco town" is a 30-sq-km residential area located near an automobile logistics park, home to suppliers of Nissan's new factory in Dalian and to domestic car maker Chery Automobile. It is strategically built 5km from the nearest factories, to give the town space to expand. To compensate for the long commute to downtown Dalian, FTZ Eco town offers "a more comfortable life," according to the developer Dalian Yifang Group. The town will have 46 green spaces, as well as hospitals and elderly care facilities, which they plan to bring in from Japan.

But there are some risks involved in living in residential areas adjacent to industrial parks.

An official at a Japanese-affiliated real estate company in Dalian said: "Industrial parks are designed to provide high voltage electricity and massive amounts of water to manufacturers. It just isn't designed for residential apartments"