BEIJING -- Real estate prices are surging throughout China despite controls put in place to ward off a property bubble. Smaller cities taking advantage of loopholes are leading the upswing.

Xi'an, the capital of Shaanxi province, last year instituted rules that let college students file the city as their place of household registry under China's tightly controlled system. Students can use that status to buy property in the city with their parents, as one student admitted.

An outsider would normally have to put in at least two years paying into the tax coffers and social insurance entitlements before being allowed to buy a house in Xi'an. But a household registration circumvents that red tape.

Xi'an rolled out the scheme to draw skilled workers. In the end, the city's real estate prices rose at a rate that outpaced the national average. Prices grew 1.2% in July from the previous month.

Housing prices rose from June to July in 65 out of 70 principal cities, official data released Wednesday show, a number last seen in April 2016. Just like Xi'an, provincial capitals like Changsha, Wuhan and Chengdu have been granting college students residential status, which has pushed up property values. Beijing and Shanghai, where restrictions remain tight, experienced slight decreases in prices.

Real estate prices are up in such third- and fourth-tier cities as Jilin, Yichang and Yangzhou as well. And condominiums have gotten more expensive in such places, regardless of population trends.

In these instances, local governments are redeveloping aged residential areas, in line with the policy drawn up by China's top leadership. The drive is meant to relieve the deteriorated living conditions of low-income residents who often move in from rural areas. About 40 million units of housing have been redeveloped between 2008 and 2017.

Previously, those forcibly evicted were compensated with new housing, but the authorities began in 2015 to simply give evictees cash as a poverty reduction measure. The People's Bank of China, the central bank, lends funds to state-run China Development Bank, which then lends to local governments to bankroll the monetary compensation. Though indirectly, the central bank is basically adopting the unusual role of subsidizing real estate purchases.

Outstanding loans at the PBOC stood at 3.18 trillion yuan ($458 billion) at the end of June. Those loans associated with compensation for evictions jumped from 8% in 2013 to 49% in 2016. People receiving the cash often use it to buy condos either within their hometowns or nearby. 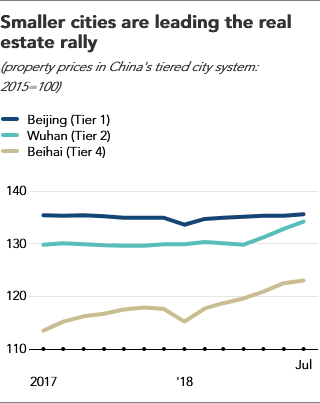 The stock of condos in rural areas has apparently run thin. "They lifted the growth of property purchases by approximately half in 2016 and 2017," said Wang Tao, head of China economic research at UBS.

The central leadership, wary of a real estate bubble, has begun scaling back cash subsidies. The PBOC lent 30 billion yuan to China Development Bank in July, falling to levels not seen in 17 months.

"There is a risk of real estate prices falling steeply in tier-3 and 4 cities, which would strike a blow to local real estate development companies and banks, and sink consumer spending," said an analyst at an international brokerage.

The Communist Party's Politburo decided at the end of July to "resolutely" rein in escalating property values, suggesting more motivation to tackle the issue than local governments are showing. This is because the national government's crackdown on shadow banking has caused regional authorities to rely on land sales for revenue. During the first six months of the year, receipts from land sales soared 43% from a year earlier to roughly 2.7 trillion yuan. The figure for all of 2018 is on track to beat the record set last year.

Changsha's property prices climbed 2.7% in July from the previous month. But citizens believe that cash-starved local government authorities have little intention of restraining real estate values. "The city government depends on real estate for revenue," said a Changsha taxi driver. "If a property doesn't sell at first, they will hand out subsidies and so that it can be purchased."