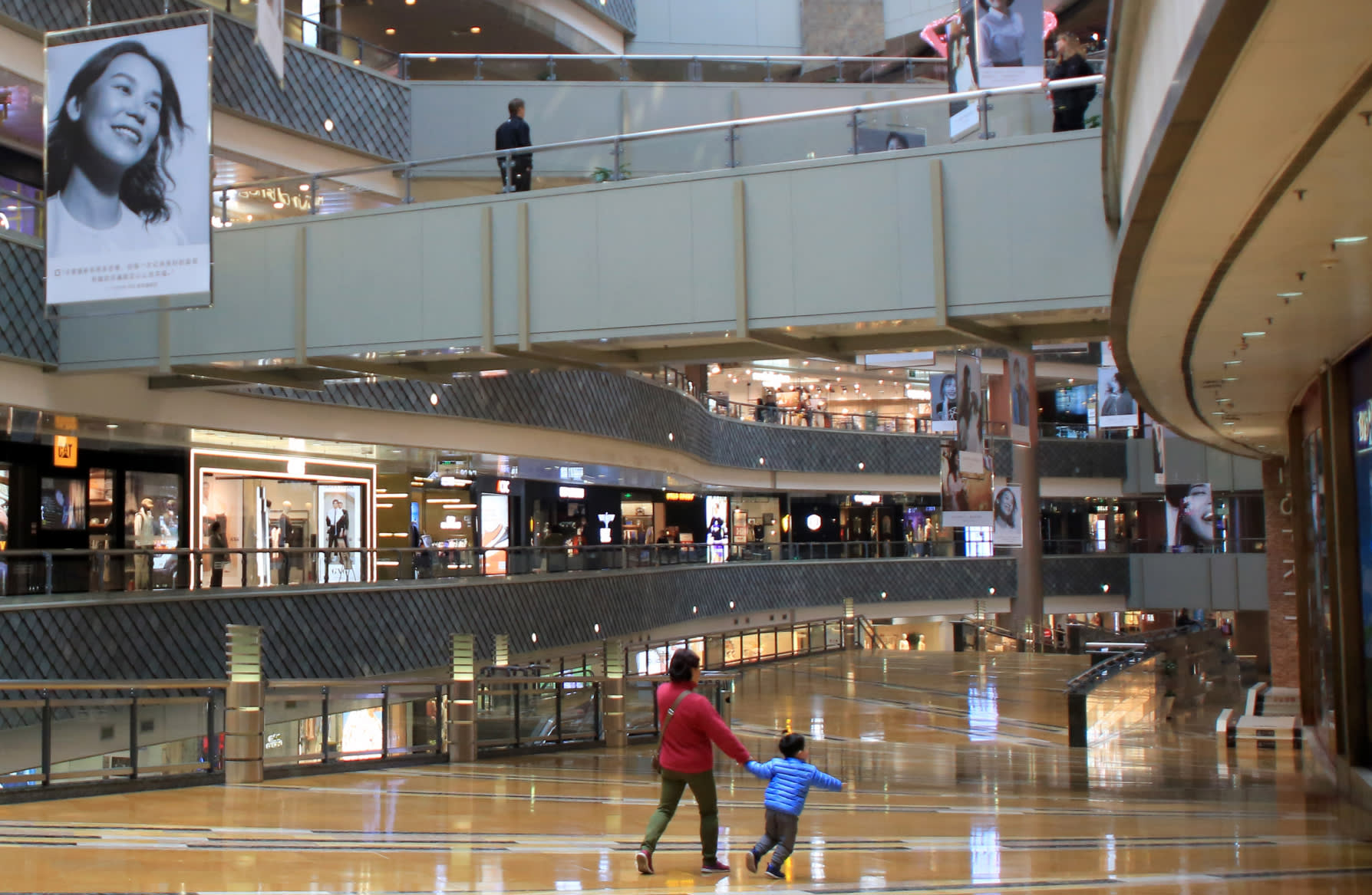 Empty shopping malls such as this one in Shanghai are not an uncommon sight in China. (Photo by Kosaku Mimura)
ISSAKU HARADA, Nikkei staff writerMay 5, 2018 12:02 JST | China
CopyCopied

BEIJING -- China's obsession with getting on the property ladder is taking its toll on consumption, as inflated real estate prices burden homeowners with hefty mortgage repayments, leaving them little disposable income.

In a country where home ownership carries immense cultural significance, especially in the capital, the need to purchase a property separates those who spend freely from those who keep their purse strings tight.

If a Beijing-born man's parents own a condominium, they often pass it on to their son when he marries. But those who have moved to the capital from elsewhere must buy one themselves. When two people from outside Beijing marry, they often scrape together money from relatives to buy property, a real estate broker here says.

This effort owes largely to a deep-rooted view that a man without his own home is unfit to marry. With men of marrying age outnumbering women by a wide margin, women can afford to maintain those high standards for partners. Renting rather than owning housing also makes it tougher to send children to good schools.

Condos cost just as much in Beijing as in Tokyo, if not more. A Chinese state employee who bought a condo two years ago for the equivalent of 60 million yen ($565,000 at current rates) laments that the mortgage payments allow for little personal spending. A rough estimate of money consumed by property payments last year can be deduced from official data, with down payments, principal and interest apparently totaling 8.6 trillion yuan ($1.37 trillion at current rates).

About 1.7 billion sq. meters of real estate were sold in 2017 for a total of 13.4 trillion yuan. Down payments average 33%, according to the People's Bank of China, which translates to over 4.4 trillion yuan. Outstanding household debt stood at 40.5 trillion yuan at the end of 2017. With loans averaging 20 years, the principal paid last year likely totaled around 2 trillion yuan. The interest rate on loans averaged 5.3% in December, indicating that households paid approximately 2.1 trillion yuan in interest.

Loans to buy condos generally are sought by city dwellers. Disposable income in urban areas averaged about 36,000 yuan last year, compared with 24,000 yuan for personal consumption. This difference of 12,000 yuan, combined with the roughly 810 million people living in Chinese cities, should produce up to 9.7 trillion yuan in cash left over last year. But property payments apparently consumed 8.6 trillion yuan -- 88% of the total.

Such a ratio tops the record set in 2013. The figure fell to the 70% range in 2014 and 2015 but surged the following two years. The central government under President Xi Jinping loosened mortgage lending standards in 2015 to avert a feared economic slowdown, letting property prices skyrocket in major cities. The government eagerly offered subsidies and loans to rural migrant workers and others to buy unused housing stock in outlying areas.

Devoting this large share of income toward home loans leaves less money for other spending. Sales of consumer goods declined sharply when the real estate spending ratio increased in 2011, 2013, 2016 and 2017 -- and recent statistics suggest a continuing downturn in Chinese consumer spending.

The country's nominal year-on-year growth in retail sales of consumer goods for January and February was 9.7%. National Bureau of Statistics spokesman Mao Shengyong said that it showed solid consumption. The real growth figure, which would normally be released at the same time, was omitted on this occasion. Chinese economists estimate real growth for those two months at 7.7%, which would be the slowest since 2003.

Personal consumption grew 5.4% last year, down 1.4 percentage points from the increase in 2016. Consumer spending over the Lunar New Year holiday showed the slowest growth under the current calculation method. Smartphone shipments declined in 2017 for the first time. Consumer spending contributed 3.1 points to the economy's real year-on-year growth rate of 6.8% in the October-December quarter, the least since 2015. 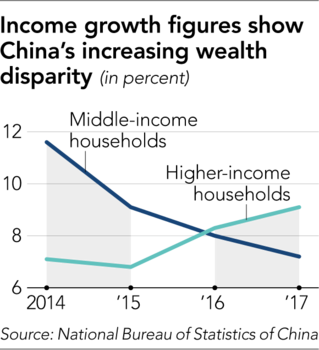 Chinese household debt reached 47% of gross domestic product at the end of June 2017, Bank for International Settlements data shows. Though low compared with developed economies, the figure soared 28 points over a decade. Actual debt load likely is higher, as homebuyers often borrow money from relatives. This rise resembles the debt buildup in the U.S. before the financial crisis of 2007 and 2008, which originated in the subprime mortgage market.

Rising property prices are widening the gap between China's rich and poor. Wealthy residents of Beijing and Shanghai who own many properties have benefited. Government data shows slower growth in middle-class incomes, while upper-class income growth accelerated in 2016 and 2017. China's Gini coefficient, an indicator of income inequality, has increased in each of the past two years.

The trend likely worries Xi's government. In March, the National People's Congress announced plans to raise the minimum threshold for taxable income, apparently looking to reduce the tax burden on ordinary citizens. But the scale of the loan problem suggests this will fall far short of a solution.

When asset prices rise to unreasonable levels, someone must bear the burden. When Japan faced an asset bubble in the 1980s and early 1990s, it forced prices to drop through measures such as monetary tightening, hitting banks that had relied on the use of high-priced land as collateral. Beijing has studied Japan's example and apparently sees forcibly bursting such bubbles as a mistake.

China's Communist Party has used its expansive powers deftly to keep the property bubble under control. But in preventing the market from undergoing a natural correction, it has simply kicked the can down the road -- with consequences such as depressed consumer spending.