Apartment blocks are seen in smog on the outskirts of Tianjin. Chinese President Xi Jinping called for paying more attention to the quality rather than the quantity of growth, urging a focus on protecting the environment and addressing poverty.   © Reuters
ISSAKU HARADA, Nikkei staff writerJanuary 29, 2018 15:50 JST | China
CopyCopied

The Inner Mongolia Autonomous Region admitted to inflating its 2016 fiscal revenue by 53 billion yuan ($8.37 billion at current rates) -- a quarter of the reported total -- and industrial output by 290 billion yuan, or 40% of the total. The region's gross domestic product data will likely be adjusted as well.

Tianjin slashed the reported 2016 GDP of an economic development zone from 1 trillion yuan to 665.4 billion yuan -- a reduction equivalent to 20% of the entire city's GDP. "Economic activity by companies with their registered headquarters in Tianjin but factories in other provinces was counted in GDP," a municipal government source said.

The wave of downgrades began in January 2017, when the northeastern province of Liaoning acknowledged padding fiscal revenue. Many China watchers see the revisions so far as still just the tip of the iceberg.

The National Audit Office said in December that a total of 10 cities and districts in Hunan, Yunnan and Jilin provinces and the city of Chongqing inflated their fiscal revenues by a total of 1.5 billion yuan. The Central Commission for Discipline Inspection, China's graft watchdog, has also said it found data fabrication in Jilin Province.

Chongqing cut its 2017 revenue projection from 87.1 billion yuan to 83.5 billion yuan. The Hunan Province city of Chenzhou reported a 12% rise in nominal GDP last year but a 14% drop in fiscal revenue. Yunnan Province said fiscal revenue grew 7% for the 11 months through November but plunged 15% in December. Though no data fabrication was acknowledged in any of these cases, the Audit Office report likely prompted officials to make adjustments. 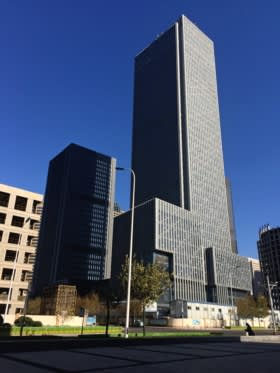 The GDP of an economic development zone in Tianjin was inflated.

Career progression for Chinese bureaucrats long hinged on economic and tax revenue growth in the areas under their jurisdiction, creating a growth-above-all mindset that encouraged book-cooking. The total reported GDP of China's 31 province-level divisions routinely came in higher than the national GDP figure calculated by the central government, with the gap reaching nearly 7% in 2012.

At the Communist Party congress in October, President Xi Jinping called for paying more attention to the quality rather than the quantity of growth, urging a focus on protecting the environment and addressing poverty. Some regional governments have begun evaluating bureaucrats on such non-economic benchmarks.

Reforms being implemented next year will have the National Bureau of Statistics, rather than local governments, take the lead on calculating provincial GDP figures. Tougher penalties may also be imposed for data fabrication, which could lead officials to conclude that they would be better off releasing the real figures.

The recent spate of corrections to regional GDP data may cast further doubt on the national statistics put out by the central government.

Since the GDP figure for China as a whole is calculated by the National Bureau of Statistics, "corrections to regional data won't affect the reliability of the national data," bureau Commissioner Ning Jizhe said. But some of the statistics on which the GDP calculation is based are supplied by regional governments, meaning that revision of these figures could make a difference.

Monthly data on industrial enterprises put out by the bureau showed a 30% year-on-year plunge in operating revenue in November -- a marked slowdown from the double-digit growth seen through last summer. This drop-off also contradicts data showing a 6% increase in industrial output that month. Even some in China contend that the discrepancy owes to multiple government bodies all taking steps at once to address data faking.

The central government has long been suspected of manipulating the GDP deflator, an indicator of price movements that shows the difference between real and nominal GDP. Real gross domestic product growth has hovered within a narrow range since July-September 2014, varying by just 0.1 or 0.2 percentage point between quarters. Since China does not provide a detailed breakdown of the factors that go into calculating the deflator, some suspect the government may adjust it to make growth look more stable.

The Inner Mongolia Autonomous Region and the city of Tianjin, both of which recently admitted to data manipulation, together account for 5% of China's GDP. Applying the adjustments made by the two regions would lower the national GDP figure for 2016 by an estimated 0.8%.

The impact could spread further. The city of Chongqing and the provinces of Liaoning, Hunan, Yunnan and Jilin have all been accused of or acknowledged local or provincial book-cooking. Together with Inner Mongolia and Tianjin, they generate 18% of China's GDP.