BEIJING -- Japanese and Chinese authorities are set to agree on creating a framework to exchange auditing information on Friday, a major step toward allowing Japanese companies to issue yuan-denominated bonds in mainland China.

The issuance of so-called panda bonds will make it easier for Japanese banks and companies to raise funds in yuan, and boost their competitiveness in China. Japan's Financial Services Agency and China's Finance Ministry will agree Friday to create this framework that will be similar to those the FSA has signed with other countries.

The AIIB is 'very likely' to tap the global bond market

What's in a smile? Xi's rapport with Abe reflects standing at home

When it comes to rate hikes, Asia still follows the US lead

Japanese companies have issued yuan-denominated bonds in China before through their local subsidiaries, but this will be the first time that their Japan-based headquarters will issue bonds directly.

In general, parent companies have higher credit ratings than local subsidiaries and should be able to raise cash more cheaply. 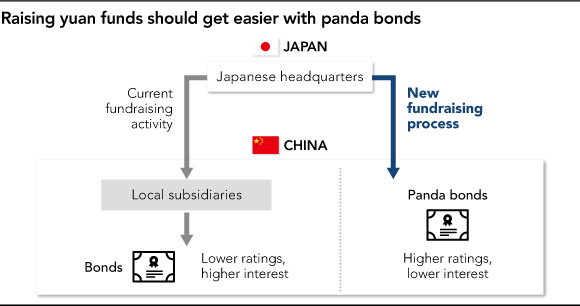 The Bank of Tokyo-Mitsubishi UFJ -- the core subsidiary of Mitsubishi UFJ Financial Group -- and Mizuho Bank have already applied to Chinese authorities for panda bond issuance. Both hope to issue as soon as they obtain approval as they see greater business opportunities in China. Governments and corporations in other countries such as Germany, Canada and South Korea have already issued panda bonds. Among foreign businesses in China, Daimler has raised funds through panda bonds.

Once the regulation is in place, the People's Bank of China, the country's central bank, will ultimately have the final say in the issuance of panda bonds by each company. Although China and Japan made a comprehensive foreign exchange agreement for the yuan in December 2011, that program had stalled because relations between the two countries deteriorated significantly after a flareup over the Senkaku Islands, which China claims and calls Diaoyu.

Under that yuan deal, China and Japan agreed to cross-hold government bonds and to allow the Japan Bank for International Cooperation to issue panda bonds in China, although neither has materialized. But in May, the two governments again agreed to expand monetary cooperation at the China-Japan Finance Dialogue.

For China, panda bonds will help globalize the yuan, and alleviate growing fears over capital flight as the U.S. Federal Reserve hikes interest rates. The move is also aimed at drawing foreign capital into China. Bilateral relations between China and Japan are on the mend.

There are now hopes that nonbank Japanese companies will be next in line to issue panda bonds in China. Diversified access to yuan will help Japanese companies deal with risks such as a sudden tightening of foreign exchange rules by the Chinese government, which could make it difficult for them to transfer money from Japan onshore.

Also, if Japanese companies issue yuan-denominated bonds in China rather than through their local units, it will be less costly because parent companies usually have higher credit ratings.

According to Swift, the global bank payment messaging network, Japan accounted for a mere 0.78% of yuan-denominated transactions outside mainland China in October, coming a distant 9th behind Hong Kong, the U.K., Singapore and others.

Bilateral relations between China and Japan are on the mend after Chinese President Xi Jinping began his second term as party leader following a key Communist Party Congress in October. At the top of his priorities, Xi wants to build an equal relationship with the U.S. and there are hopes that this means he will want warmer relations with China's neighbors.

Meanwhile, Japan wants to improve relations with China, as tensions in the region have heightened due to North Korea's nuclear and missile tests.  Japanese Prime Minister Shinzo Abe is now showing a willingness to cooperate with China's Belt and Road Initiative, whereas before, he had been cool to the idea.

Xi and Abe held talks in Vietnam in November. This month, both sides made major progress in talks on measures aimed at preventing accidental maritime and air clashes between the Chinese Japanese forces.