TOKYO Russia has commenced shipments of liquefied natural gas from the Arctic as part of one of the world's largest LNG development projects, and it owes China a big "thank you."

China clearly had its own growing appetite for energy resources in mind. But it almost certainly also factored in future development opportunities and the use of the Northern Sea Route along the Russian Arctic.

"A fantastic sight," Russian President Vladimir Putin said on Dec. 8, when asked what he thought of the airfield in the Yamalo-Nenets village of Sabetta, where the plant is situated. Putin said he was confident the next phases of the plant would proceed quickly. 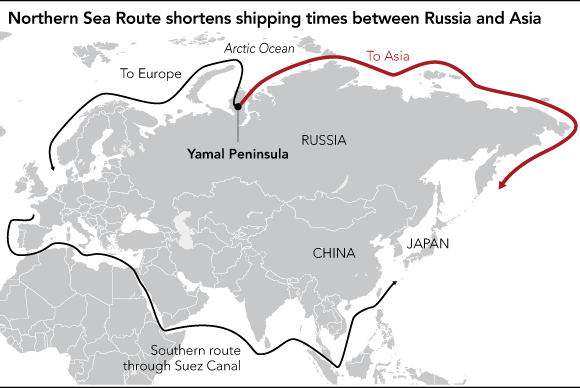 BARGAINING POWER The Yamal LNG project hit a snag in 2014, when Russia annexed the Crimean Peninsula and the U.S. and European Union retaliated by enacting economic sanctions. The penalties made it difficult for Novatek to procure funds from Western financial institutions.

China offered a helping hand through the Silk Road Fund in 2015, providing 730 million euros ($858 million at the current rate) to Novatek. In a policy document released this past June, the Stockholm International Peace Research Institute concluded that China had become the main source of funds for Russia's Arctic Ocean development, bankrolling 60% of the Yamal LNG project when credit lines extended by the Export-Import Bank of China and the China Development Bank are also considered.

One reason is that China wanted to boost its bargaining power, according to Daisuke Harada of the Japan Oil, Gas and Metals National Corp., or Jogmec. The Northern Sea Route around Siberia is also of interest to a China that has been actively expanding its maritime presence, mainly in the South China Sea and Indian Ocean.

Traveling to Asia from Yamal via the northern route takes 15 days, according to Total -- half the time needed for the route through the Suez Canal. The downside is the high cost of operating icebreaker tankers. By working with Novatek on the Yamal LNG project, CNPC can gain experience with transportation and more quickly determine the practicality of the route.

Global warming could make the route a lot more useful, Harada noted. The Arctic Ocean is closed by ice during the winter now, but higher temperatures could bring a day when the Northern Sea Route is open to navigation year-round.