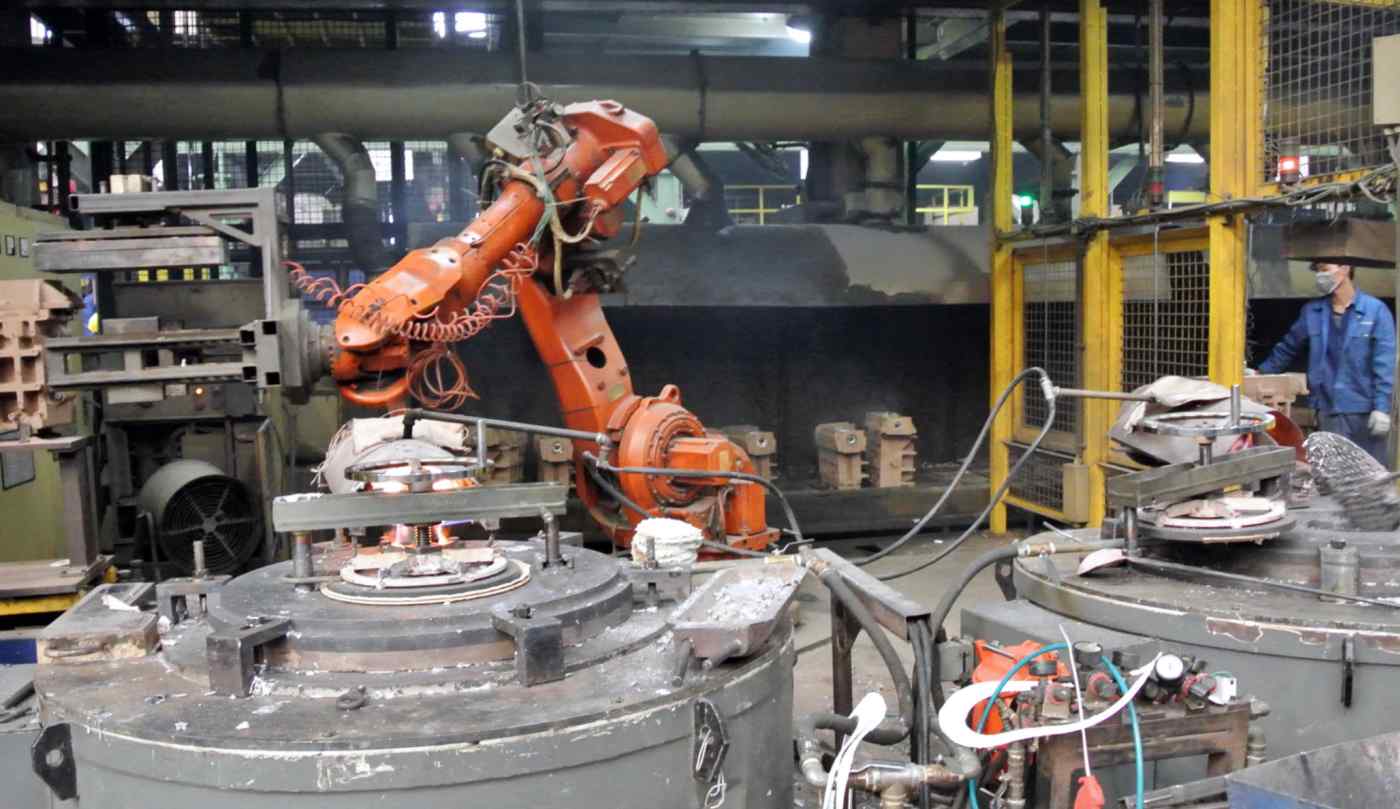 TOKYO -- Having grown into the world's factory through an abundance of cheap labor, China is now rushing to introduce industrial robots in response to rising wages and a worker shortage created by its one-child policy.

The casting industry is dangerous for humans because the work involves melting metal at high temperatures. A robot with multiple joints, like a human arm, can effortlessly carry molds weighing tens of kilograms and weld metal sections together quickly.

Six of these robots make automobile engine parts and other components at a foundry of Suzhou Mingzhi Technology in China's Jiangsu Province. Plans call for installing grinding robots this year. The manager expresses hope that robots will improve productivity, given the limits to what can be done by hand.

Japanese robot manufacturer Nachi-Fujikoshi drew a larger-than-expected audience when displaying its latest wares at a Jiangsu Province factory this past December. Representatives from 20 or so local businesses, including foundries and bolt-processing companies, showed up. Their eyes were glued to robots performing such tasks as assembly and painting with speed and accuracy.

The International Federation of Robotics estimates that China will install 28,000 robots this year -- as many as Japan. The Chinese tally will grow to 34,000 units in 2015, surpassing the Japanese figure by some 3,000 units to take the top spot globally, according to the organization. Back in 2005, China installed just 4,500 units.

A personnel shortage is one reason for introducing robots. The manager at Mingzhi Technology says the harsh working conditions often lead young people to quit after less than three months. The Chinese population of 15- to 59-year-olds began shrinking in 2012 as a result of the one-child policy. And increased education levels have caused young people to shun dirty, difficult and dangerous work.

Rising wages also come into play. The Chinese leadership aims to double national income per capita from 2010 levels by 2020. Wages in Suzhou and surrounding areas have nearly doubled from five years ago.

Japan's Yaskawa Electric says one of its multijoint robots can replace two workers, allowing the costs to be recouped in two years. Five years ago, recouping the outlays took three or four years. Robots have grown more attractive as labor costs rise.

The Chinese government has been pulling out all the stops to cultivate a homegrown robotics industry, including the training of engineers and industry development. Robots can contribute to better efficiency and quality, which meshes with the leadership's focus on the quality of growth under the five-year plan through 2015. Manufacturing in China is at a turning point, the head of Yaskawa's operations there argues.

Chinese users point out that system configuration and maintenance need addressing. Automation lines matching the needs of clients must be configured to make the most of robots, but China lacks enough engineers for such tasks.

The Changzhou Institute of Mechatronic Technology in Jiangsu Province set up a robotics-engineering unit last May. Yaskawa and Denso supplied a total of 17 robots to give students hands-on experience in operating them for such tasks as welding, transport and assembly.

Chinese universities and state-backed research institutions have been studying robots for more than a decade, and the fruits of their efforts are starting to show. A startup, Siasun Robot & Automation, increased its sales by about 30% to 1.04 billion yuan ($164 million) for 2012 by selling robots for welding, painting and transport at automobile plants.

The ranks of Chinese corporations entering the robot business have been growing since around 2010. Although their offerings are still years behind the latest models from Japan and Europe, with more experience they could eventually catch up.