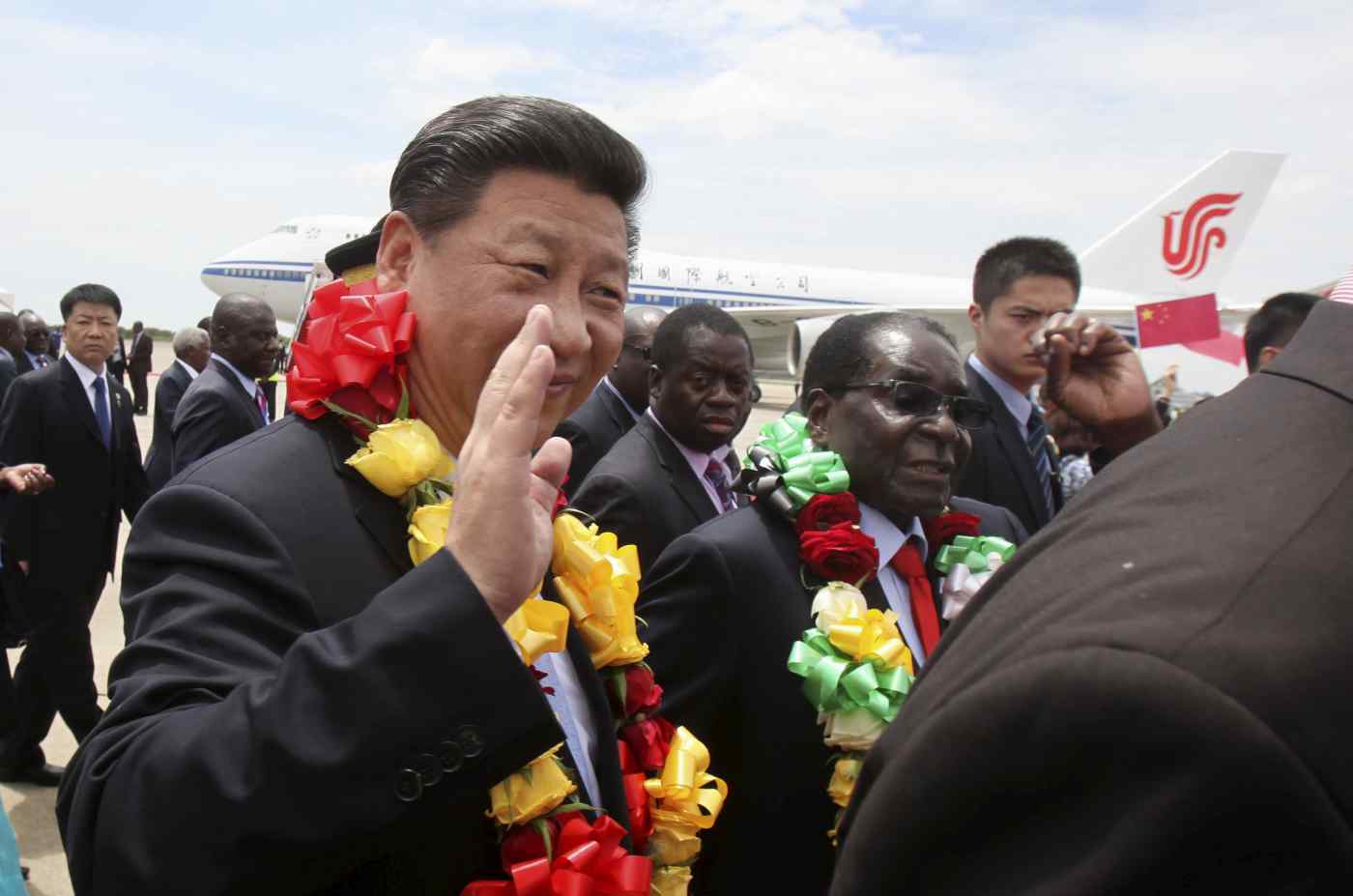 BEIJING/TOKYO -- China on Thursday urged Zimbabwe to avoid violence after the military took control of the country this week and placed 93-year-old President Robert Mugabe under house arrest.

Beijing, Mugabe's strongest international ally, called for a peaceful resolution to the crisis which erupted on Wednesday when the army seized power in what some observers regard as a coup against the president and his 52-year-old wife Grace Mugabe, who is seen to have developed an increasingly powerful role in Zimbabwe in recent years.

But in its public statements, the Chinese leadership carefully avoided taking sides between Mugabe, who has ruled Zimbabwe since it gained independence from the U.K. in 1980, and the military leaders headed by General Constantino Chiwenga. Military vehicles and soldiers patrol the streets in Harare on Nov. 15.   © Reuters

He also indicated that Beijing remained committed to maintaining close political and economic ties with Harare, even in the face of a possible change of leadership. Geng said: "The friendship between the two countries spans all directions and [China's] friendly policy towards Zimbabwe will not change."

Beijing has described a visit by General Chiwenga to China last week as "a normal military exchange" in a bid to dispel any impression that Chinese leaders may have been given prior warning of the Zimbabwe army's intentions.

The military action comes in the run-up to presidential elections next year in which Mugabe is the ruling Zanu-PF party candidate, even though he has recently been seemingly preparing for his wife to succeed him. The army intervened a week after Mugabe sacked Emmerson Mnangagwa, his vice-president and a veteran of Zimbabwe's liberation fight, in a move that appeared to reinforce Mrs Mugabe's position. Mnangagwa had fled to South Africa and said he would challenge the rule of Mugabe, who was using Zanu-PF as his "personal property".

The military takeover has evoked cautious responses in the U.S. and in the U.K., with both countries urging calm and advising their citizens in Zimbabwe to stay off the streets. President Jacob Zuma of South Africa, the most powerful of Zimbabwe's neighbors, on Thursday called for a crisis meeting of the Southern African Development Community, the regional cooperation organization. President Robert Mugabe listens to his wife Grace Mugabe at a rally of his ruling ZANU-PF party in Harare on Nov. 8.   © Reuters

The crisis represents a serious challenge to China's political and economic ambitions in Africa, where, according to the official Xinhua news agency, it has invested $100 billion in recent years. Beijing has focused a lot of attention and funds on Zimbabwe. Mugabe opened the door to China after having alienated his former allies in the West by adopting increasingly radical policies including the seizure of land from white farmers.

While no U.S. president has visited Zimbabwe, Chinese President Xi Jinping did so during an African tour in 2015 in which he emphasized Beijing's growing commitment to the country, offering economic support while avoiding the human and political rights criticisms aired by the U.S., the U.K. and other Western governments.

China quickly became the largest foreign investor in Zimbabwe, with projects including power stations, hospitals and a national stadium, as well as a pledge to construct a new national parliament building. The Zimbabwe Investment Authority approved $929 million in foreign direct investment in 2015, with more than half of that from China, reported Xinhua. While South Africa has remained Zimbabwe's largest trade partner, China has grown as both an exporter and importer.

However, Beijing has grown increasingly aware of the dangers of its presence in Africa, which involves the deployment of tens of thousands of Chinese officials, engineers and manual workers. In a commentary published online on Thursday by Global Times, a state-run newspaper, author Wang Jiamei wrote: "A risk warning mechanism is needed for China's investment in Africa."

He added: "Even before this turmoil, Chinese investment was facing risks in Zimbabwe, given the country's economic woes and the collapse of its financial system. Zimbabwe is not the only African country with high risks of political and economic instability."

The latest developments will clearly be a test for president Xi, who once said that China was Zimbabwe's "all-weather friend".