As Japan's capital grows more cosmopolitan, foreigners take a liking to it TOKYO -- Immigrants to the U.S. state of California often settle in Los Angeles. Among those who find their way to New York City, the borough of Queens is popular. What about in Japan? Surely it has its own immigrant magnets.

Time was when Toyota in Aichi Prefecture and Hamamatsu in Shizuoka Prefecture drew large numbers of Brazilians and Peruvians. The auto industry brought them to these cities. But the past decade has seen a steady increase in migrants from China, Nepal and India who prefer to live around Tokyo. The megalopolis makes it easier for them to find jobs, meet fellow countrymen and maintain their ways of life.

As of the end of December, 53% of Chinese residents of Japan were living in Tokyo or its three surrounding prefectures, according to the Immigration Bureau. The share for Indian residents living in greater Tokyo was 64%. Altogether, there were 2.56 million foreigners residing in Japan at the end of last year.

The concentration of foreign residents in greater Tokyo reflects an economic transformation that began after the Lehman shock of 2008: Japan's manufacturing sector, that great postwar generator of wealth, started to struggle more than ever before, while tourism, finance, information technology and other service industries ascended. The face of Japan's foreign community has also changed.

As recently as the early 1990s, ethnic Koreans accounted for more than half of the foreign residents in Japan. Later, a tweak to the immigration law began having its intended effect, and the descendants of Japanese who long ago emigrated overseas began coming to Japan in waves to help ease the manufacturing sector's labor shortage.

By 2007, the share of Brazilian and Peruvian residents of Japan had risen to more than 17%. Then came the Great Recession, which chased many South Americans back home.

A decade ago, the Queens of Japan was Osaka's Ikuno, home to the nation's oldest and largest ethnic Korean community. Toyohashi, a city near the nation's auto manufacturing hub in Aichi Prefecture, had the sixth-largest concentration of foreign residents.

By December 2017, Ikuno dropped to seventh place, as its foreign population fell 13%. Toyohashi dropped to No. 22.

What's No. 1? Shinjuku, one of Tokyo's 23 central wards. Its foreign resident population was up 46% over the previous 10 years. Another Tokyo Ward, Edogawa, is No. 2, with its FRP up 55% during the same period. Kawaguchi, a city north of Tokyo, had 87% more foreign residents than it did at the end of 2007. 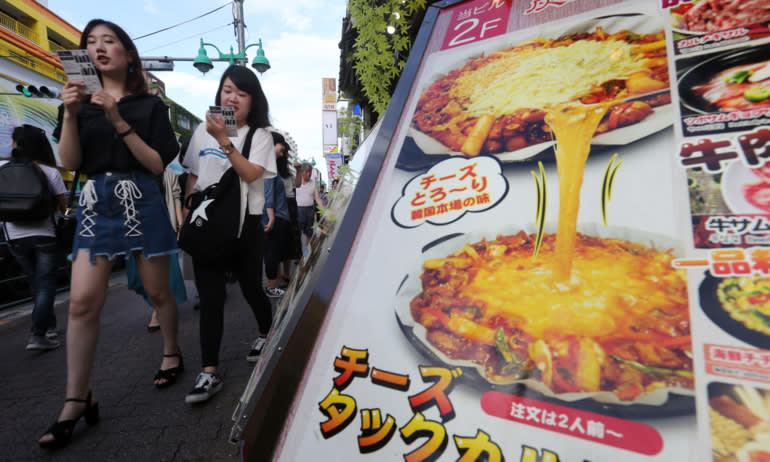 Shinjuku Ward's Koreatown is giving way to new fast-food fusion treats, like this melted cheese-covered plate of calories. It is also a magnet, for people from China, Vietnam and Nepal. (Photo by Ken Kobayashi)

Shinjuku is both famous and infamous. Its main railway station is the world's busiest, accommodating more than 3 million commuters every day. The red-light district of Kabukicho is a short walk from the station. So too is Golden Gai, where more than 200 tiny bars and eateries dot a section of short alleyways. Shinjuku Ni-Chome is known as an LGBT hangout.

Shinjuku is also home to Waseda University, one of Japan's most prestigious schools, time-honored department stores like Isetan and to the Tokyo Metropolitan Government.

One part of the ward is known as Koreatown. By 2012, however, the ward's Chinese population eclipsed that of Koreans. These newcomers are mostly students, attracted by the availability of cheap accommodation, a raft of casual jobs, and numerous language and vocational schools.

These new residents tend to stay on their own and do not interact with locals, which poses a challenge to the creation of a more cohesive community that might be able to settle disputes arising from noise and the disregard of Japan's hallowed trash collection schedule. A similar challenge exists in Kawaguchi, a bedroom community just north of Tokyo. Chinese now account for 60% of the city's 33,000 foreign residents. With the growth of this population, many Chinese-run restaurants and grocery stores have sprung up, making parts of the city look like a little Chinatown.

The reasons Chinese are concentrating in Kawaguchi include the city's easy access to Tokyo, inexpensive property and the existence of large public housing blocks. Public housing can be rented without a guarantor, a commission fee or so-called "key money," making these units a popular choice among foreign workers.

Many Chinese work for Japanese companies and earn good incomes. Others run their own businesses, often in the information technology sector. Once they save enough money, they move out of public housing and buy their own places in and around Kawaguchi. "They feel more secure when they have their own house," a local Chinese realtor said. "This is not their own country, after all."

Chinese residents rarely set up ethnic organizations, nor do they participate in existing neighborhood groups, making it hard for Japanese and Chinese to get to know each other. "We want to create venues where foreigners and locals can interact with each other," said Michihiro Kawano, a Kawaguchi city official.

Kawano sees the growing Chinese presence as an asset, raising hopes that it could grow into a little Chinatown and attract visitors. "There hasn't been any increase in crime or in the number of Japanese moving out the city because of the increase of Chinese," he said. 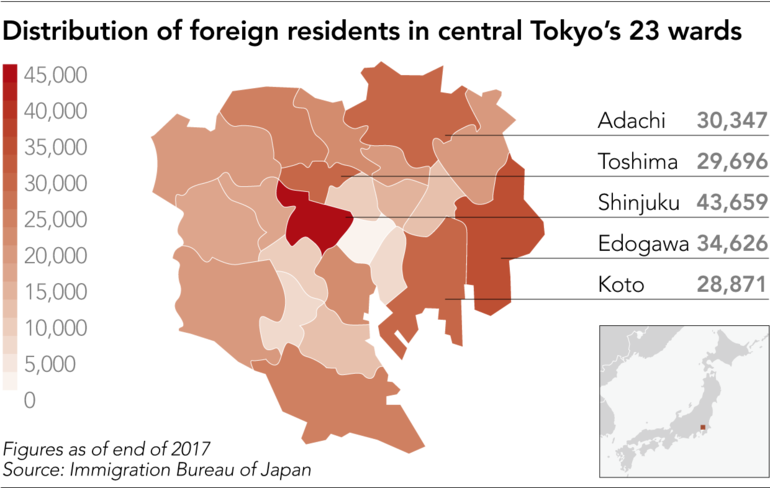 Meanwhile in Edogawa, an eastern Tokyo ward, an Indian community is taking shape under the leadership of Jagmohan Chandrani, a 65-year-old trader from Kolkata.

With a total of 3,887 Indians living there as of July 1, Edogawa is growing into a Little India. Many Indian IT workers choose to live in Edogawa because of its proximity to Tokyo's financial district, Otemachi. A large number of public housing complexes has also attracted foreigners.

There were few Indians in Tokyo in 1978, when Chandrani first came to Japan. As their numbers grew, it became clear that the neighborhood needed amenities to support their lifestyles. Food was a particularly important issue because many Indians are vegans.

Now the neighborhood has Indian restaurants, grocery stores, two international schools for Indians, a guesthouse and a Hindu temple. Festivals are organized in public parks in spring and autumn, in line with Hindu traditions celebrating good harvests.

"People are not machines," Chandrani said. "People have to work, but they have to live also."

One challenge facing the community is illustrated by its decision to hold the autumn festival only during the day. This is in deference to Japanese residents who did not like the noise.

Diwali, the autumn festival, is known for its lights and is supposed to take place in the evening. It attracts thousands of visitors, but a ward official said some neighbors were not pleased with a large religious event taking place in a public park late in the evening.

Building a rapport with locals remains a work in progress.

Edogawa may be part of Tokyo, "but for our culture," Chandrani said, "it is a frontier town."