SHANGHAI -- Chinese consumers spent 926 billion yuan ($146 billion) shopping and in restaurants during the Lunar New Year holidays of 2018 -- 10% more than during last year's holiday season, according to the Ministry of Commerce.

It was the weakest spending growth for the New Year period since 2005, as a real estate slowdown and stock market turbulence ahead of the holidays may have left investors feeling less wealthy than in the past.

Holiday spending further cemented the shift from brick and mortar stores to online sites. It also showed more Chinese opting to go on leisure trips instead of spending the week in their hometowns.

This year, workers had from Feb. 15 to Wednesday off. During this period, a total of 768 million people used Tencent Holdings' WeChat Pay app to send New Year's gifts of cash to friends and family. Major online retailer JD.com saw orders for fruit and other fresh foods double ahead of the holidays, tracking an increase in online gift purchases.

Travel surged 12.1% from last year, with 386 million Chinese taking trips, according to the China National Tourism Administration. Those travelers spent 475 billion yuan, or $75 billion, up 12.6%

A 30-something man from Anhui Province led his young son around Shanghai's famed Yuyuan Garden and an adjoining tourist market on Tuesday afternoon. "We spent yesterday at Shanghai Disneyland -- today's a change of pace," the father said. Sightseers and groups of travelers thronged to the attraction. The garden draws some 200,000 visitors a day during the holidays.

A record 6.5 million travelers are estimated to have headed abroad this year. A young Shanghai woman took her first-ever trip to Japan during the week, spending five days visiting Tokyo, Kyoto and Nara. "I want to get out of major cities next time, maybe to a hot spring," she said. The trip cost around 15,000 yuan overall, including 7,000 yuan for airfare. 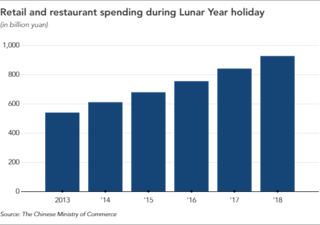 Even those who went home for the holidays shelled out for entertainment. China's box-office receipts jumped 60% on the year to more than 5 billion yuan, according to cinema research firm EntGroup. The number of Chinese moviegoers dropped off in 2016 and early 2017, but a succession of hit films has since brought them back to theaters.