Demand for homes in Thailand is growing among middle-income Chinese buyers drawn in by the low cost of real estate relative to mainland China.

Although Chinese buyers still account for a relatively small proportion of the overall Thai market, we estimate they are behind as much as 50 per cent of purchases in developments in holiday resorts such as Chiang Mai and Phuket.

That said, and despite growing underlying demand for Thai real estate, we expect purchases to weaken following the tightening of capital controls by the Chinese authorities, and to remain so as long as the renminbi faces depreciation pressure.

Priced out at home, a growing number of Chinese are looking to buy real estate in Thailand, an FT Confidential Research survey of 108 investors has found.

This is not about capital flight driven by China's ultra-rich: the typical buyer is young and only moderately wealthy.

Such buyers may have been drawn to Thailand first as a holiday destination - 27 per cent of tourists to the country last year were from China, by far the biggest group - but they are investing because of the relatively low cost of Thai housing stock.

According to our most recent survey of outbound Chinese investment, Thailand was the fifth most popular destination for real estate investment, along with Hong Kong and New Zealand.

Demand is growing: a third of respondents said they intend to buy additional Thai property in the next two years.

However, tighter capital controls are already having an impact on inflows and will continue to do so until the government feels comfortable that the renminbi is no longer under significant pressure to weaken.

A small but growing part of the market

Such purchases represent a small but growing chunk of the Thai real estate market. We estimate that Chinese buyers account for no more than 5 per cent of total sales in Bangkok, rising to 10 to 20 per cent of sales in the holiday resorts of Chiang Mai, Phuket and Pattaya.

In some key developments in these destinations, such as D Condo Nim in Chiang Mai and Centric Sea in Pattaya, Chinese buyers can account for as much as 50 per cent of the total, local agents told FT Confidential Research.

In these markets, it is likely that demand from China is pushing up prices, particularly in Pattaya where it appears that 10 to 15 per cent of sales are to Chinese buyers. But at the national level and in the capital we see no evidence yet that this trend is affecting the housing market more broadly. This could change if demand keeps rising and capital controls are relaxed: as recently as 2010, almost no Chinese were buying homes in Thailand.

Most of our respondents (63 per cent) paid less than Rmb1m ($145,386) for their homes, with 22 per cent spending less than Rmb500,000 (see chart). The lower end of this range buys a new studio apartment outside central Bangkok while the higher end is enough for a new one-bedroom unit in a prime area of the capital. Around a third of buyers spent more: Rmb5m is enough for a Bangkok penthouse or a four-bedroom beachfront villa in Phuket. 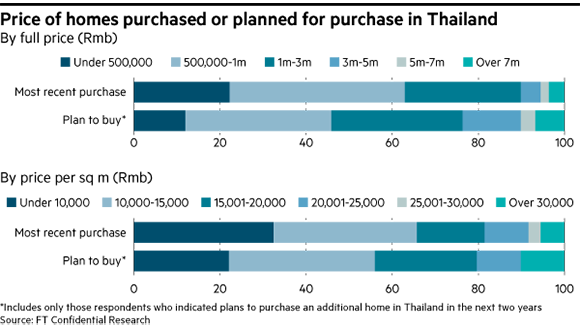 Respondents also indicated a willingness to spend more on their next Thai property. This partly reflects the expectation for property values to continue rising, as they have steadily for almost two decades following the 1997 Asian financial crisis.

Mr Cong, a 35-year-old Shanghai resident, will soon take delivery of his second Thai apartment, a 31 sq m studio in central Bangkok, for which he paid approximately Rmb500,000. He bought off-plan based on the development's popularity with Chinese buyers - they own roughly 250 of its 900 units. He already owns a studio apartment in Pattaya.

Mr Cong said Shanghai is too expensive on his Rmb18,000 monthly income while Thailand offers reasonably high rental yields and an infrastructure to support Chinese buyers.

"This is just like China in the 1980s: everything is waiting for a great boom," he said.

For their most recent purchases, 29.3 per cent of respondents chose Bangkok, followed by Chiang Mai (21.8 per cent), Phuket (17.3 per cent) and Chonburi (15.8 per cent), which is home to the city of Pattaya (see chart). Along with an additional 6 per cent in the coastal corridor between Cha-am and Pranburi, popular for beaches, these locations account for 90.2 per cent of all homes bought by our respondent base. However, Phuket ranks significantly higher among those who plan to buy an additional unit in the next two years, surging to 26.8 per cent, well ahead of Chiang Mai (19.5 per cent). Phuket is widely viewed as Thailand's most important tourist destination after Bangkok and has the busiest airport outside the capital. FTCR observed significantly more investment-oriented property development in Phuket and Pattaya than in Chiang Mai.

Kevin Wu, a Chinese-born agent with TG Condo agency, said renminbi weakness against the dollar and high prices at home are driving demand. He meets around 20 Chinese customers a month, most of whom are not wealthy, looking to buy apartments to let, preferring 30 to 40 sq m units priced at Rmb500,000 to Rmb700,000.

"Most Chinese are buying homes in Thailand as an investment so the first consideration is location. They also prefer to pay in cash," he said. The shutters come down

The immediate outlook for Chinese investment flows into Thailand is negative. China's government tightened capital controls at the end of 2016 to curb outflows and defend the renminbi without burning through more foreign exchange reserves.

Despite the porous nature of China's capital controls, we believe the latest moves have deterred the kind of transactions that allow middle-income Chinese investors to buy into Thai real estate.

Wealth managers and bank officials have told FTCR that many clients have fallen foul of the government's tighter controls, with some banned from accessing their $50,000 foreign exchange quota for two years for violations such as pooling the quotas of family and friends. Underground banks, which facilitate outflows by bypassing the capital controls regime, have also raised their fees in response to the clampdown, further deterring transactions.

Agents in Thailand also say the volume of inquiries has fallen in the wake of the crackdown. In this new climate, we expect investors to delay plans to purchase more Thai real estate, at least until the dust settles, if not until the Chinese government loosens up again.

Underlying demand for Thai real estate may appear robust but some investors could abandon their plans entirely in the wake of the clampdown.

This article was first published on Jan. 27 by FT Confidential Research.