SHANGHAI -- China's real estate binge has left it with a stock of unsold homes so big that their combined floor space is the size of Singapore. How did things get so bad? And how can the housing market's precarious balance of supply and demand hold?

In a village an hour-and-a-half drive north of Chongqing, a sprawling inland municipality in southwestern China, a two-story mud-walled farmhouse stands deserted.

An old-fashioned cooking stove gathers dust in one of the rooms. Natural gas arrived in the village only in 2013, the old man living across the way says.

People lived here until a few years ago. Only a bare-bones desk and a few other things remain.

The old man's house looks mostly the same. He pays no heed to a posted notice warning that the place is too dangerous for habitation.

The home's former residents now live in northern Chongqing. The husband, 37-year-old Wang Qiang, works as a cook. His wife cleans hotels and apartment buildings to contribute to their annual income of a little over 80,000 yuan ($12,000). Their home back in the village, which they moved out of about a decade ago, provided little relief from the summer heat or the winter cold. They earned about 10,000 yuan a year growing corn and raising pigs.

"We couldn't go on living there," Wang said. "It was just so poor, we left in hopes of something."

Wang learned to cook working as a kitchen assistant. The couple bought an apartment three years ago for 600,000 yuan. They scrimped and saved 370,000 yuan for a down payment, and now pay about 2,000 yuan a month on their mortgage.

Now, they make ends meet. An annual subsidy of several thousand yuan, collected for participating in a farmland reforestation program, helps them get by.

China's urban population has overtaken its rural population. Economic stimulus poured on after the 2008 global financial crisis inflated a real estate bubble that produced, in the most egregious examples, entire ghost towns.

Some 600 million people still live in farming villages; around a third of them will eventually migrate to cities, analysts say.

While the farmhouse that the Wangs left may be an extreme case, village life is arguably short on modern comforts. People know that the life awaiting them in the city may not be the glamorous one portrayed on television, but they still hope for something better. Such personal yearnings drive urbanization.

Not everyone who moves to cities is escaping the farm.

"Once you're married, then you obviously have to buy a home," said a 28-year-old who asked to remain anonymous.

He and his wife live in Chongqing. He left Yunnan Province in China's far southwest to attend graduate school in eastern coastal Zhejiang Province, where he studied mechanical engineering. Despite receiving a job offer from SAIC Motor, the country's biggest automaker, he chose to work at Chongqing-based Changan Automobile to be closer to his partner's job. Neither of them has any connection to Chongqing apart from their work. Before deciding to marry, they had a long-distance relationship while she studied in Xian, a city in central China. Employment at the state-owned manufacturer is steady. With the money his wife earns working for a real estate company -- also state-owned -- the couple takes in about 180,000 yuan a year. They recently decided to buy a 750,000 yuan previously owned apartment.

The husband designs automobile suspensions and other components meant to provide a more comfortable ride -- expertise that puts him in high demand in the world's biggest auto market, where the comfort factor of local cars still leaves something to be desired. He would eventually like to change jobs to advance his career. But the couple decided to buy a house anyway because "while the value may not go up much, we probably won't lose money," he explained

China still has believers in the myth that home prices defy gravity. Thirty-year-old Yu Zhonghuan is one of them.

Though confessing to be the type that spends all of his monthly earnings, he says he wants to buy a home.

Yu's 6,000 yuan monthly pay goes mostly toward good times with friends. In a few years, he will have the option to buy the 400-yuan-a-month rented apartment in public housing where lives now. He reckons that reselling the place will give him enough money for a down payment on a home. 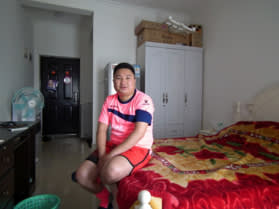 Yu, who confesses to be the type that spends all of his monthly earnings, says he wants to buy a home.

"Everyone around here has become rich buying one or two houses," Yu says.

Urbanization and the belief that real estate prices cannot fall go a long way toward explaining how China's housing market staves off collapse despite predictions that the bubble is ready to burst. Migration from the countryside to cities will continue for some time, but running down inventories of existing homes will take years. Any attempt by authorities to rev up residential investment in hopes of a rush of economic growth could precipitate a crash. For a glimpse of what a housing market looks like after myth gives way to depressing really, China need only look to Japan.