Forex demand rises on expectations the currency will fall another 5.5%

Chinese consumers believe the renminbi will drop to a 10-year low against the US dollar this year, with the exchange rate seen ending 2017 at 7.35, according to an FT Confidential Research survey of 1,000 urban households.

The survey result implies households expect another 5.5 per cent depreciation over the course of this year after 2016's 6.6 per cent fall, a drop that would mark a fourth year of weakness against the dollar and leave the renminbi at a level not seen since the final days of 2007.

This expectation for further weakness is also reflected in the growing number of households saying they would like to hold at least 10 per cent of their savings in foreign exchange (see chart). The FTCR monthly survey, which asks households how much of their savings they would keep in foreign exchange were there no limits, has tracked a steady increase in demand for forex among consumers over 2016. 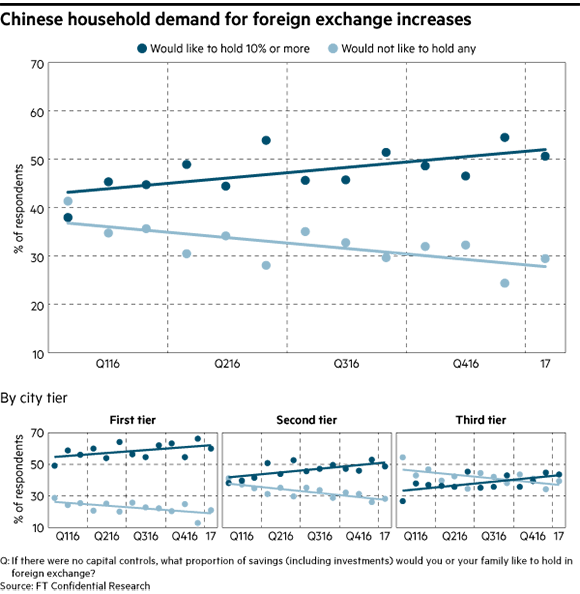 Even lower-income households and residents in lower-tier cities demonstrated increased appetite as the renminbi fell more quickly in the final months of the year. In third-tier cities, the proportion of residents who say they wish to hold at least 10 per cent of their savings in foreign exchange stood at 43.5 per cent in January against 26.7 per cent a year ago.

January's survey nonetheless found a moderate weakening in demand, which FTCR ascribes to widespread coverage about the capital controls imposed by the government in December.

Those controls, which are hampering attempts by households to allocate more of their savings outside China, marked a significant ratcheting up of efforts to staunch capital outflows.

The tightening of capital controls, plus rate hikes in the interbank market, indicate the Chinese government currently has no stomach for a one-off renminbi depreciation, which some of its advisers now openly recommend.

That resolve will be tested in 2017. A combination of hawkish signals from the Federal Reserve and Donald Trump's surprise election victory in November strengthened the dollar in the final two months of 2016, hastening outflows from China and weakening the renminbi.

The dollar has softened in recent weeks but market consensus sees further strengthening as the Fed continues to tighten monetary policy, implying more outflows from China and more renminbi weakness. The threat of trade action by the US against China is also a major risk, particularly if exchange rate policy again becomes a flashpoint in the bilateral relationship.

In the face of considerable uncertainty in 2017, FTCR still expects the government to opt for stability. The governmentBeijing has most recently emphasised tighter controls on outflows rather than continuing to burn through foreign exchange reserves to defend the exchange rate or letting the currency drop further.

The renminbi's weakness is temporary, the government argues, insisting that the currency has remained broadly stable against the basket of currencies that it began publishing at the end of 2015 (the renminbi fell 6 per cent against this basket over 2016 but rose nearly 1 per cent in the final quarter of the year) (see chart).

But Chinese households pay more attention to the daily performance of the renminbi against the dollar than to reports on the basket's performance.

That dollar-centric perception will drive demand for foreign exchange in 2017, forcing the government to continue managing expectations via the exchange rate or capital controls or a combination of the two.

This article was first published on Feb. 7 by FT Confidential Research.