HONG KONG -- China's stock and housing markets may be slowing, but one sector is soaring: garlic. Speculators are once again setting their sights on the vegetable, an essential ingredient in Chinese cooking.

According to a Nov. 9 report from the country's National Bureau of Statistics, the Consumer Price Index in October rose 2.1% from a year earlier. But even the highest growth in six months could not meet Beijing's "around 3%" inflation target for 2016. 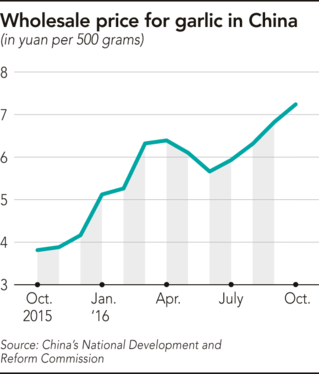 Many sectors in the economy are slumping, or experiencing moderate growth at best. The same cannot be said for garlic.

In China, garlic is planted in October and harvested in May. This year's garlic harvest in Jinxiang County in Shandong Province, the country's major garlic growing area, was 20% less than in normal years due to cold weather, according to reports from the Chinese media outlet Caixin. Experts are concerned that speculators smelling a possible supply plunge are trying to corner the garlic market, the media said.

China's garlic market experienced extreme price surges in 2009 to 2010, too. Domestic demand at that time exploded on rumors that the pungent bulb could prevent or even cure the flu, while growers across the country were hit by severe droughts. As speculative money began pouring in, garlic prices soared more than tenfold over a year.

Back then, Chinese authorities were increasing controls on the housing market, imposing tighter regulations on purchases. As a result, speculators began shifting their money from real estate to farm products -- not only garlic but potatoes, mung beans and pu-erh tea leaves as well. The move triggered food bubbles across China.

With Beijing's restrictions on overseas money transfers hampering outflows of investment, speculators have hopped from one market bandwagon to another inside China, following a cycle of shifting targets.

Since the country's stock market crash last year, funds largely headed to the property market, creating a bubble in housing prices. The government then focused attention on moderating excessive property prices. As hopes for future growth in that segment diminished, investors began returning to the garlic market.

For example, Lontrue, a fruits and vegetables grower and dried fruits and nuts manufacturer, has been drawing investors' attention. The Shenzhen-listed shares of the company have surged as much as 81% over the past six months. In contrast, ChiNext Price Index, an index for innovative startups and tech companies, has seen only 6% growth in the same period. The garlic bubble appears to be significant.

China is a major garlic exporter, and the soaring prices could affect other countries. For instance, China accounts for some 90% of garlic imports in Japan. The average import price of garlic in September was 301 yen ($2.80) per kilogram, up 26% year-on-year. Appreciation of the yen against the yuan has so far moderated the impact on garlic prices in Japan. But speculators' increasing fancy for garlic may gradually affect consumers in Japan and elsewhere.