BEIJING The Chinese government will aim for more moderate growth in 2018 as Beijing focuses on reforms aimed at tackling the structural challenges facing the nation, particularly risks in the financial sector.

Premier Li Keqiang, addressing the National People's Congress in Beijing on March 5, said the country has reached a "pivotal" period in terms of transforming its growth model but that there are still "many hills to climb."

Indicating Beijing's intention to cement its top-down approach to tackling the nation's most pressing issues, Li also told the roughly 3,000 lawmakers that the government is committed to resuming its "three critical battles" against poverty, pollution and financial-sector risk.

"What we need to do is to tackle both symptoms and root causes and take effective measures to defuse potential risks," said Li, referring to illegal fundraising and financial fraud.

Analysts, however, are not entirely convinced of the leadership's commitment to pursuing quality over quantity when it comes to growth. 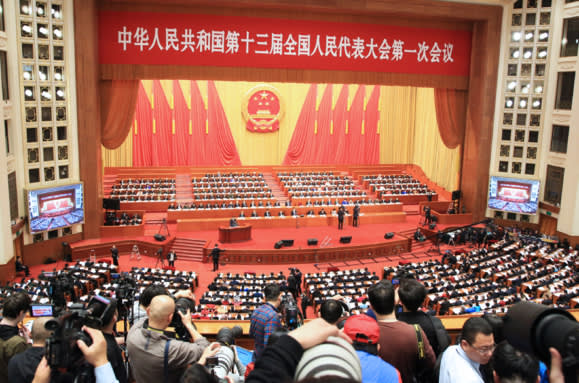 To reduce debt at state-owned enterprises, for example, Beijing has proposed so-called mixed ownership reforms and debt-to-equity swaps. But Martin Petch, vice president and senior credit officer in Moody's Investors Service's sovereign risk group, said in a note that while these measures "may help address corporate-specific financial pressure, we do not expect such policy tools to lead to significant and sustained deleveraging of SOEs."

Economists at research company Capital Economics voiced doubts about the government's resolve on financial risk. "For all the recent talk of focusing less on the speed of growth, we suspect it will return to the forefront of policymakers' concerns if a slowdown threatens to weaken the labor market," they wrote in a report. "For that reason, we're skeptical that the reiterations today that credit risks will be dealt with resolutely will hold up through the rest of the year. If growth slows, credit concerns are likely to be demoted [as a priority], at least temporarily."

China experienced nearly a decade of double-digit growth, fueled at times by aggressive stimulus measures. The gradual slowdown that followed helped the economy avoid a "hard landing" and should give the government more leeway to tackle pressing socio-economic issues.

The National People's Congress, China's largely rubber-stamp legislature, has 10 major agenda items before it this year, including the 2018 government budget, constitutional amendments and the appointment of state-level officials.

While there are skeptics, some economists expect China to get tough on financial system risk by beefing up regulation.

"The central government is serious about improving financial supervision," said Xiao Minjie, a senior economist with SMBC Nikko Securities. He expects Beijing to tighten its grip on so-called shadow banks, nonbank intermediaries providing credit that is often repackaged for sale to investors as wealth management products.

According to Xiao, China is putting less emphasis on fighting real estate bubbles now that housing prices have stabilized. The priority now, he said, will be keeping a lid on financial risks through stricter top-down supervision and less freedom for the market to dictate the flow of capital.

"The central government has already discouraged local governments from using shadow banking, but they kept looking for loopholes," Xiao said. "With serious regulations set to be implemented, local governments are unlikely to risk breaking the rules anymore."

The March 5 meeting was also attended by business leaders from the private sector and state-owned companies. Pony Ma Huateng, chairman of internet company Tencent Holdings, said he hopes to leverage the government's innovation push to sharpen the country's competitive edge. "A digitized China that leads global internet development will be our goal," he told reporters.

Premier Li also reiterated Beijing's "one country, two systems" policy toward Hong Kong and Macau and warned against any activities promoting the formal independence of Taiwan, the self-governing island which China claims as its own territory. Meanwhile, China has budgeted 1.1 trillion yuan for defense, 62.5 billion yuan more than in 2017. This 8.1% increase will go mainly toward equipment, training and improving the welfare of personnel, according to Chen Zhou, research fellow at China's Academy of Military Sciences. The budget marks the first acceleration in defense spending growth in four years.

President Xi Jinping vowed last autumn that China's military would become a first-rate force by the middle of this century. As part of that push, Beijing aims to implement technological improvements that will increase the military's overall strategic capabilities and expand its range.

The country has made significant headway in enhancing its missile capabilities and developing its navy and air force, two branches key to challenging the U.S. in military might. In February, China officially deployed its J-20 homegrown stealth fighter, and acknowledged for the first time that cutting-edge Su-35 fighters, imported from Russia, had taken part in patrols.

The country's DF-41 intercontinental ballistic missile, with a range that puts the U.S. mainland in reach, is expected to be deployed this year. The rocket is capable of carrying multiple warheads, making it difficult to intercept, according to military experts.

Li said in his speech that China must continue on its path to greater military strength to safeguard national interests. Maintaining access to crucial sea lanes carrying resources and food is an economic and a defense imperative for the world's No. 2 economy.