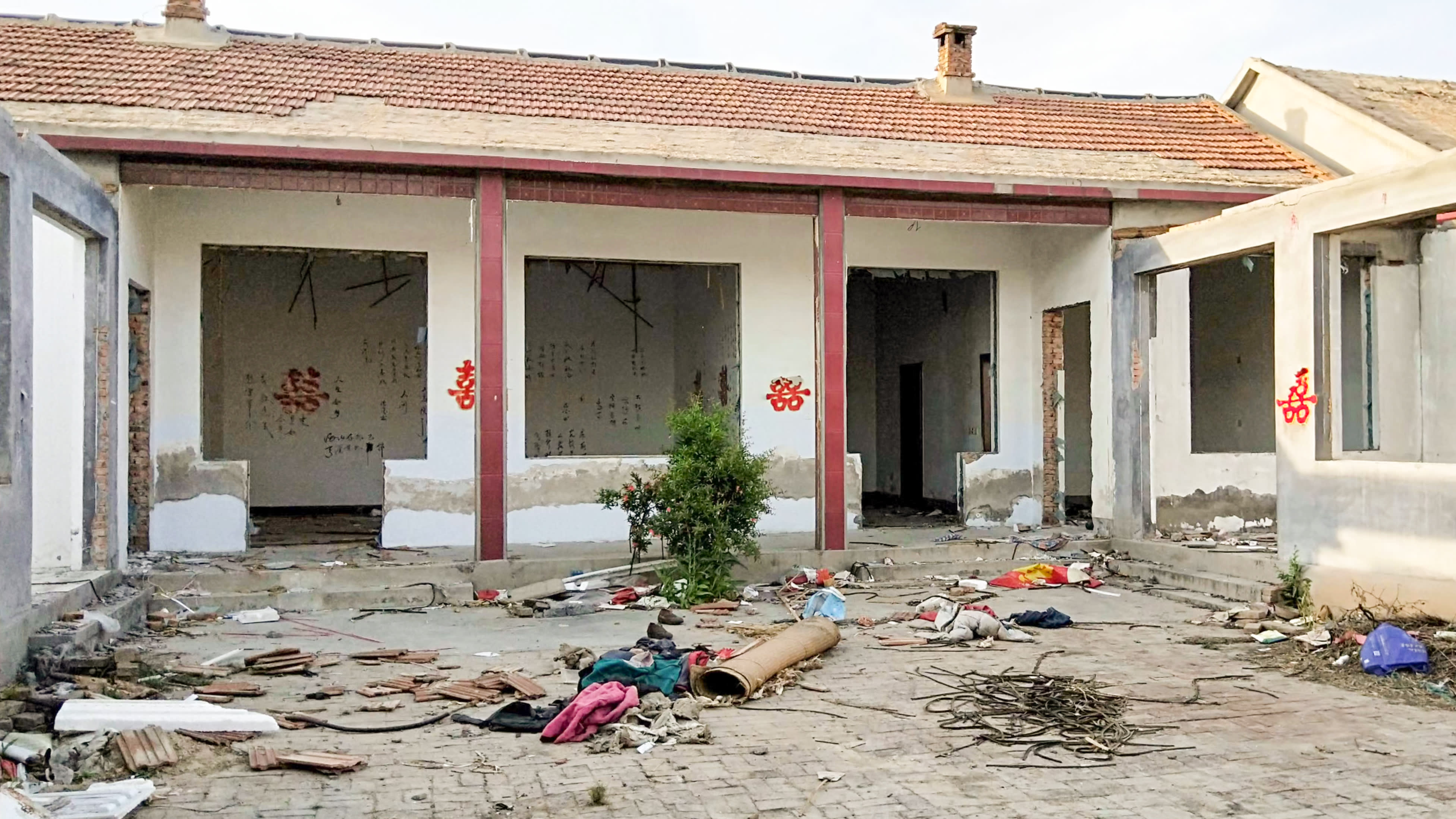 HONG KONG -- Xiao Zhao had a peaceful existence in the village of Zhaibocun in the Binzhou district of Shandong province, driving 20 minutes each day to work in a factory while his parents grew crops in nearby fields. The 30-year-old lived with his wife, daughter and parents in a large self-built cottage guarded by a dog that often barked at neighboring chickens.

But about a month ago everything changed. The cottage was demolished and he and other villagers deserted the place where generations of their ancestors had lived.

"We had no choice but to leave," Xiao Zhao said.

Xiao Zhao's village was being relocated as part of President Xi Jinping's plan to revitalize the countryside with a goal of modernizing agriculture and alleviating poverty. But the practice in Shandong has been controversial. Local officials ordered people in villages deemed "not worth retaining" to be relocated to apartments in larger community units. A 2018 government document says the province's "rural revitalization" strategy involves relocating and merging 20% of its close to 70,000 villages.

Numerous villagers told the Nikkei Asian Review that they were forced to sign agreements to move and were promised new houses that have not been built. A larger number had to rent homes or stay with relatives. In many cases, they received meager compensation -- just enough to pay for much smaller unfurnished community houses.

Now living in a rented cottage in a nearby village, Xiao Zhao asks many questions.

"Where should we put our farming tools? What should we do with our animals? How could my parents go to their farmland that is miles away? How are we going to pay the expensive property management fee, electricity and gas bills?"

For China's seven hundred million rural residents like Xiao Zhao, the land where they build houses and grow crops has long been a source of security.

In the largely self-sufficient rural economy, villagers manage to support families of multiple children despite earning just one third that of urban residents. While more younger villagers have gone to the cities for better-paid jobs, they can return to their old homes when work dries up during economic downturns.

That's why Xiao Zhao, and the majority of his fellow villagers did not agree to move. They wrote a petition to the town government, but in return received threats and intimidation. "[Government people] would come to our houses and stay until late night. There were police cars driving around the villages during that time," he said. In Dongying, another Shandong district, Zhang Li had a similar experience.

A day after the 23-year-old's family refused to sign the agreement, her mother was suspended from her job as a government cleaner, Zhang told Nikkei. Officials also said that her relatives' government job opportunities could be hurt if they did not sign.

"They told us that relocation is a general political trend and we have to follow the trend," Zhang said. This is despite many houses in her village being recently built under Xi's campaign to create a beautiful countryside.

"We were scared and could not resist any longer," she said. Her family finally signed the agreement and moved to her uncle's house after selling all their harvested crops and giving away fruit trees planted in their yard.

The widespread discontent among Shandong farmers has caught the attention of the leadership in Beijing. An article published by Communist Party mouthpiece People's Daily last week slammed the practices of some local officials as "stupid," "bureaucratic," "formalistic" and ignoring the people's feelings.

The next day, the party boss of Shandong province immediately announced the suspension of projects that created huge opposition and review ones yet to be launched. But he insisted the direction for the province's rural development strategy is "correct."

A week later, several officials in Xiao Zhao's neighboring county were punished for poor work performance in carrying out the centralized living project and a town chief was dismissed, according to a statement from the municipal commission for discipline inspection.

Despite the sensitivity of moving farmers away from their villages, analysts say many heavily indebted local governments are tempted to go down the same path.

China has a rigid land allocation system, in which only a fixed amount of land can be used for construction. The aim is to maintain a minimum of 120 million hectares (1.2 million sq. km) of arable farmland to ensure food security.

However, the nation's new land management law that took effect in January allows local governments to trade their unused construction land quota with other regions. By turning the sites of low-rise village houses into farmland and moving farmers to storied buildings that occupy less space, local officials can free up more of their quota for trading.

That is tempting at a time when they are bracing to receive less tax revenue due to the coronavirus pandemic triggered economic slowdown. But a combination of a nationwide land policy relaxation and slowing economic activities means the supply of quota land for construction could exceed demand.

"Many governments might not be able to sell the quota and end up accumulating more debt if they were to place the villagers [in good apartments and compensate them well," she said. 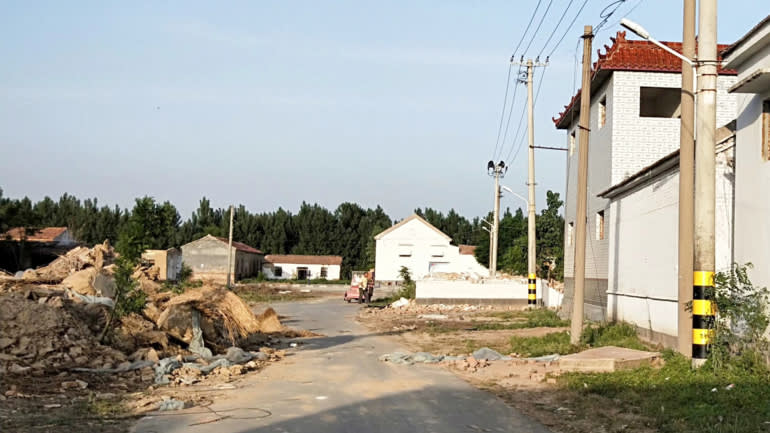 A demolished building on a street in a village in the Binzhou district of Shangdong province, China. (Photo by Xiao Zhao)

But even if the villagers manage to afford a flat, it could just be the beginning of a series of problems for farmers.

"People should not live there. There is no job opportunity," Rozelle said. Instead of moving rural residents to places in the cities -- forbidden by China's hukou, or household registration system -- the planned flats will still be in rural areas, he said. And the residents still lack skills for urban jobs despite living in modern flats -- which is not a natural urbanization process, he added.

Rozelle drew a comparison with the struggle of a public housing estate in South Central Los Angeles. With the help of the government, many unskilled people moved into the newly developed area despite struggling to find a job. Fifty years on, the ambitious ones have moved out and the poor ones become poorer, with the housing estate turning into a slum with a high crime rate.

"The community buildings in rural China are gonna be just like that... 20 years from now," Rozelle said. "The capable people will move to the cities, the poor people stay and then there will be social disorder and crimes."

While local authorities in Shandong have suspended the controversial project, for villagers like Xiao Zhao and Zhang the demolition of their old houses is irreversible.

Still, they are reluctantly moving on with their lives. Zhang said she will try her best to make money to buy a flat in a more prosperous county. Xiao Zhao has decided to settle down in the government allocated flat when it's ready, maybe a year from now. The father of a five-year-old consoles himself by saying: "I'll try my best to put my kid in a good school in the city.

On the day he left the village where he was born, Xiao Zhao posted a photo of himself on social media in front of a giant stone engraved with the village name.

The caption says: "Why are my eyes always brimming with tears? Because I love this land so deeply." The lines were taken from a famous modern poem written by Ai Qing, the late father of exiled Chinese artist Ai Weiwei.