Workers leave a construction site at the end of their shift in Beijing. The construction industry, which employs large numbers of migrant workers, is among sectors that have seen more labor disputes recently.   © Reuters
YUSHO CHO, Nikkei staff writerMay 3, 2020 11:08 JST | China
CopyCopied

SHANGHAI -- Laborers from Qiantu Motor sat patiently in the company's lobby, waiting from one of the executives to walk through on the way to their office.

When they spotted an executive from the four-year-old electric vehicle maker, the workers would shout, asking when they would get the wages that were owed to them.

The group "came to the company's front lobby almost every day, sitting there with their futons and demanding pay whenever a senior executive walked by," said a guard at the company's Suzhou head office.

Scenes like this are becoming more common in China as workers in industries from automobile manufacturers to shipping and retail have reached a boiling point over unpaid wages and layoffs due to an economy that has been stunted by the coronavirus outbreak.

The disputes look set to continue at least in the near term. Any major economic stimulus from the central government has been held up as the opening of the National People's Congress, the country's legislative session, has been pushed back to May 22. 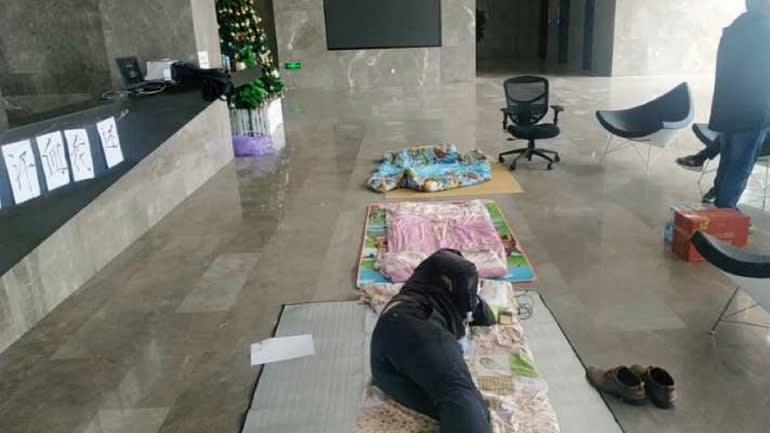 At electric vehicle manafacturer Qiantu Motor in Suzhou, workers camped out in front of the reception desk to protest unpaid wages.

Qiantu showed signs of deteriorating finances last year, when it first had trouble making payroll. The coronavirus outbreak was the last straw, and the company effectively suspended operations. Its parent is said to be seeking roughly 7 billion yuan ($991 million) in financing, but whether the deal will come through remains uncertain.

Chinese workers have launched more than 70 labor disputes since March, according to a tally by Hong Kong-based nongovernment organization China Labor Bulletin. Labor unrest was quiet in February, when many parts of the country were shut down.

But the country has come out of lockdown and its workforce is growing frustrated. Data from China Labor Bulletin shows workers in different industries are protesting. Until last year, disputes were mostly limited to construction, restaurant and other industries that serve domestic demand and employ migrant workers. This year, it is clear that workers in a wider range of industries are taking a beating from falling demand in overseas markets amid the pandemic. Textile wholesalers recently demonstrated at a market in Guangzhou to demand a break on rent.

GNDC, a Taiwanese contract manufacturer with a location in Shanghai, had been cutting part-time jobs due to declining smartphone orders overseas, while slashing overtime for full-time staff, leaving some workers with less than $425 a month in take-home pay. Laid-off workers congregated outside its head office April 20.

Even industries that had been going strong until recently are taking a hit. Zotye Automobile, a mid-size player in Zhejiang Province, fell into arrears with wages and its workers took to the matter to court.

The southern coastal province of Guangdong -- an industrial hub -- logged double-digit labor disputes, while disputes have been recorded in inland provinces of Sichuan and Henan as well as Shandong on the northern coast.

While the legislature is expected to approve a budget for rebuilding the coronavirus-ravaged economy at the congress on May 22, some time will likely be needed before spending is carried out. Financing and other forms of assistance are now offered, but many small business owners and migrant workers may not receive any relief.

The increase in labor disputes comes as business owners run into serious financial challenges. In a February survey by Tsinghua University and Peking University, 85% of some 1,000 small and mid-size businesses said they would run out of cash in one to three months.