Ships in the Strait of Singapore (Photo by Ken Kobayashi)
Economy

Rival RCEP deal also up for discussion in Asian meetings

TOKYO -- For seven days spanning this week and next, leaders and ministers from Asia and the Pacific region will gather in Danang, Vietnam, then in Manila, for meetings of the Asia-Pacific Economic Cooperation and the Association of Southeast Asian Nations. But the focus will be on what happens on the sidelines of both events, where the future direction of global trade may very well be decided.

Back from the dead

In the wings of the APEC meetings in Vietnam, ministers from the 11 remaining nations in the Trans-Pacific Partnership will look to reach a broad agreement on the trade pact.

The deal is back from the ashes: the initial TPP deal was agreed in early 2016 by 12 members including the U.S., but was thrown into uncertainty when President Donald Trump decided to pull the world's biggest economy out of the pact.

While it is true that without the U.S., the economic impact of the agreement will be much smaller -- the so-called "TPP 11" only makes up 13.5% of the world's gross domestic product and 15.2% of global trade volumes, as opposed to 38.2% and 26.5% with the U.S. -- the 11 nations remaining saw good reason to keep the spirit of free trade alive and have spent months scrambling to save the deal. Because the U.S. secured numerous concessions during its negotiations, the remaining countries have been busy hashing out which terms from the original pact to suspend now that Washington has left the table. There were initially around 70 such requests, but after months of negotiations by working-level officials, that list has significantly been narrowed down.

TPP ministers from the 11 nations have started further talks on the issue in Danang to decide whether to rubber stamp the deal.

After the TPP talks, center stage for trade negotiations will move to ASEAN and East Asia summits in Manila, where nations participating in the Regional Comprehensive Economic Partnership, or RCEP, will hold talks. The initial plan was to reach an agreement on the creation of a free trade zone among 16 countries in the Asia-Pacific region by the end of 2015. But two years on and talks have so far borne no fruit.

The 16 RCEP nations held their 20th meeting in South Korea in mid-October to pave the way for a potential agreement in Manila, but they are finding it difficult to reach common ground.

"It is not likely that we will reach an agreement on the deal within this year," said a senior official attending the meeting who asked not to be named. "We are trying to narrow differences, but the process is not easy. In particular, it is hard to agree on the level of openness in each market." Negotiations in Manila are expected to yield few results, but pro-trade experts are hoping for the TPP talks to have positive knock-on effects on the RCEP.

The key differences between the TPP and RCEP trade pacts (other than their member nations) is their scope, as well as their standards. In its initial form, TPP was touted as a "trade deal for the 21st century", seeking to remove tariffs on more than 99% of items traded among member nations by unifying rules across a range of areas. TPP was also lauded for including worker protection and environmental conservation in its scope, unlike previous free trade agreements.

RCEP on the other hand is less ambitious and has a narrower scope, with ASEAN nations more focused on signing off the deal than chasing bigger economic gains. It is more flexible than the TPP, taking into account the differences in economic development of its members. Countries like Japan and Australia are calling for RCEP to have similar high standards to the TPP, such as on labor and environmental protection, while countries like India and China are growing weary of such deals. The hope for those seeking higher standards for RCEP is that if TPP talks can be concluded in Vietnam, that might pressure the reluctant members of RCEP to agree to more TPP-like standards.

This will all fall apart, however, if TPP 11 is watered down to the extent that it does not live up to its billing as a trade deal for the 21st century. Remaining bones of contention are believed to include investor-state dispute settlement provisions -- which would allow foreign investors to take action against a TPP country perceived to have breached investment rules -- along with labor and environmental issues. Jacinda Ardern, New Zealand's new prime minister, has said that her government would "do [its] utmost" to amend the ISDS provisions, while Vietnam and other countries that have yet to refine their laws on labor and environmental matters appear wary of the current TPP rules. Suspending too many terms, including these, would run counter to the spirit of the pact.

"The whole goal of the TPP was to set high standards for the region," Michael Froman, who led Washington's TPP negotiations under former President Barack Obama before the country's withdrawal, said in a recent interview with the Nikkei Asian Review. "And so to reopen, renegotiate and weaken the standards undermines one of the main purposes."

Another challenge for the TPP 11 is that only Japan and New Zealand have ratified the deal domestically, meaning that even after all 11 countries do agree on the deal, domestic pressures could delay its implementation.

But regardless, the upshot is that if this wide range of countries can agree on a free and fair multilateral trade deal in an age where protectionism is seemingly on the rise and where the U.S. is favoring bilateral deals, they could set the tone for the future of trade negotiations.

"If we are able to reach a deal, not only would we have a multilateral free trade bloc in the Pacific rim, but it will send out a very strong message to the world," Kazuyoshi Umemoto, Japan's lead TPP negotiator, said after talks between negotiators in Urayasu, Japan in early November. "We are working on the assumption that this deal can have a huge impact on the global economic system." 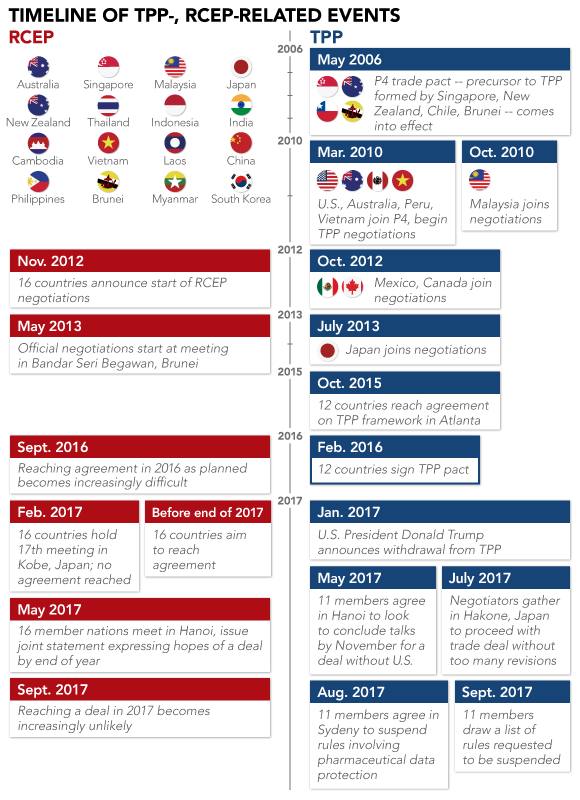