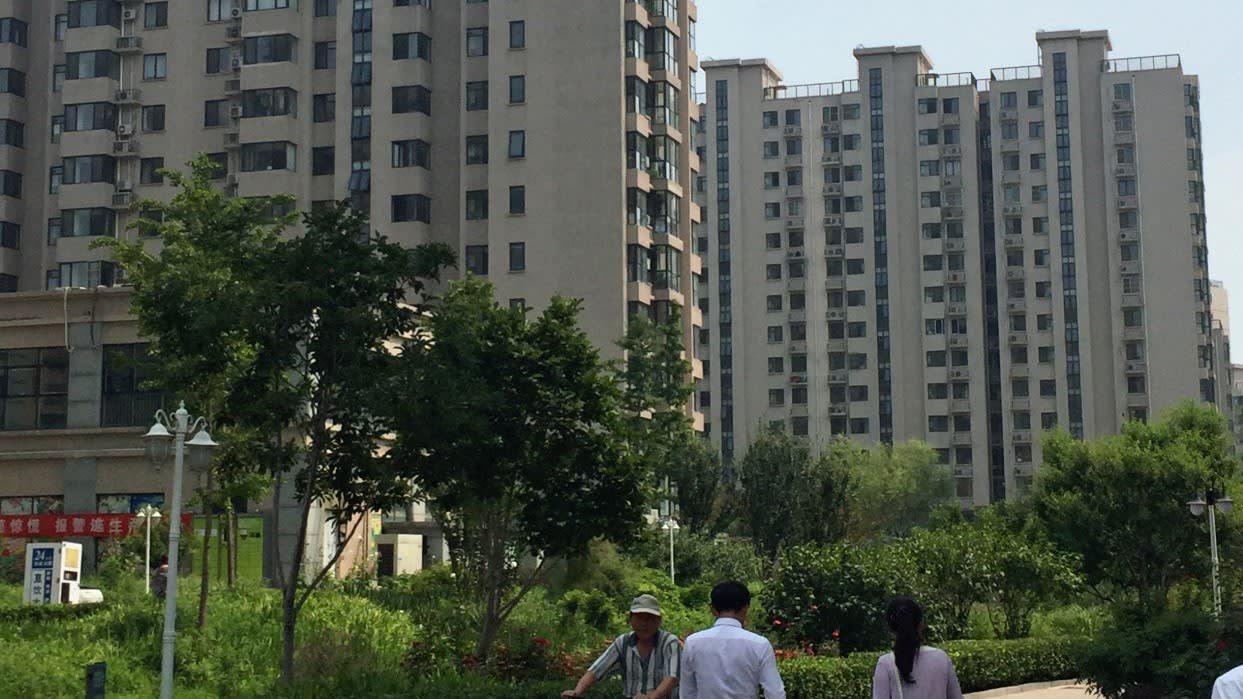 BEIJING -- China's frenzied real estate market eased in the January-July period as monetary tightening and other market-cooling measures set in, with the effects becoming widespread to blunt growth in the larger economy.

The impact of the government policy is most palpable in the capital city. The Beijing government tightened its real estate purchasing limits starting in March. Those who have taken out even one home loan before must now pony up a 60-80% down payment for a mortgage that is seen as going toward buying a second home. Now real estate sales in the metropolis have plunged by as much as 40% on the year.

One Beijing-area resident recently recounted buying two cars' worth of parking space to rent out. The company employee has two apartments in the city already, but turned to investing in parking spaces because city regulations forbid buying any more homes, and prices are too high to make a move.

Nationwide, real estate sales grew 14% on the year for January-July in floor space terms, according to figures released Monday by the National Bureau of Statistics. Unlike slumping Beijing and Shanghai, smaller cities are encouraging sales in order to reduce stockpiles, keeping sales in China overall growing year on year. Yet the growth rate for the period was the lowest since the calendar year 2015. Sales grew just 2% for July on a monthly basis. Measures aimed at defusing the bubble -- such as bigger cities placing buying limits, home loan regulations and loan rate hikes -- continued to have an impact.

Official statistics pin real estate's proportion of gross domestic product at 6%. But "factoring in effects on investment and consumption, it climbs to about 20%," says one government-affiliated economist.

Investment in developing such properties as apartments and offices, for example, grew 7.9% for January-July, 0.6 percentage points slower than January-June, holding back investment overall. Year-on-year growth of total retail sales of consumer goods in July also shrank by 0.6 percentage points from the month before. One causal factor was slow growth for furniture, appliances and building and interior decorating materials that accompany home purchases.

Monday's data also showed that industrial manufacturing grew 6.4%, 1.2 percentage points less than in June. Production flagged for goods including automobiles and cell phones, for which domestic sales dropped sharply in the first half. The statistics bureau offered the unconvincing explanation that "adverse weather" was to blame for the slowdown, reasoning used last July as well.

On the other hand, crude steel output grew 10.3% to 74.02 million tons in July, a new record on a monthly basis. This was because prices of the metal have risen amid healthy infrastructure spending and a crackdown on illegal steel materials production.

China's exports had been recovering at a brisk pace but grew just 7.2% in July on a dollar basis, a major deceleration. Beijing's upward steering of the yuan this year may have held back export growth. Signs of trade friction with Washington have also been cause for concern.

Beijing's tilt toward monetary tightening appears likely to percolate out beyond real estate and cause wider slowdowns in the economy in the second half.

The Office of the Central Leading Group for Financial and Economic Affairs, a Communist Party organ that decides macroeconomic policy, intends to continue with moderate monetary policy even if interest rate increases show effects in the second half, said an official.

A statistics bureau spokesman, Mao Shengyong, told reporters Monday that it would be normal for GDP growth to slow by 0.1-0.2 percentage points in the second half. "China should not only pursue a larger economic size, but also strive to build muscles to make the economy more robust," Mao said, suggesting structural reform will be a priority.