Cooperation is order of the day at Northeast Asia forum 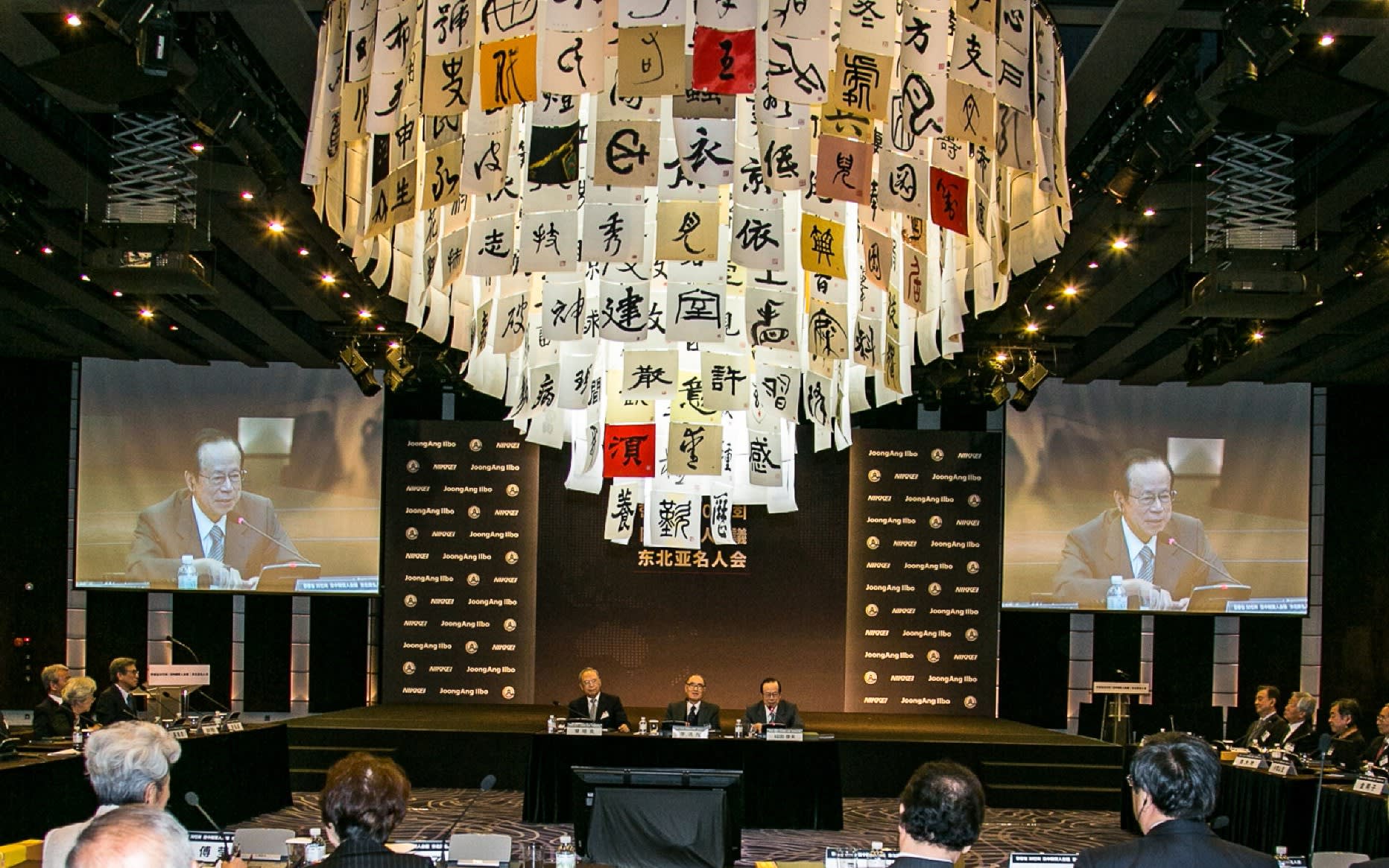 Pieces of paper bearing Chinese characters that are meaningful to Japanese, Koreans and Chinese alike hang from the ceiling of the conference hall. (Photo by Kentaro Ogura)

SEOUL Economic integration and cooperative infrastructure development are the way forward for Northeast Asia, delegates from Japan, South Korea and China agreed at a recent symposium.

The three ex-leaders delivered keynote speeches. In-depth discussion sessions were also held on three themes: economics and finance; energy and the environment; and culture and education.

BANDING TOGETHER   Zeng in his speech called for "the quick conclusion of a trilateral free trade agreement to tighten economic ties and lay the groundwork for economic integration in Northeast Asia." Such a pact would drive regional growth, delegates said.

The Chinese delegation voiced hopes that the TPP would be one of "two organically developing economic blocs" in Northeast Asia, "alongside the Regional Comprehensive Economic Partnership." China has taken a leading role in the RCEP negotiations, which include Japan and South Korea along with 13 other nations.

Integration efforts, Zeng said, would take the form of three "networks" and three "pathways." Specifically, he said advanced transportation, communications and energy networks are the ultimate goals for joint development. Shared regulatory, logistics and financial pathways, meanwhile, would create a conducive environment for those projects.

Zeng assured delegates that the "One Belt, One Road" initiative will in fact let the networks and pathways framework "stretch to cover the globe." Chinese experts also defended the Asian Infrastructure Investment Bank, emphasizing that its goal is to complement rather than upend the current order in international finance.

Proposals for stronger monetary and industrial cooperation emerged as well. A number of delegates argued for a trilateral currency swap arrangement between the countries' central banks. Others called on China to use the yuan's scheduled inclusion in Special Drawing Rights, the International Monetary Fund's reserve asset, as an opportunity to make more thorough financial reforms.

South Korean delegates proposed that the three countries spearhead the creation of technological standards for networked devices, automobile production and other industries.

Chinese delegates, throwing their support behind such efforts, stressed that cooperating on infrastructure and creating shared fuel stores would help reduce national security risks and bring down fuel costs.

An art installation in the conference hall underscored that spirit of unity. A set of 808 Chinese characters meaningful to all were written on pieces of paper and hung from the ceiling, representing mutual understanding. South Korean newspaper JoongAng Ilbo, one of the organizers of the event, gave out leaflets detailing the glyphs' nuances in Japanese, Chinese and Korean.