The Philippine economy has fallen into its first contraction since the fourth quarter of 1998, which came a year after the Asian financial crisis and during an El Nino drought.   © Reuters
CLIFF VENZON, Nikkei staff writerMay 7, 2020 11:26 JSTUpdated on May 7, 2020 14:49 JST | Philippines
CopyCopied

MANILA -- The Philippine economy contracted 0.2% in the first quarter through March as travel restrictions and lockdowns crippled business activity and household consumption.

This is the first contraction in the country's real gross domestic product since the fourth quarter of 1998, which came a year after the Asian financial crisis and during an El Nino drought. But Philippine officials say the worst is yet to hit and that the economy could contract in the next two quarters.

A Reuters poll of economists predicted 3.1% first-quarter growth for the country, which was among the fastest-growing in the region before the pandemic.

Acting Socioeconomic Planning Secretary Karl Chua attributed the worse than expected performance to the Taal volcano eruption in January that affected tourism and domestic supply chains, the COVID-19 pandemic and the resultant lockdown.

"Containing the spread of the virus and saving hundreds of thousands of lives through the imposition of the ECQ [enhanced community quarantine] has come at great cost to the Philippine economy," Chua said during an online news conference. 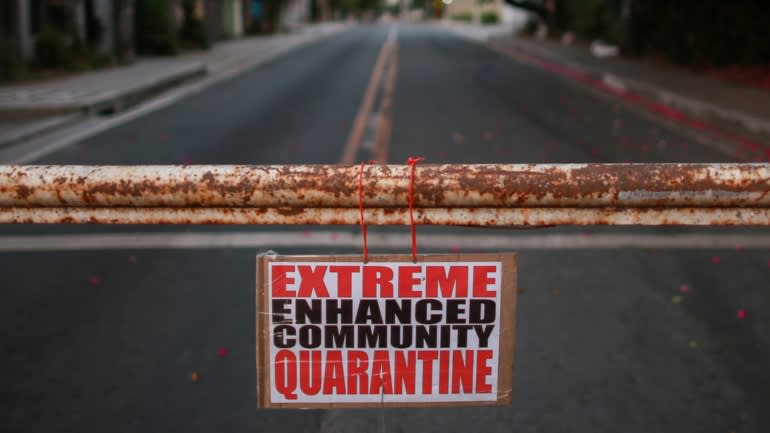 The Philippine economy is suffering from the effects of lockdowns and travel bans as a result of the coronavirus outbreak.    © Reuters

Household consumption, which is the engine of growth, barely grew by 0.2% in the first quarter on the back of restrictions imposed to prevent the spread of the new coronavirus.

President Rodrigo Duterte imposed travel curbs in late January, before placing the main Luzon island on lockdown in mid-March. Luzon, home to 57 million people, contributes over 70% to the economy. Travel bans also hit the tourism industry, which forms around 10% of the economy.

The government is weighing whether to ease the lockdown by May 15. Still, Chua said, "the second quarter might be worse."

Nicholas Mapa, senior economist at the Manila branch of ING Bank, said the economy is on course for a technical recession.

"The Philippines will likely post a technical recession in 2020," he said. "First-quarter GDP showcases how detrimental the lockdown can be for the economy."

Monetary and fiscal authorities have programmed an aggressive stimulus package worth around 1.4 trillion pesos, equivalent to over 7% of the economy.

On April 25, Philippine central bank Gov. Benjamin Diokno said the country is likely to see a U-shaped economic recovery by the fourth quarter of this year.

As of Wednesday, the country had over 10,000 coronavirus infections and more than 600 deaths.