A woman puts on a protective mask at Sudirman Station in Jakarta on Tuesday. The coronavirus is expected to hit the economies of Indonesia and its Southeast Asian peers in 2020.   © Reuters
SHOTARO TANI, Nikkei staff writerFebruary 5, 2020 13:38 JSTUpdated on February 5, 2020 15:10 JST | Indonesia
CopyCopied

The archipelago's real gross domestic product rose 5.02% last year, down from 5.17% in 2018 and short of the government's 5.3% target, according to data from Badan Pusat Statistik, Indonesia's statistics agency, released on Wednesday.

Singapore and the Philippines both recorded their slowest GDP growth rate in ten and eight years, respectively, amid the U.S.-China trade tensions. The figures paint a challenging outlook for economic recovery in a region that now has to contend with the coronavirus outbreak.

The lower annual growth came despite the economy being cut off from the global supply chain and shielded from trade war shocks. The central bank slashing its key interest rate by a total of 100 basis points also did not provide the impetus for the nation to meet its growth target.

The dwindling purchasing power is reflected in a drop in auto sales of 10.5% last year -- barely meeting the industry association's target of one million unit sales.

Investors failed to return to Southeast Asia's biggest economy despite political uncertainties dissipating after President Joko Widodo was reelected in April. Investment into the country dropped 3.4% to $28.2 billion last year, a second straight annual decrease, according to data from the Investment Coordinating Board.

Indonesia's economy grew 4.97% in the three months ended December from a year earlier -- the first time it fell under 5% since the final quarter of 2016. 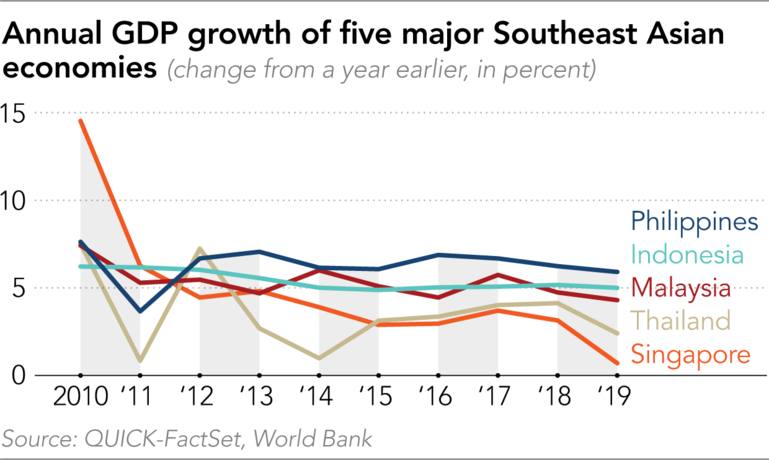 A lukewarm economy may force Widodo to accelerate his push to implement unpopular reforms such as changes to the country's rigid labor market. But any hope of a swift upturn has been dented by the spread of the new coronavirus.

Although Indonesia has yet to record a single case, weaker demand in China may further damage its export sector and consumer sentiment. Popular destinations for Chinese tourists such as Bali are being hit by cancellations.

"We need to hope this problem will be resolved," said Sri Soelistyowati, deputy for statistic analysis at the bureau, adding that the agency cannot yet fully calculate the potential impact from the outbreak.

Helmi Arman, economist at Citi Indonesia, said "the impact of the novel coronavirus today to the macroeconomy could be potentially larger versus the impact of previous virus outbreaks in 2003 and 2006."

"The potential decline in global commodity prices could lead to a scenario of a further decline of Indonesia's exports in 2020," he said. "We think the changes in the commodity export outlook may well be the wild card that will impact the growth trajectory the most."

Other Southeast Asian countries are also bracing for a challenging 2020.

Already reeling from a slowing economy exacerbated by a strong currency, Thailand's Finance Ministry in January lowered its GDP growth outlook for this year to 2.8% from 3.3% on the coronavirus's impact on tourism.

Economists at OCBC Bank said in a note that Singapore's forecast of 1% to 2% year-on-year GDP growth for 2020 "could see downside risks if the duration and severity of the outbreak worsens further."

Using the experience of the SARS outbreak back in 2003, they estimate that Singapore's GDP growth "could potentially be shaved off by up to 0.5% to 1% point from the baseline if the current epidemic lasts more than 3-6 months and constrains business and consumer confidence, restricts travel, and impacts productivity."