TOKYO -- The global economy is doing well overall, with the International Monetary Fund forecasting 3.5% growth in 2017, up from last year's 3.2%. But worries are emerging about the two locomotives of world economic growth -- the U.S. and China.

Advanced economies are holding steady, while emerging economies are projected to mark the highest growth in three years. Propped up by overseas demand, exports from Japan increased on a quarter-to-quarter basis for the third consecutive quarter through the January-March period of 2017.

But new car sales in the U.S. in the first six months of 2017 incurred their first year-on-year decline in eight years.

Execution of new auto loans by major U.S. bank Wells Fargo shrank 45% in the April-June quarter from a year earlier. CEO Timothy Sloan said lending will continue to decrease in the second half of this year.

Auto sales are slowing in the U.S. due to slackening demand and tougher screening of loan applications by lenders as defaults increase among low-income borrowers.

The U.S. economy grew a real 2.6% in the April-June quarter at an annual rate, up from 1.2% in the previous quarter when economic activity was adversely affected by bad weather. But wage growth is sluggish. It neared 3% at the end of last year, signaling the possibility of recovery, but has fallen back to the mid-2% level since the start of the year. Domestic demand fails to significantly contribute to wage growth at full employment. 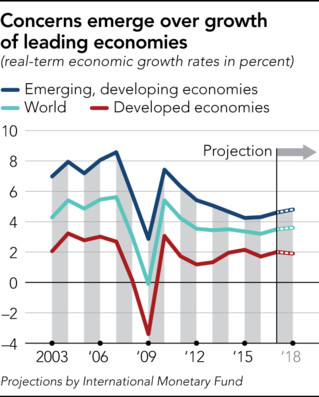 Tad Rivelle of TCW Group, a leading American asset management company, warned against the outlook for consumption in the U.S., noting that higher rents and increasing medical bills are reducing disposable income.

China is also worrying. Although the nation's gross domestic product expanded a real 6.9% in the April-June period from a year earlier, the high growth was due in part to infrastructure investments before the Communist Party of China's national congress in autumn this year.

A project to lay two new subways by 2020 at a cost of 48 billion yuan ($7.15 billion) is underway in Kunming, Yunnan Province. The project is a public-private partnership.

P3 projects, which utilize private-sector funds, totaled 14.6 trillion yuan as of the end of March, including those in the planning stages. This represents an increase of 70% in a year.

"I wonder if the boom will continue after the party congress," a steelmaker executive said.

Analysts note that overheated investments and unnecessary construction projects are causing lingering concerns that the economy could change course after the end of the year.

The Baltic Dry Index, which tracks shipping prices and is regarded as a leading indicator of the world economy, has fallen 30% from its high in March. The index is "somewhat weaker than expected," said Tadaaki Naito, president of major Japanese shipping company Nippon Yusen.

The weaker index partly reflects declines in the price of iron ore imported by China. "We cannot brush aside concerns that shipping prices will buckle due to the cooling of the Chinese economy," a maritime transport broker said.

Another concern is that major economies are moving toward "normalization" of monetary policy. Since the end of June, central bank chiefs in the eurozone and Britain have begun talk of tapering easy-money policies while the Bank of Canada recently raised its benchmark interest rate.

The U.S. Federal Reserve intends to reduce its assets, though it will avoid increasing rates too fast.

While benefiting from the glut of easy money, Wall Street is keeping a close watch on moves by the world's central banks. Although attempts at normalizing monetary policy mean the global economy is beginning to stabilize, imprudent actions could dampen economic activity.

Policy preparedness by governments to achieve stable economic growth without monetary easing, which has served to calm economic jitters, is hardly assuring.

U.S. President Donald Trump may be unable to raise the federal debt ceiling to meet funding needs by October, as he has been bogged down dealing with the nation's health care issue.

In addition, the U.S. and China failed to iron out differences at their inaugural Comprehensive Economic Dialogue held recently. This poses risk to the world economy, which could be disrupted by trade friction between the two countries that are expected to drive its growth.