BANGKOK -- Knee-jerk reactions to Chinese moves in equity markets are currently grabbing headlines. But a longer-term perspective looking at the currency market shows just how deeply connected China has become with the global economy. 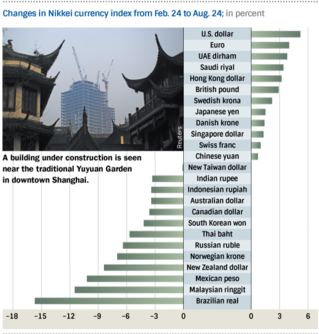 The Nikkei currency index is a trade weighted measure of exchange rates. In the six months from Feb. 24 to Aug. 24, the Brazilian real dipped 15.7%. China is the Latin American nation's biggest trading partner. In 2013, the country exported more than $46 billion in goods, or 19% of its total, to China. Raw materials, such as iron ore and corn, were its main exports. Back in 2007, the last time Shanghai shares dropped 8.8% in a day, China ranked third in exports from Brazil, taking up 6.7%. It bought less than half of what the U.S. did from Brazil that year. Today, China buys double what the U.S. does from the country, making Brazil much more vulnerable to the performance of the Northeast Asian economy.

Currency weakness can boost economies by raising exports in the short term, but it also invites inflation and instigates capital flight. This in turn can deplete liquidity and hobble growth.

Another Latin American currency, the Mexican peso, has lost over 10%. The U.S. is by far the country's largest trading partner, but China is now second in terms of import value. Hence, the devaluation of the yuan has led to Mexican anxiety about a sharp rise in imports. Steel in particular is a worry. China reportedly has 300 million tons of excess capacity of the material.

Carlos Caicedo, senior principal analyst at IHS Country Risk, wrote in an Aug. 25 note that Mexican steelmakers have already cut almost 10,000 jobs this year. "It is likely that Mexico will introduce further import restrictions on Chinese steel," he said.

New Zealand is also dependent on China. For the first time in 2013, China was the largest export market for New Zealand, overtaking Australia. Over 20% of exports now head to China, led by powdered milk, but the deceleration of the Northeast Asian nation's economy is taking a toll on the New Zealand dollar.

Japan was the top destination for Australian exports in 2007, but China now has the crown. In 2013, 36% of Australia's total exports head to China, more than double those destined for Japan.

Closer to home, the currencies of Malaysia, Thailand, South Korea and Indonesia are depreciating. These four economies have in recent years become increasingly dependent on China as their main export destination. Malaysia's ringgit is the worst-performing Asian currency this year, and has already fallen to a 17-year low versus the greenback. Economic Minister Mustapa Mohamed expressed concern about China's economic slowdown. "Of course we are affected," he told reporters on Aug. 24.