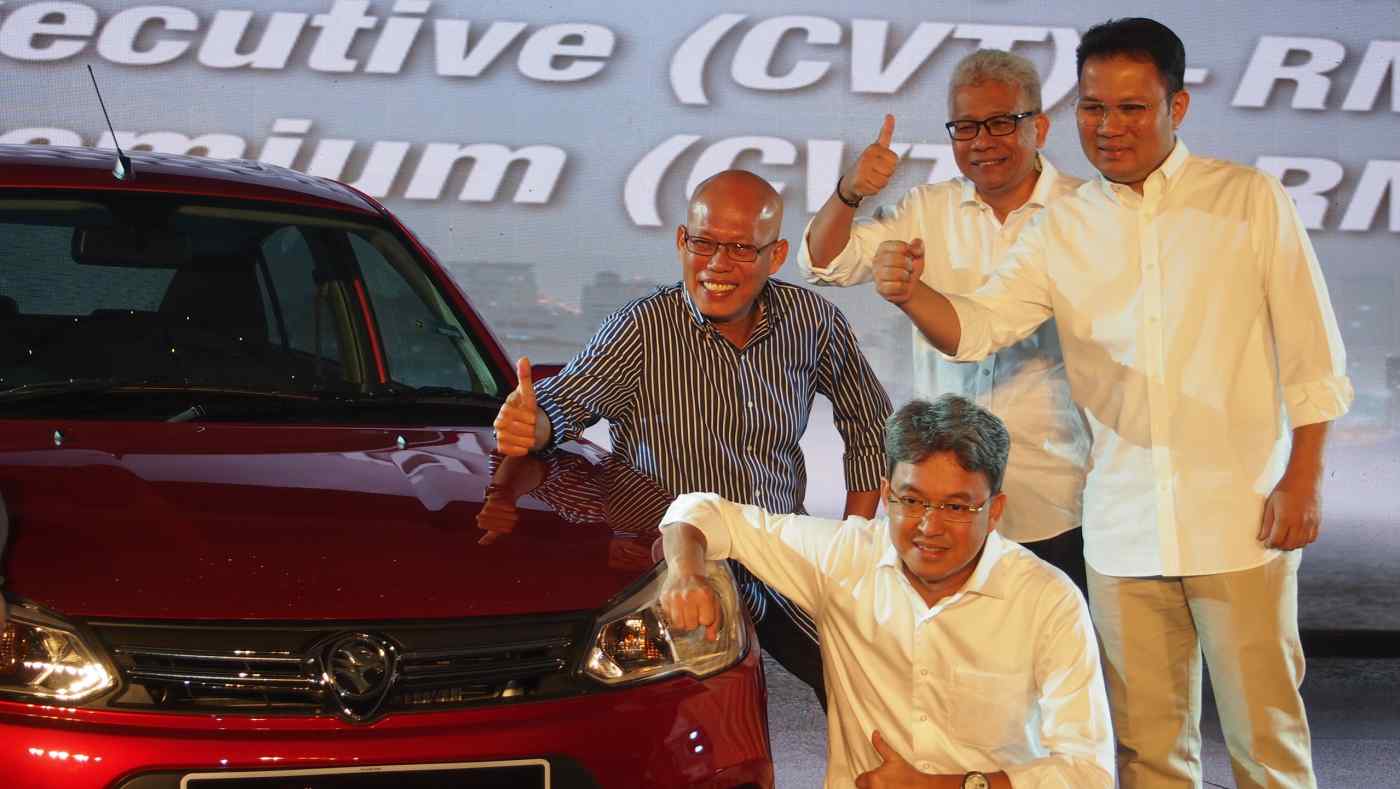 KUALA LUMPUR -- Automotive conglomerate DRB-Hicom has taken quite a beating in the four years since it reacquired Proton Holdings, Malaysia's embattled national carmaker, and is now running out of time and funds for a turnaround.

The government has thrown a lifeline with a 1.5-billion-ringgit ($362 million) soft loan that is conditional on DRB-Hicom finding a foreign partner willing to invest by March 2017 in Southeast Asia's sole indigenous automotive marque.

On Sept. 28, Syed Faisal Albar, DRB-Hicom's group managing director, told over a 1,000 guests at the launch of the latest Saga model, a 1.3-liter sedan, "Today is the turning point where the future of Proton turns in our favor." 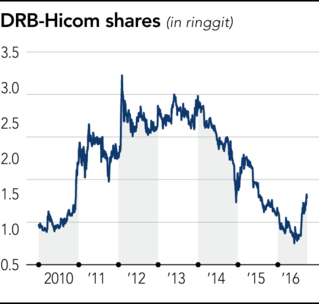 Proton's best-selling model, the Saga, is in its third incarnation and has sold over 2 million units since it was rolled out in July 1985. But the latest version comes at a time when car sales are declining and consumer confidence is depressed. The car is a new shell along with improved powertrain sitting on a second-generation platform -- evidence of Proton's inability to invest enough to innovate.

DRB-Hicom's share price has risen 45% since April and hit 1.48 ringgit ($0.36) on Sept. 29 after the government promised the loan to pay vendors. Although the stock is at its highest since November, it is still well short of the 3.17 ringgit reached in February 2012 when the acquisition of Proton was approaching completion. 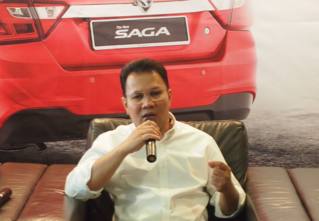 Syed Faisal Albar, DRB-Hicom's group managing director, believes Proton has a future but is reticent on the extent of future foreign ownership. (Photo by CK Tan)

DRB-Hicom posted a loss for the year ending in March, which it blamed on unfavorable foreign exchange and stricter hire purchase guidelines affecting its automotive division. The net loss of 991 million ringgit on revenue of 12.17 billion ringgit followed a net profit the previous year of 300 million ringgit.

The automotive division accounts for 77% of DRB-Hicom's revenue, of which Proton contributes 51%. Prior to the Proton acquisition, the conglomerate was relatively profitable. It has significant state contracts to assemble armored vehicles for the military and maintain police aircraft. It also has stakes in the local units of Honda Motor, Isuzu Motors, and Mitsubishi Motors. 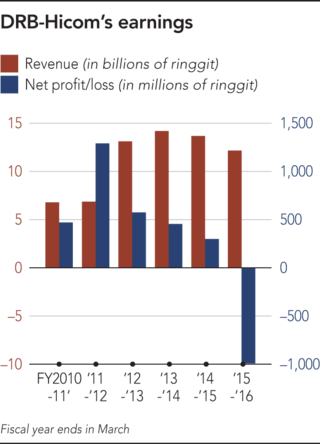 Reviving Proton is DRB-Hicom's foremost concern. With a new management team in place since April headed by Ahmad Fuaad Kenali, Proton said it is confident of improvements. The focus is on three models launched this year and cost optimization. Kenali joined DRB-Hicom in 2013 from Astro Malaysia Holdings, a pay TV company where he was chief financial officer.

DRB-Hicom started life in 1980 as the state-owned Heavy Industries Corporation of Malaysia (Hicom) with a mission to lead national industrialization and reduce economic dependence on agriculture and tin mining.

Mahathir Mohamad became prime minister in 1981, and the national car was launched two years later as a prestige project with Hicom holding 70% of Proton. The rest was held by Mitsubishi Corp. and Mitsubishi Motors, which provided technology, know-how, and key components.

The government subsidized Proton using tax breaks and research grants, and by shielding it where possible from competitors. The company was listed in 1992, and has always focused primarily on sedans for the domestic market. At its peak in 1993, seven out of every 10 cars sold in Malaysia was a Proton, but that dominance has been eroded down to a market share today of just 15%, and has fallen particularly sharply from 25% in 2012. Proton's decline in the early 1990s was partly due to another national carmaker, Perodua, which was created in 1993 as a joint venture with Daihatsu Motor and Mitsui & Co. to produce compact cars. Liberalization in the ASEAN Free Trade Area also made cars imported from within the region more affordable.

There have been three major attempts to reverse Proton's decline. On the rebound from the Asian financial crisis in 1997, Hicom, the 70% shareholder,   was merged in 2000 with Diversified Resources Berhad (DRB), Malaysia's motorcycle and truck assembler.

At that time, state oil company Petronas and later sovereign fund Khazanah Nasional took controlling stakes in Proton to lighten DRB-Hicom's burden. DRB-Hicom was freed to focus on assembly of Mercedes-Benz, Volkswagen, and Mitsubishi Fuso vehicles for local distribution. But even with the financial clout of Petronas and Khazanah, Proton failed to regain steam.

In 2012, Khazanah offloaded its 42.7% for 1.3 billion ringgit back to DRB-Hicom, which since 2005 had been controlled by a local businessman, Syed Mokhtar Albukhary. DRB-Hicom promised to "steer Proton into the future", and to strengthen the conglomerate's presence globally, but none of this transpired.

Mokhtar was one of the ethnic Malay entrepreneurs trusted to lead strategic companies under the Mahathir government's privatization drive. Sime Darby, a state-linked plantation company, had also put in a bid for Khazanah's Proton stake. But Mokhtar came out the winner after Mahathir, who by that time had stepped down as prime minister, openly supported DRB-Hicom's bid.

"DRB-Hicom is quite well run," Mahathir said in an interview at the time. "This company also belongs to the AlBukhary Group, which has a lot of other businesses, including port operations. They seem to be able to do business."

As these domestic maneuvers failed, the government continued to look for options. In April, it declared the existing Proton business model "not sustainable" and told DRB-Hicom to find a "strategic foreign partner" before early 2017. 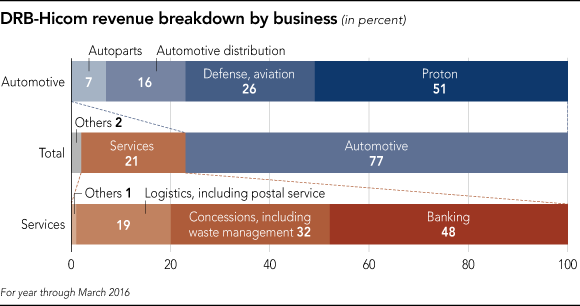 Mitsubishi Corp exited in 2005 after Petronas and Khazanah stepped in. Proton found itself unable to improve products and after-sales service, and the government concluded that a global automaker would have to become involved. There have been reports of Germany's Volkswagen, Japan's Suzuki Motor Corp., and France's Renault all being interested, but DRB-Hicom has confirmed nothing beyond saying that five foreign companies have expressed interest. Reports that Geely Automobile Holdings might be among those interested were rebutted by the Chinese company at a press conference in August. On Sept. 28, Albar told reporters that Proton was looking for a partner with a regional sales network, suggesting that exports are intended to play a role in the recovery strategy.

While analysts agree that Proton must tap foreign capital and engineering, CIMB Research sees a serious downside risk if cash-strapped DRB-Hicom fails to forge a new partnership. DRB-Hicom's cash and short-term funds were already down to 1 billion ringgit in March 2016 compared to 6.4 billion ringgit five years earlier before the Proton reacquisition.

There is also no guarantee it can retain profitable government concessions in its other operations, many of which date from a time when Mahathir still wielded influence. Mahathir resigned as Proton's chairman in March after falling out badly with Prime Minister Najib Razak and his government.

After stepping down as prime minister, Mahathir stayed on as an adviser to Proton and assumed the chairmanship two years ago with hopes of gaining more state support. "Mahathir's era of political interference has come to an end," the prime minister declared when his predecessor resigned from Proton. "At times," Najib said, "there was a sense of hubris that Proton could do anything because the government would always back it."

Mahathir's departure could make the issue of foreign ownership less sensitive. Serious talks with Volkswagen failed in 2007 when it emerged that the German carmaker expected to have a substantial stake. Mahathir advised against that at the time.

If DRB-Hicom loses its majority shareholding, it could be the end of the Proton marque which has negligible international brand recognition. Foreign carmakers with a small existing presence in the region might, however, see value in Proton's underutilized manufacturing facilities to tap into Southeast Asian markets, said BMI Research, a unit of Fitch Ratings.

On Sept. 28, Albar told reporters DRB-Hicom will remain a substantial shareholder of Proton "without a doubt". He stopped short, however, of revealing if it will remain the majority shareholder, and said that new possible shareholding structures are "still up in the air."

Proton has continued to enjoy its "national" car status despite being privately owned for some time. Malaysia seems intent finally on placing profitability before national pride. 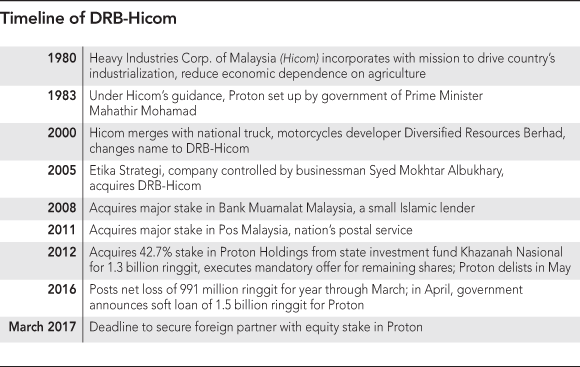