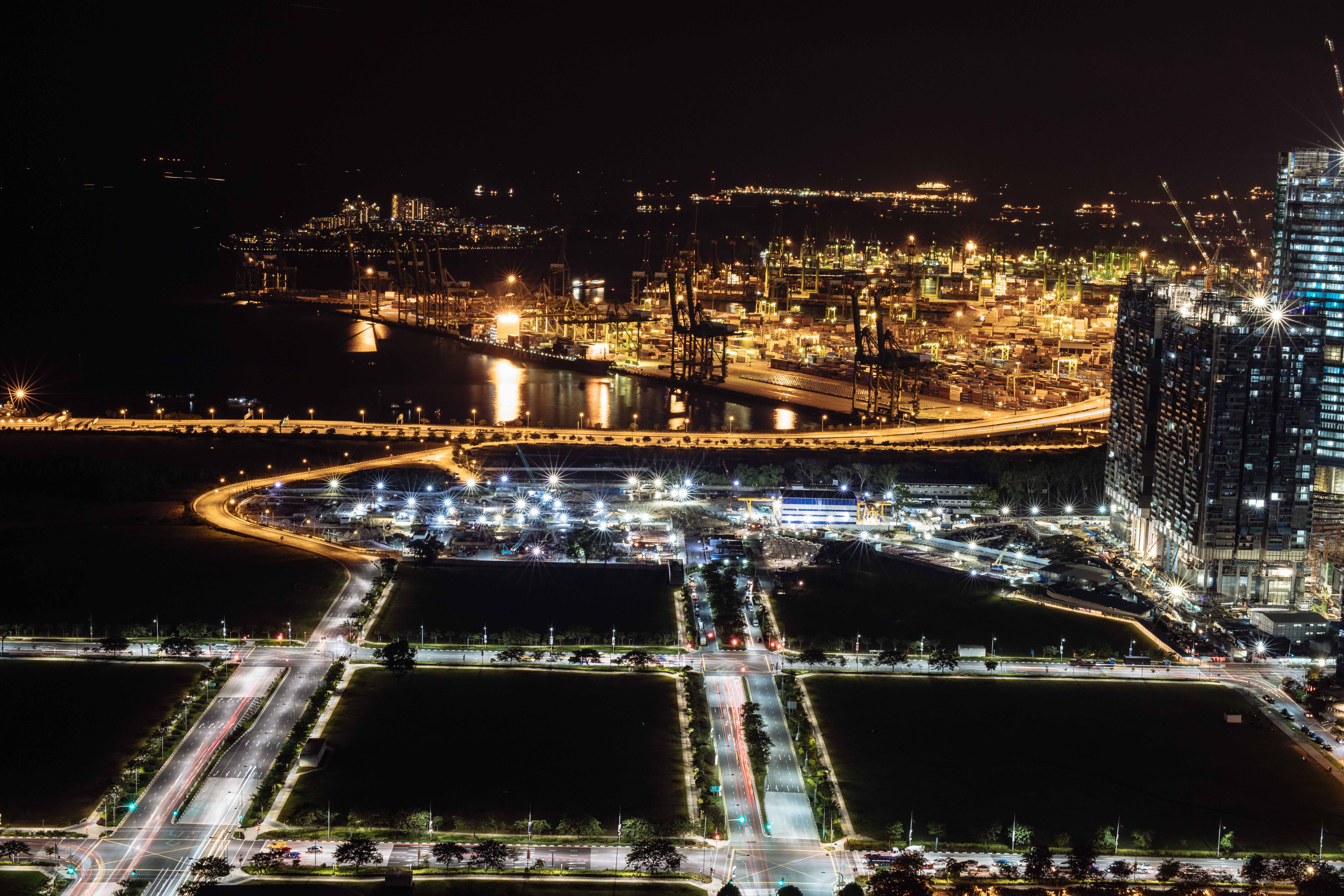 Night view of Singapore's port. The city relies on its strategic location as a transshipment hub for world trade, but protectionist rhetoric in the West threatens to undermine its future growth. (Photo by Peter Guest)

SINGAPORE -- In Infinium Robotics' headquarters, in a double-height unit in a grubby industrial estate on the northwestern edge of Singapore, there are scattered parts of miniature helicopter rotors on the floor and in plastic tubs all around the walls. A 3D printer is on hand in a corner, ready to replicate broken pieces of equipment or fashion new ones. From behind a screen, a pair of engineers are concentrating on trying to make a dinner plate-sized drone land on a small cross on the floor.

Founded by former Singapore Navy officer Junyang Woon, Infinium Robotics is working on commercial drones that can autonomously patrol warehouses, scanning stock and taking inventories. The system is designed to reduce the need for humans to perform the manual and labor-intensive task of stocktaking. Woon has already signed up a local company to run trials in a 9,000-sq. meter warehouse nearby, and has interest from several others. "Industry players are really looking into this. We feel there is a huge demand," Woon said.

Innovative, homegrown, and global in its appeal, Infinium is the kind of business that Singapore wants to promote and support as it reacts to shifts in the world order that have shaken the underpinnings of five decades of economic growth and development. Junyang Woon, founder of Infinium Robotics, poses with a drone at his headquarters in Singapore. (Photo by Peter Guest)

On Feb. 7, Singapore's Committee on the Future Economy -- a 30-member group of leading businesspeople, co-chaired by the ministers of finance and trade and industry -- presented a landmark report that will set the tone for the direction of economic policy in Singapore over the next few years. The report, which was initially intended to focus on the impact of disruptive technology and demographic change, is understood to have been delayed to take into account the result of the Nov. 8 U.S. presidential election.

For Singapore, it is an unusually pessimistic document, warning that a "dark shift in mood" away from globalization presents a sizable challenge for a country that has relied on being a hub for world trade and on attracting multinational companies to its low-tax, politically-stable environment.

"There seems to be a dark undertone that runs throughout the report, warning of difficult times to come," said Nicholas Fang, executive director of the Singapore Institute for International Affairs, a think tank in the city-state.

The CFE said that despite these threats, Singapore should not turn inward. "Given the current sentiments against globalization, we must not only resist protectionism but forge ahead to deepen linkages with our overseas partners and seek opportunities in new markets," the report said.

The U.K.'s vote to leave the European Union in June 2016 was in part a reflection of brewing anti-globalization sentiment in developed countries, fueled by unemployment in former industrial heartlands, that metastasized into a full-throated roar against the established international order. In November, that same anger helped to propel U.S. President Donald Trump, and his manifesto based on economic nationalism, into the White House.

During his campaign, and once he had been elected, Trump raged against the perceived iniquities of trade agreements, as well as the "offshoring" of American jobs. Even tiny Singapore got a name-check in one speech in November, in which the then-candidate said that Baxter Healthcare's decision to move nearly 200 jobs from America to the city-state amounted to "jobs theft." Within days of taking office, Trump had pulled the U.S. out of the Trans-Pacific Partnership trade agreement, which was strongly supported by Singapore, one of 11 other signatories.

Fang is optimistic that the new U.S. administration will turn out to be focused in its trade spats, rather than beginning a broad offensive against the mechanisms of global trade.

"He's made some disparaging comments about the [World Trade Organization], but I don't think he's going to dismantle it," Fang said. "Rather, he's more focused on protecting specific sectors [such as] automotive manufacturing ... or in certain instances he's been saying [he wants] to protect the economy against certain specific trade partners, like China. I think Singapore's [trade agreement] with the U.S. is a long-standing arrangement, and it's one in which the U.S. actually has a surplus, so I doubt he would look at it unfavorably."

Even so, for a small, open economy that needs trade through its ports and multinational companies to fuel its growth, and relies on larger partners to play by the rules, these are troubling times.

"We've seen a massive increase in uncertainty in the world, [about] what are the rules of international trade, what are the rules of the international order?" said Pushan Dutt, professor of economics and political science at the Singapore campus of Insead, a graduate business school with campuses in Europe, the Middle East and Asia. "I think these things are fundamentally unforecastable. Nobody knows what the world is going to look like in terms of these rules, and how these political shocks and the rise of populism are going to affect these rules."

These uncertainties, and the impact that they could have on how capital and companies move around the world, are exacerbating existing challenges for Singapore, which has already begun to worry about how to remain competitive as labor costs rise and its population ages. The Marina Bay financial district in Singapore. The country's regulators are relaxing some rules to get capital flowing from banks into small businesses, in order to reorient the economy away from big multinational corporations. (Photo by Peter Guest)​

To be competitive, Singapore must focus on innovation. The CFE suggests that means putting less emphasis on multinationals, and more on local small and medium-sized businesses in innovative growth sectors -- in other words, companies like Infinium Robotics.

The government's 2017 budget, announced on Feb. 20, set aside S$2.4 billion ($1.68 billion) to implement the CFE's recommendations. This included S$80 million for programs to support "digitalization" of small and medium-sized enterprises; a new Tech Access Initiative from the Agency for Science, Technology and Research, and a S$600 million International Partnership Fund to support local companies to scale up and move overseas. A further S$100 million has been earmarked for other industry training programs.

Irvin Seah, an economist at Singapore's DBS Bank, said that there has been "a marked shift in focus" toward SMEs, pointing to a little-discussed section of the CFE report that sets out the roles that various government agencies play in the economy. The report advises that the government's Economic Development Board should lead the transformation of several key sectors.

"The traditional mandate of EDB is to attract [foreign direct investment] and to court multinational companies to come to Singapore," Seah said. Now, the EDB will be pushing to build capacity in local businesses too.

"While we continue to keep our door open to multinational companies, and to keep our door open not only to companies but also to talent ... now there is a deliberate and very robust effort to promote the growth of local companies in terms of deepening their capabilities in certain technologies or certain industries," Seah said. He added that while this strategy has taken on more urgency, given the new global backdrop, it was vital anyway.

"The population is aging. By 2025, the population is starting to shrink. That means that we could potentially lose our appeal to [multinational companies] by that time. And demographic shifts are very difficult to reverse," he said.

Dutt, though, is not entirely convinced by this model. "Their traditional model has been big multinationals driving the economy. Big firms. Now they are switching the emphasis to small and medium enterprises," he said. "I'm not sure they have the infrastructure and all the knowledge and capabilities to really have small and medium enterprises drive innovation. So maybe they should continue to play on their strengths."