MANILA -- Davao, on the southern island of Mindanao and the city where President Rodrigo Duterte served as mayor for more than two decades, is enjoying an investment boom. Commercial complexes are going up. Homes are being built. The city even has too many power stations.

A major reason for the boom times is crime, rather a lack of it, at least compared to elsewhere in the Philippines. 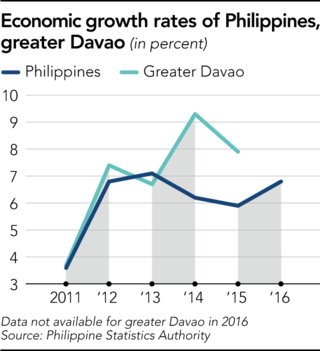 Now the Duterte administration, which places infrastructure development in local cities at the center of its economic policy, is hoping to boost economic growth across the Philippines by using Davao as a model.

PLDT, the Philippines' leading telco, recently set up a data center in the country's third-largest city, after Manila and Cebu. It is PLDT's first data center on Mindanao, where the company expects growing demand for cloud and backup services. PLDT also has set up a relay station for fiber-optic networks.

During the opening ceremony for the center, Chief Revenue Officer Eric Alberto in February said he wants to improve infrastructure for digital-related services and promote economic development on the island.

Mindanao, with an area of about 100,000 sq. km and a population of more than 20 million, is the country's second-largest island, behind the northern island of Luzon. Duterte became mayor of Davao in 1988, serving until he was elected president last year.

While mayor, Duterte took a tough stand against murder, kidnapping and other crimes. As he did, he transformed Davao into one of the country's safest cities, where stores and restaurants can stay open 24 hours a day.

Agriculture used to be the city's main industry, but now business outsourcing companies are all over the place, mostly to serve the information technology and other industries. Partially as a result, Davao has become the Philippines' largest IT hub, home to cutting-edge buildings suitable for these services.

The city is growing more affluent. SM Investments, the country's largest retailer, has opened a large shopping mall in Davao, while Ayala Land is putting up a mixed-use development.

In 2014, Greater Davao had the highest economic growth rate, 9.4%, of the Philippines' major metropolitan areas. The national growth rate was 6.2%.

And since Duterte won the presidential election last May, Davao has been on the receiving end of a massive investment binge. PLDT and Globe Telecom have added mobile phone base stations in and around Davao, greatly improving cellphone service reliability.

The Philippines' communications networks are so fragile that mobile phone calls often get cut off, even in central Manila. But the capital will have to wait; Duterte's hometown is the top investment priority, a telco representative said.

Even other countries' leaders seem to be placing importance on the president's hometown. Japanese Prime Minister Shinzo Abe one January morning stopped by Duterte's house for breakfast.

In March, Chinese Vice Premier Wang Yang met with Duterte in Davao. Local media reported that Beijing agreed with the Philippine government to start a feasibility study for a plan to build a 23km highway in Davao. Beijing has also shown interest in a monorail construction project in the city and in a Mindanao railway that would stretch 2,000km.

These projects could help deal with the major downside to the development frenzy -- worsening traffic snarls.

Although Washington-Manila relations have deteriorated since Duterte took office, Sung Kim, the U.S. ambassador to the Philippines, met Duterte in late March (yes, in Davao) and agreed to strengthen economic relations.

Now about all those power stations. They make for quite the irony. Utilities cannot generate enough electricity to feed the entire country's appetite. But, Erramon Aboitiz, CEO of Aboitiz Power pointed out, "In Mindanao, we are seeing a potential oversupply, it will take us several years to grow to cover that over supply."