SINGAPORE -- Malaysia and Singapore are set to add a new cross-border commuter connection, as the countries' leaders further deepen a relationship that has not always been cozy.

Singaporean Prime Minister Lee Hsien Loong and his Malaysian counterpart, Najib Razak, on Tuesday agreed to build a 4km train line linking northern Singapore with the southern Malaysian city of Johor Bahru. The train, called the Rapid Transit System, is to begin commercial operations by the end of 2024 and will have the capacity to carry up to 10,000 passengers each way every hour.

Currently, the areas are connected by a bridge that is plagued by traffic jams at rush hour and on holidays.

"The RTS is an important long-term cross-border project," Lee told reporters after meeting with Najib on Tuesday. "When completed in 2024, it will benefit thousands of daily commuters and reduce congestion."

Najib said the new train would bring "seamless connectivity" between the two countries.

Though the line will run only 4km, the impact will be huge, one expert predicted. 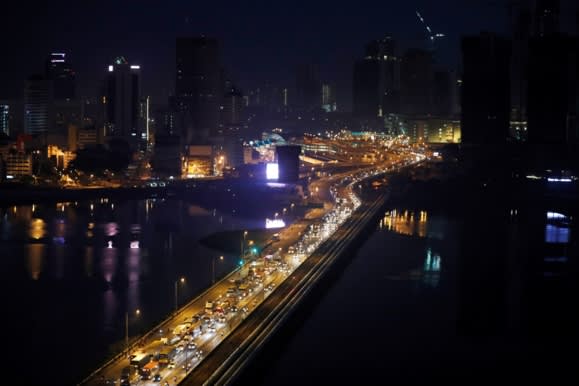 Commuters cross between Malaysia, in the background, and Singapore during rush hour.   © Reuters

Factories in northern Singapore "will benefit from easier commuting times for their workers, many of whom live in Johor," said Francis Hutchinson, senior fellow at the ISEAS-Yusof Ishak Institute -- a Singapore-based research center of Southeast Asian studies.

On the Malaysian side, he said, "the RTS has the potential to revitalize downtown Johor Bahru, with increased numbers of Singaporeans moving north to live as well as shop." Tuesday's agreement follows another major cross-border transport project between the two countries: a high-speed railway agreed upon in 2016 and scheduled to launch in 2026. The high-speed line will connect Singapore and Kuala Lumpur, about 350km apart, in 90 minutes.

These agreements reflect a growing mutual dependence. Lee and Najib have met almost every year since the Malaysian prime minister was inaugurated in 2009. "We have many concrete projects which our peoples will benefit from," Lee said, adding, "We are constantly looking at new areas [of cooperation] to better the lives of our peoples."

This stands in contrast to the relationship under long-serving former leaders Lee Kuan Yew of Singapore and Mahathir Mohamad of Malaysia. "I cannot say I was a close friend of Kuan Yew," Mahathir wrote on his blog after Singapore's founding father died in 2015. The two men agreed on little.

Hutchinson pointed out that today's closer ties benefit each side, as Singapore faces "increasing pressure on land and labor," while Malaysia has more available land and manpower.

During the news conference, the two leaders also commented on the criteria for selecting a winner of the high-speed rail contract.

Najib said the bidding, which started last month, should "take into account longevity, life-cycle cost, maintenance and especially local content." Lee said "it is not just price, but reliability, conditions of financing, track record and confidence of companies."

Groups from Japan, China, South Korea and Europe are expected to compete for the contract.