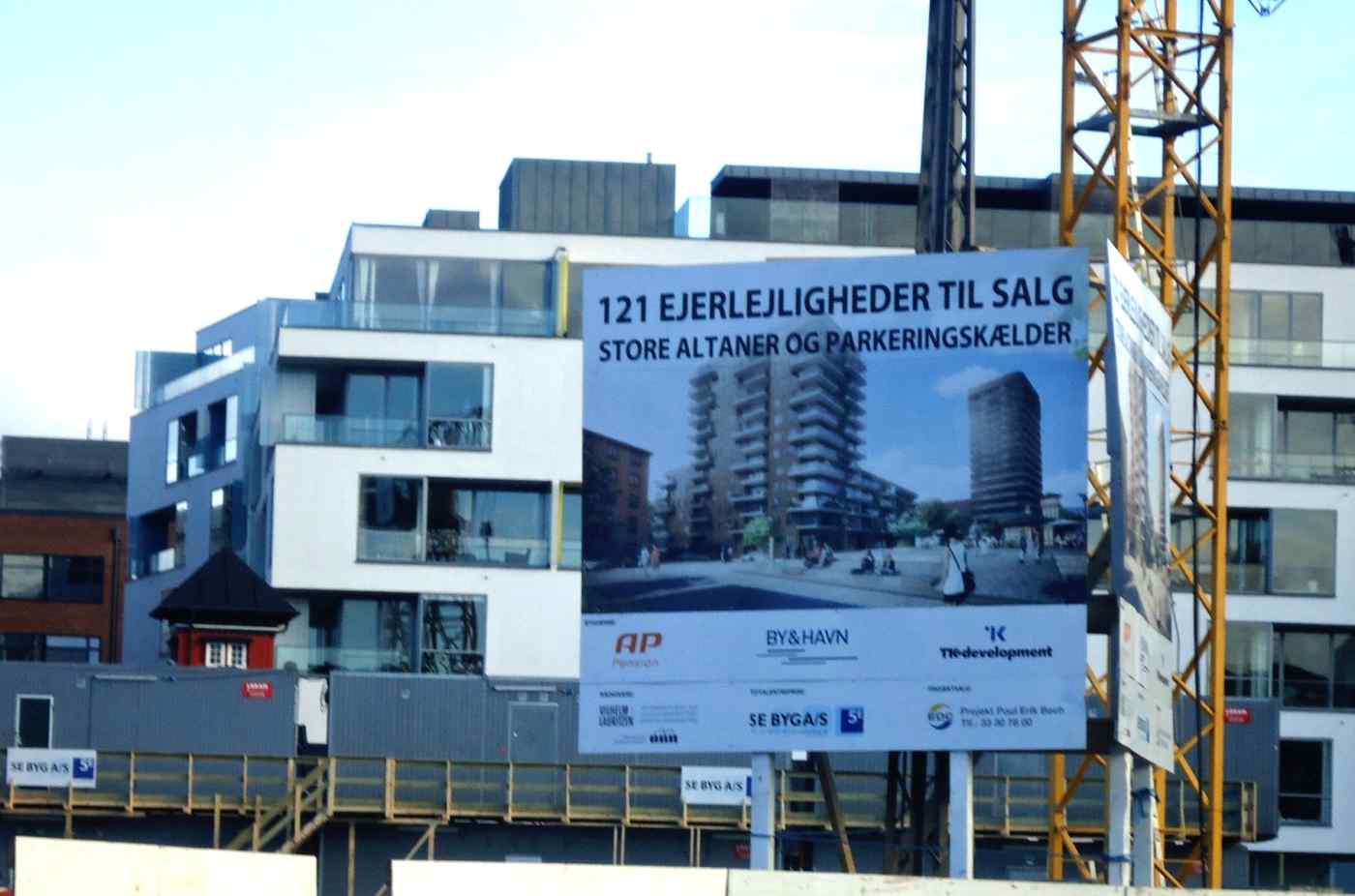 Many luxury residence buildings are under construction in central Copenhagen because of a property boom in Denmark.
MANABU MORIMOTO, Nikkei staff writerFebruary 16, 2016 15:30 JST | Japan
CopyCopied

COPENHAGEN -- Japan's adoption of a negative interest rate policy, announced by the country's central bank in January, went into effect on Tuesday. Under the rather unfamiliar scheme, the lender pays interest on a loan, not the borrower. How will the new monetary policy affect the lives of ordinary people? A hint may be found in Denmark, one of the countries in Europe that already has introduced a negative rate policy.

Denmark, and its capital of Copenhagen in particular, has been experiencing a housing market bubble for years. One of the hottest spots may be a huge property currently on sale in the capital's posh district of Oesterbro -- at the price of 25 million krone ($3.74 million). Countess Alexandra of Frederiksborg, the former wife of Prince Joachim of Denmark, bought the property in 2011 for about 6 million krone. The price, probably one of the highest for property purchases in the country at the time, has more than quadrupled in five years.

Danmarks Nationalbank adopted a negative interest rate policy in July 2012, hoping to discourage appreciation of its currency. The scheme is similar to the one Japan adopted; banks pay interest on a portion of their deposits at the central bank when they keep more than needed.

The new policy quickly had an impact. Sharp declines in interest for mortgage loans triggered a property boom in Denmark. Even negative-rate mortgage loans were offered, which caused housing prices to surge further.

As the central bank intended, the policy has stopped the Danish krone from rising too much. This has helped the country's economy grow at the lower 1% range in 2014 and later, whereas in 2012 through 2013, the country posted negative economic growth.

The Danish housing market has continued on its upswing since then. Property prices in the Oesterbro area showed a year-on-year increase of 15% during the July to September quarter in 2015. This is an all-time-high level and even stronger than the previous property boom that occurred before the global financial crises emerged in 2008.

To hold off a bubble from emerging in the market, the Danish government in November required property buyers to pay an initial deposit of 5% or more of the property price. This appears to have slowed surging prices.

Nordea Kredit, a Danish mortgage lender, has introduced a loan with an interest rate of minus 0.3%. But, in response to the question of whether a borrower can receive interest on a mortgage, a representative of the company said that is not quite correct. According to the representative, certain mortgage holders can receive discounts on charges they pay for the mortgage. The deduction is equivalent to the interest.

Say a borrower signs a 1 million krone housing-loan contract. The borrower is charged a 900 krone monthly fee for the loan. Under the negative-rate mortgage scheme, the borrower can save 117 krone on this charge. In reality, it is nothing like borrowers receiving money on the loans they take out. Also, the lender provides this opportunity to only limited customers -- the richest segment of less than 3% of the lender's 220,000 customers. The benefits of the scheme are not available to ordinary citizens.

Theoretically, under a negative interest rate policy, bank account holders will have to pay interest on their deposits to the bank. According to the Danish Bankers Association, banks are passing on the increased costs of the negative interest rate via higher charges to large corporations. Individual customers have not been charged anything. This means the banks have shouldered the increased costs.

The direct cost banks have paid to the central bank totals about 1.2 billion krone annually, a representative from the association said.

Torben Frederiksen, a senior vice president at the asset management unit of Alm. Brand, a Danish financial service, warns that the negative interest rate policy can be an effective means to stop currency appreciation over the short term. However, it entails a significant risk to the economy over the long term, he said.