About 23,000 workers in resort of Da Nang have taken temporary leave DA NANG, Vietnam -- A handful of lifeguards patrolled the main beach of Vietnamese resort city of Da Nang, but not a single sun worshipper.

The My Khe beach that is normally packed with tourists has been closed as part of the country's new social distancing campaign against the spread of the new coronavirus. A loudspeaker system plays a recorded public service announcement in Vietnamese and English to remind people to stay away, wear face masks, and keep two meters away from others.

As the campaign came into effect on April 1, Da Nang started to resemble a ghost town, with only supermarkets, hospitals, pharmacies and ATMs remaining open.

The DLG Hotel, a five-star hotel located on the beach, would normally be at around 80% capacity at this time of year, but the lobby was completely empty.

"The Vietnamese government has been doing a great job to protect their people," the hotel's director of sales and marketing, Ha Huyen, told the Nikkei Asian Review. So far, she said, no one has been laid off, and the hotel is working to optimize working schedules.

Vietnam relies heavily on its tourism sector -- which accounts for 8% of its annual gross domestic product, according to the World Bank. But with the country ratcheting up anti-virus measures, the industry is set for one of its worst periods in recent times.

"The government of Vietnam and the responsible ministries are closely watching the situation and we have sketched out the different possibilities and scenarios that might happen because of the crisis and the related consequences on the economy," director for the Department for General Economic Issues and Integration Studies at the Central Institute for Economic Management in Hanoi.

"But we are also open to the different responses that might be implemented if the crisis continues longer." Domestic tourist flights to Vietnam in March plunged by more than 60% from the previous month, and international arrivals were down nearly 40% in the first quarter of 2020 from a year earlier, according to the Da Nang Tourism Association.

Da Nang, Vietnam's fifth largest city, is located on the central east coast and is a vital pillar of the industry. The loss of tourists to the city cost in 700-800 billion Vietnamese dong ($30-34 million) in the first quarter, according to the city's tourism association.

In an attempt to bolster the stuttering economy, the Vietnamese government on March 3 announced a 27 trillion dong ($1.1 billion) package to help businesses. A return to something like normalcy will depend, however, on how long the global pandemic drags on.

A small vegetarian restaurant in Da Nang called Kokogreen, which is popular with foreigners and locals, remained open in the afternoon but customers could only order take-away at the door.

A manager, who gave her name as Jenny, explained they would be closing for two weeks and that all food deliveries from other restaurants would also be halting in the city. 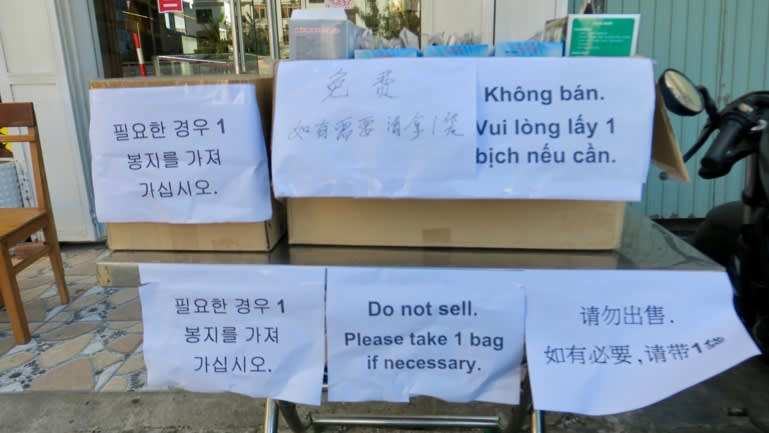 A box of free masks in front of a restaurant near My Khe Beach in Da Nang, Vietnam. (Photo by Hugh Bohane)

As of Monday, Vietnam had 241 cases of coronavirus and no deaths, according to a tally by Johns Hopkins University.

With the virus originating over the border in China, Vietnam swiftly closed its borders and airports to traffic from its neighbor in early February. It has since reopened some crossings to keep trade flowing, but there backlogs.

Last week, Vietnamese Prime Minister Nguyen Xuan Phuc ordered the suspension of all international flights for foreign nationals, except for those on official or diplomatic trips. And on April 1, it issued a 15-day directive for people to stay at home and ban public gatherings of more than two people.

Many Vietnamese citizens and expats in Vietnam, have praised the government's swift response to the crisis. Some observers attribute this to Vietnam's past experiences handling SARS and the 2007-2008 global financial crisis.

The health ministry has been sending regular text messages to all mobile phone users in Vietnam to encourage people to wear face masks, and wash hands with soap or hand sanitizer. On March 6, Vietnam announced it will be producing 10,000 COVID-19 test kits daily, after a successful pilot and approval from the World Health Organization.

Anh Duong, a director at the Central Institute for Economic Management, a government think tank in Hanoi said the loss of tourists from China and South Korea -- the two biggest sources of vacationers to Da Nang -- has really hurt the market.

"GDP growth in 2020 is expected to slow down for Vietnam and the impact to tourism is very complicated... This is expected to last for the coming months," Duong said.