The fundamentals of China's overheated housing market have been undergoing dramatic change. Unlike in the past, most home purchases over the last two years have been financed using mortgages, rather than cash. Now that Beijing is tightening liquidity, this suggests the property market could turn down more violently than in past cycles, with potentially ominous ramifications for the broader economy.

Total mortgage debt surged 37% in 2016, but still represented only 24% of China's gross domestic product. The comparable level in developed economies is much higher, leaving plenty of scope for Chinese mortgage lending to keep expanding. In principle, this is good news.

A structural increase in the ratio of mortgage credit to GDP shows China's financial system is becoming more sophisticated and is starting to channel savings more efficiently from the old to the young. Unlike in the West, young Chinese eager to clamber onto the property ladder have in the past had to rely on family and friends, rather than banks, to finance their first homes.

But for a deepening of China's mortgage market to truly benefit the economy, two things are needed. First, mortgage borrowing and the housing market must be properly regulated and supervised; and second, their development must be part of a broader set of reforms.

Neither of these conditions holds yet, increasing the dangers inherent in China's recent credit-fueled housing boom.

By some estimates, property development and ancillary industries together account for more than 20% of Chinese GDP. Their importance to the economy cannot be overstated. Any downturn in the housing market, even if commercial real estate remained insulated, would jeopardize the cash flow and debt-servicing ability of heavily leveraged property developers, with potentially severe repercussions for the companies' lenders and bondholders.

Land sales are a major source of revenue for China's cash-strapped local governments. A slump in the appetite for property development would strain their ability to finance education and social services.

HIGH STAKES House prices are also a critical barometer of household confidence. A steep fall in prices would not only destroy family wealth, prompting people to save more and spend less, it could even undermine the trust of ordinary Chinese in the capacity of the ruling Communist Party to make President Xi Jinping's nebulous "China Dream" come true. In the extreme, households could lose confidence in the yuan and try to move money out of China and into other currencies. So the stakes are high. 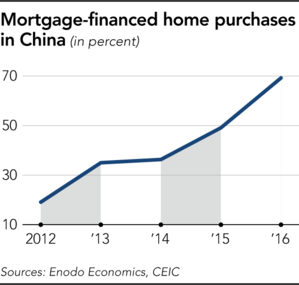 As things stand, China's closed capital account keeps most of the country's vast household wealth dammed up at home. Not surprisingly, property has been a favored outlet as people have sought a return on their wealth, especially since the global financial crisis.

With a dearth of investment alternatives, most homebuyers, until a couple of years ago, purchased both units for their own use as well as ones for investment with cash. As a result, during policy-induced downturns, few people were forced to sell by debt pressures. They could hold on to their properties without the threat of negative equity.

We estimate that nearly 70% of housing transactions were financed with a mortgage last year, double the share seen in 2013. This means that the government's latest tightening efforts will bite more deeply.

Beijing started to crack down on the housing and mortgage markets in late 2016 after identifying property speculation as a key threat to economic and social stability. Officials have increased minimum down payments, tightened rules on home loans and started to raise mortgage rates.

LOOKING INTO BUYERS Beijing is correct to come down heavily, as it appears the surge in housing demand during 2015 and 2016 was driven predominantly by investment rather than owner-occupier demand.

It has always been very difficult to distinguish between these two sources. One way is to compare property sales with the sale of home appliances. Investment properties in China are often not rented out because buyers rely on capital gains rather than paltry rental yields to make a return on their investments. Another feature of the market is that, unlike in most other countries, properties in China tend not to be sold with fitted-out kitchens. So if housing is booming because of investment demand, homes are likely to stay empty and sales of household appliances will lag.

That is indeed what the figures show. Sales of washing machines and refrigerators have been muted over the past two years. This implies that the latest property spree has not only been financed on credit, but also fueled by investment demand.

An increase in genuine owner-occupier demand, even if financed with mortgage debt, would have been a positive development. For one thing, there are millions of migrant workers who want to settle in their adopted home cities.

China's mortgage mania looks instead to have been propelled mainly by speculation. In 2015 and 2016, peer-to-peer lending surged, with a chunk of the borrowed money used to put down deposits on homes.

On the face of it, unlike the U.S., where zero down payment mortgages proliferated in the last throes of the subprime boom, Chinese regulators have never allowed minimum deposit levels to fall below 20%. For second homes, the minimum has ranged from 30% to 80%.

But the Chinese thirst for property has motivated people to find a way around the restrictions. This is easier to do in China, where the mortgage market has a much shorter history and the shadow banking system is so large.

P2P lenders began to explicitly offer loans for down payments in 2015. Within a year, lending for that purpose had risen tenfold. The authorities duly cracked down last year, but other forms of P2P business continued to grow rapidly. Because money is fungible, it would not be surprising if some of the loans are being surreptitiously used for down payments.

For their part, property developers have started to offer loans covering 100% of a buyer's down payment with no collateral required, though naturally such loans carry steep interest rates.

Beijing is correct to clamp down on lending for down payments. But given the precarious state of China's financial sector, even well-intentioned regulatory initiatives risk undermining confidence. This danger is all the greater now that Guo Shuqing, the new head of the China Banking Regulatory Commission, appears determined to halt the explosion in risky shadow bank lending.

The fundamental issue the authorities need to face is that the property market, like the stock market, is inevitably prone to periodic bouts of speculative frenzy because people have to keep most of their money inside China. Booms and busts would be less frequent if households could diversify their investments overseas. Keeping the capital account closed no longer serves China's economic interests.

Like Beijing's frantic efforts in 2015 to prevent an equity bubble first from forming and then from collapsing, recent efforts to control the housing market address the symptoms of the problem and not the underlying cause.

The prospects for China's property market hinge therefore to a large extent on whether or not Beijing opens up the capital account. This appears more likely than not over the next two to three years.