TOKYO -- Japan is rushing to rebuild after this week's bruising typhoon and earthquake, with airports and power plants restarting any part of operations they can. But a full restoration looks to take months, pointing to a broad impact on industry and especially tourism ahead of China's October holidays.

In the northern island of Hokkaido, which was hit by a powerful earthquake on Thursday morning, electricity was restored to at least 1.68 million buildings by Friday, accounting for nearly 60% of those affected. "Except for certain areas, the blackouts are expected to be resolved by Saturday," Prime Minister Shinzo Abe said Friday.

The Minister of Economy, Trade and Industry, Hiroshige Seko has asked businesses and households to cooperate on an effort to cut energy usage by about 10%, with an eye to a sudden spike in demand and risk of further blackouts come the beginning of next week.

Meanwhile in the country's west, the operator of Kansai International Airport released a recovery timetable for the typhoon-hit air terminal. Following the resumption of a small number of domestic flights, the airport will allow some international flights to recommence Saturday. 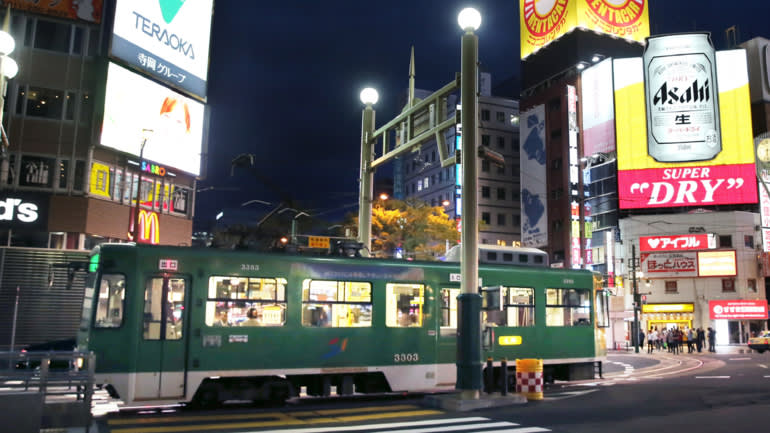 Streetcars in Hokkaido's capital of Sapporo resumed running after power was restored to much of the island Friday. (Photo by Maho Obata)

The more heavily damaged of its two runways, Runway A, is expected to reopen on a temporary basis in mid-September. The train that runs on the bridge connecting the man-made island that the airport is based on with the land will go back into operation in about four weeks, the Minister of Land, Infrastructure, Transport and Tourism, Keiichi Ishii, said on Friday.

Kicking off the international flights will be budget carrier Peach Aviation, a subsidiary of ANA Holdings, which will fly 12 routes to destinations like Seoul and Hong Kong. U.S. logistics company FedEx will also go back into business with international cargo flights starting on Saturday.

Restoration work on the airport is proceeding faster than initially expected, and normalcy could be mostly restored in about a month. Yet, with partial blackouts continuing in Terminal 1 due to flooded transformers, the airport is expected to operate far below its pre-typhoon average of receiving about 500 flights per day.

It is unclear whether Kansai International will be fully on its feet in time for the tourist bonanza accompanying China's weeklong holiday starting on its National Day Oct.1. Missing out on the spree would deal a severe blow to the Kansai-region economy.

The Osaka prefectural government has begun negotiating with local municipalities toward redirecting some flights from Kansai International to other nearby hubs including Osaka International Airport -- also known as Itami -- and Kobe Airport. A council comprised of 10 cities in the area around Itami on Friday accepted a plan to temporarily move up to 32 domestic flights per day to Itami.

But Itami, despite the "international" in its full name, serves only domestic flights, as does Kobe Airport. Redirecting international flights there would face high hurdles, such as a need to send equipment and staff to handle customs and border control.

Meanwhile, businesses nationwide are feeling the impact of work stoppages in Hokkaido. The Toyota Motor group has decided to halt 16 of its domestic plants beginning Monday, including in its home prefecture of Aichi and in the southern prefecture of Fukuoka, because a suspension of production at a Hokkaido subsidiary has stopped the flow of transmissions.

Toyota's Hokkaido unit is supplied with steel materials from Nippon Steel & Sumitomo Metal's works in Hokkaido's Muroran by way of parts makers. Blast furnaces at the Muroran works resumed activity Friday morning after an earlier halt, but the plant was unable to restart rolling equipment due to an interruption in power supply from Hokkaido Electric Power.

Panasonic has stopped work at a Hokkaido plant that produces graphite sheets, materials that help release heat from devices' central processing units -- products in which the company holds a high worldwide market share. Even once power is restored, there are concerns that equipment could malfunction and further delay the resumption of operations. Such a delay could ripple out and impact smartphone production.

In logistics, Japan Freight Railway has suspended train service between Hokkaido and Japan's main island. Home delivery service Yamato Transport, a unit of Yamato Holdings, and the postal-service arm of Japan Post Holdings have suspended pickups within Hokkaido and acceptance of packages bound for the island from elsewhere in the country.

The death toll from the quake had reached 18, with two people in states of cardiopulmonary arrest and 19 missing, authorities said late Friday.