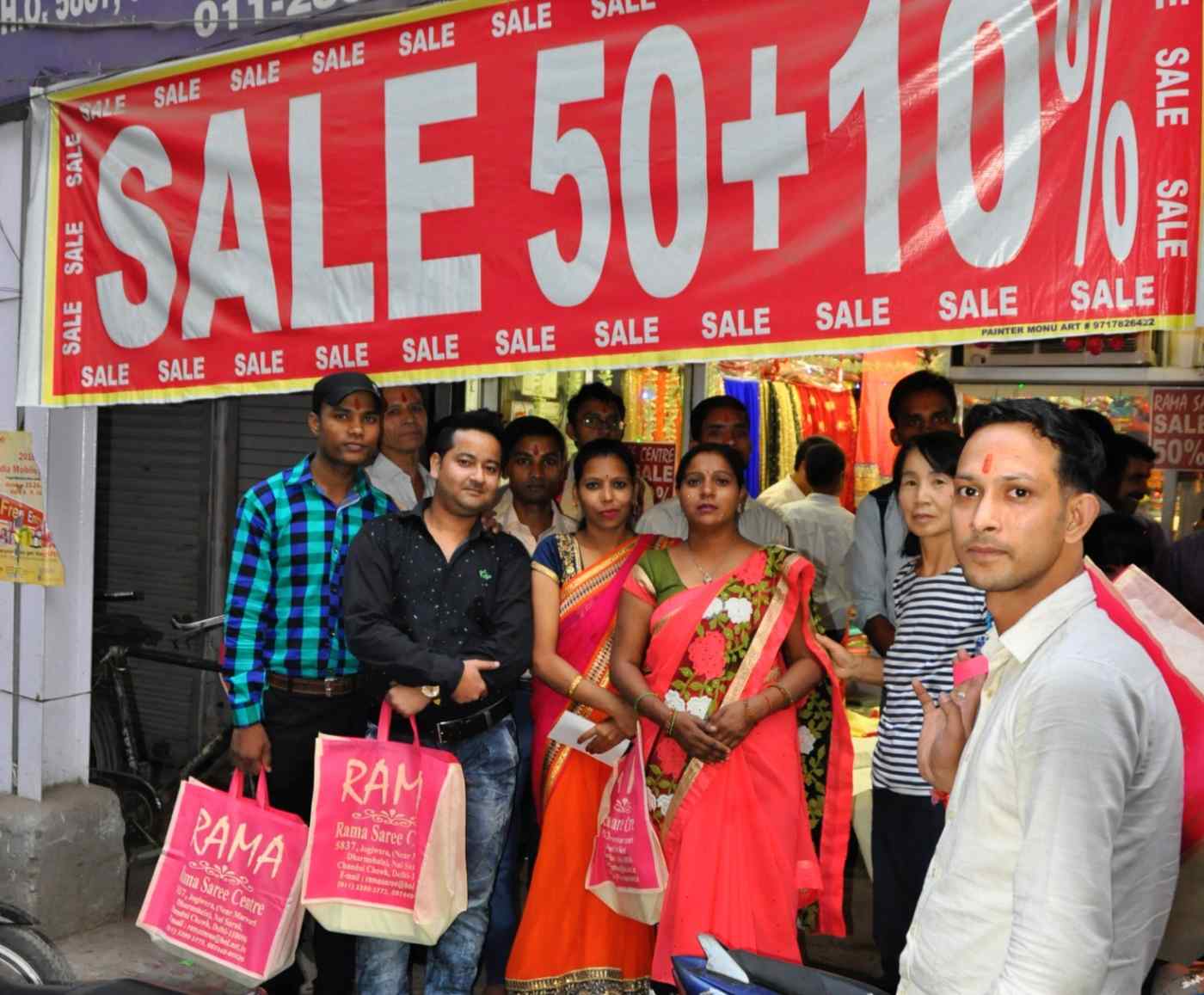 MUMBAI/TOKYO -- Diwali, India's new year festival of lights, is in full swing, capping local retailers' busiest month in what is shaping up to be a particularly bright year.

The five-day festival, India's largest annual celebration, kicked off Friday. In most of the country, the holiday celebrates the Hindu goddess Lakshmi, bringer of luck, beauty and wealth. The fourth day of festivities is also the first day of the new year, according to one Hindu calendar.

On Sunday night, the commercial capital of Mumbai was festooned with the lamps and lanterns that symbolize the holiday. Prayer, music and dancing enlivened the streets as fireworks and firecrackers snapped and popped in the background.

Local merchants have felt the festive mood for the past month or so. Diwali is seen as an auspicious time for consumption, making shopping and gift-giving as much a part of the holiday as cleaning house and decorating for the occasion. Many women out and about on Sunday were sporting brand-new saris. Rajesh Jha, a worker at a financial company, said he bought his wife a new Samsung smartphone this year, calling Diwali "the best occasion" to replace her old device. Last year's gift of choice was a blender, he said.

Sales of precious metals such as gold have risen more this year than is typical. Business this Diwali is expected to be better than last year, based on gold-buying patterns so far, according to Ramesh Kumar, a sales executive at Meghna Jewellers in Mumbai.

Things are looking up economically in more rural areas as well. Rainfall during this year's monsoon season, from June to September, came in around average after two years of drought. Household spending this Diwali period will likely come in 40% above 2015's figure, the Associated Chambers of Commerce and Industry in India said in mid-October.

Companies are angling to take full advantage of the spending surge. Fortpoint Automotive Cars, an authorized Maruti Suzuki India dealership, has trimmed 20,000 rupees off prices of the mass-market Swift and Alto lines. This amounts to a discount of more than 5% on Altos.

E-tailers have stepped up their presence this year as well. Amazon.com, currently the No. 3 player in India's e-commerce market, is using Diwali as a chance to take on market leader Flipkart. "The festive season is no doubt the biggest shopping season in India, and we expect a great festive season," an official at the company's Indian unit said. "We have 200% more sellers" and one and a half times more fulfillment capacity than before, the official said.

Amazon cut prices in three rounds throughout October. Certain clothing items were discounted by as much as 80%, with T-shirts ordinarily priced at more than 1,000 rupees dropping to the 400 rupee range, for example. The company is also working to rope in customers new to online shopping by having local businesses in 100 smaller cities and towns point shoppers to Amazon via in-store computers.

Growing environmental awareness and political developments are shifting spending habits this season as well. Use of firecrackers and fireworks has apparently fallen this year in areas such as Delhi and Mumbai where air pollution is a concern. "The level of pollution in our city is worrisome," one Mumbai man said. Many are forgoing firecrackers and buying eco-friendly lamps and lanterns this year, he added.

Some are also boycotting Chinese-made goods over Beijing's perceived support of Pakistan at a time when tension with India's neighbor in the disputed Kashmir region is growing. This has apparently impacted sales of a variety of goods, from firecrackers to kitchen utensils and lightbulbs. Demand for Chinese goods could plunge 45% during Diwali this year, the Confederation of All India Traders has calculated.

As global sales events go, the Christmas season continues to dominate retailers' calendars. The U.S. National Retail Federation forecasts retail sales minus automobiles, gasoline and restaurant spending in November and December of this year hitting $655.8 billion, or 3.6% more than in 2015.

China's Lunar New Year in January or February, as well as its Nov. 11 holiday, known as "Singles' Day," have also gained prominence in recent years. Retail spending during 2016's New Year week totaled 754 billion yuan ($111 billion at current rates), with daily spending coming in more than 30% above the average for the year. Luxury spending on such items as automobiles also climbed ahead of the holiday.

Companies now are minding the Indian calendar as well. Real personal spending in the year ended in March climbed 7.4% to a healthy 63 trillion rupees or so. Spending during Diwali and the month prior is a major factor in such growth, and tends to produce a spike in consumption each October-December quarter.