Don't count on an exit just yet

The British people have spoken and they have chosen to leave the European Union. European leaders have told the U.K. to hurry up and depart quickly. David Cameron is already packing his bags after resigning as prime minister. Companies and investors are drawing up detailed plans for life post-Brexit. 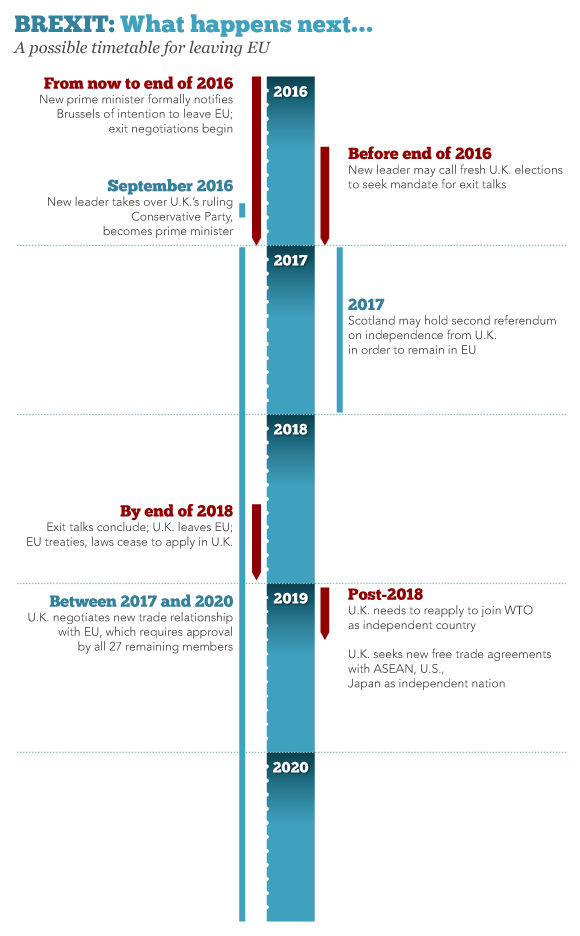 If calm heads prevail in Brussels and Westminster -- something by no means guaranteed in the febrile atmosphere following the referendum -- there is still a chance of saving Britain from the huge self-inflicted economic wound that is Brexit.

Firstly, the June 23 referendum is not legally binding. No British politician, of course, can dismiss it. But remember that the result was a narrow Leave majority of 52-48 on a 72% turnout. So fewer than four in 10 of the British electorate actually chose to quit. The other 63% either voted to Remain or did not vote.

This hardly amounts to a ringing endorsement of what will inevitably be a painful, divisive and complex process lasting several years, accompanied by a steady drumbeat of bad economic news.

A petition asking Parliament for a second referendum has already attracted more than 3 million signatures. The hashtag #regrexit is trending on Twitter. Although the petition has no legal force -- MPs are bound only to discuss it -- it will inevitably focus attention on the need for a second vote, either in a general election or a referendum, to endorse a negotiating strategy for Brexit.

It is worth remembering that as late as last year, leading Brexiter Boris Johnson was toying with the idea of two referendums -- a first one to put pressure on Brussels, then a second to endorse a wide-ranging renegotiation of British terms.

Many people who know Johnson, the front-runner to become the next British prime minister, believe the former London mayor never really wanted to quit the EU -- the Leave cause was simply a convenient platform from which to challenge Cameron for the party leadership. It is revealing that Johnson looked shell-shocked in his initial appearances after the result; he had not expected it.

And popular mandates are fickle beasts; the Scots voted 55-45 against independence last year, but the latest polls suggest they may well reverse that decision next year if Brexit goes ahead. France and the Netherlands initially rejected the EU's new constitution in referendums, then adopted a redraft of the document in subsequent parliamentary votes.

VOTING WITH WALLETS Secondly, the Brexit referendum decision is a highly unusual one because, economically speaking, it will produce almost no winners and a very large number of losers. Voters tend to vote with their wallets; they narrowly chose Brexit because the Leave campaign convinced enough people that all the warnings from experts about economic doom were false.

As those warnings come true, starting with last week's crash of the pound and plunges in British stocks, followed by international companies such as Ford Motor announcing reviews of their U.K. operations and possible shifts of jobs overseas, voters will have second thoughts. Nothing concentrates the mind like big job losses.

Thirdly, no process of British withdrawal from the EU begins until the U.K. formally notifies Brussels of its intention to depart under Article 50 of the bloc's constitution. Cameron has already said he does not intend to pull that trigger and will leave notification to his successor.

That means a gap of at least two months, possibly up to four, during which the British public can repent at leisure of its decision as the economic bad news builds up. It will become clear to even the least well-informed voter that the glorious future promised by the Brexiters is not materializing.

Fourthly, any new Conservative leader taking over as prime minister will be under huge pressure to hold a snap general election to seek a mandate for his or her withdrawal strategy from the EU. One of the many flaws in the Brexiters' case was a complete lack of agreement about which model the U.K. should follow in the event of an exit; they will not be able to keep all their promises of continued preferential access to the EU, no more contributions to its budget and tight controls on immigration. And the House of Commons is overwhelmingly in favor of Remain; as many as 80% of MPs do not wish to leave the EU.

Fifthly, all of the Brexit options are a nightmare for any incoming government to negotiate. Should the U.K. attempt to preserve access to the European single market in a Norwegian-style deal, even though this would mean continuing to pay into the EU budget, swallowing its rules and regulations wholesale and accepting free movement of citizens -- in other words giving up all the benefits touted by the Leave campaign? Should Britain try to cut a special bilateral free trade deal with a bloc full of angry countries in no mood to grant concessions? Or is the best route to simply go it alone with no deal at all and trade with Europe under World Trade Organization rules, which would almost certainly mean the end of much of the U.K.'s financial services, carmaking and aerospace industries, all of which rely on duty-free access to Europe? None of these choices is appealing and each is fraught with difficulty.

The Liberal Democrats, traditionally Britain's third electoral force, have already announced they intend to fight the next general election on a platform of staying in the EU. The Scottish Nationalists will do the same. If the main opposition Labour Party, currently in the middle of its own leadership turmoil, joins these parties, it is quite conceivable that the combined U.K. opposition could win a majority in a snap autumn election and claim a democratic mandate for keeping the U.K. in the EU. Then Brexit might never happen.

Far-fetched? On the contrary, such a scenario is entirely possible.

All it requires to happen is calm heads and clear minds on both side of the Channel. The initial angry reaction of some European leaders in telling Britain to leave quickly was understandable but wrong. The Continentals would do much better to keep quiet and allow the U.K. to stew in its own unappetizing juice for a few months -- then quietly offer the next prime minister a concession or two, giving him or her enough grounds to ask the country afresh about Brexit. The answer could well be very different the second time round.

One thing is for sure: Decisions that produce so few winners and so many losers are highly unlikely to be upheld in the longer term, regardless of how they were reached.

Michael Stott was U.K. news editor at the Financial Times and is now on assignment from the FT to Nikkei.