The city once saw huge influxes of migrant workers seeking better opportunities from across the country. Manufacturers from around the world mass-produced home electronics products in Dongguan for sale globally.

Those days are gone. Dongguan has rapidly lost momentum as a manufacturing hub. Its woes signal a broader shift taking place in the Chinese economy and point to a dark future.

Gao Min, president of Dongguan Zhaoxin Communications, a contract manufacturer that produced smartphones for shipment to Southeast Asia, in early January attempted suicide. "I can no longer make profits from the smartphone business," he wrote in a suicide note. "I feel indebted to many of my friends so the only option is to take my own life."

He tried to gas himself to death, according to a 35-year-old man who used to work at the Dongguan Zhaoxin's factory. Gao was saved. He has been in hospital for treatment since the suicide attempt.

The company suffered a sharp drop in orders from November and fell into arrears with salary payments. Saddled with ballooning debts, Gao tried to kill himself and the company went into failure as a result. Its factory used to have more than 1,000 workers just 18 months ago. It stands empty today. 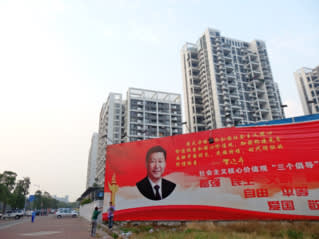 Rows of high-rise condo towers are seen in Dongguan, once a red-hot industry hub in Guangdong Province.

Dongguan Zhaoxin is not the exception. An adjacent, smartphone-making factory went offline after the head of its management disappeared during mid-February holidays. Factory workers and parts suppliers took to the streets, urging the local municipal government to do something about the situation. "The municipal government partially paid workers their wages in arrears," said a woman in her 30s that used to work at the factory.

Factories run by small and midsize businesses have folded one after another in Dongguan. In the 1980s, entrepreneurs from China, Hong Kong and Taiwan flooded in and developed the city into a major industrial center.  By then, Shenzhen, south of Dongguan, was already home to some major manufacturers, such as Foxconn of Taiwan. Entrepreneurs that saw little chance of beating bigger rivals in Shenzhen set up shop in Dongguan instead.

They procured large volumes of metals and plastics, and processed them into parts used in mobile phones and PCs. China was undergoing rapid economic growth and wages were still very low at that time. Entrepreneurs from Hong Kong and Taiwan found it easy to start processing businesses in Dongguan.

The city is well-suited to exports, thanks to its proximity to Hong Kong. The local government offered strong support for such businesses, which spawned a number of processing manufacturers specializing in a variety of electronics components. "In Dongguan, you can procure all the electronics parts that are available in the world," said an official at a major Japanese electronic components maker.

Even today, around 40 major Japanese electronics makers that are listed on the Tokyo Stock Exchange have operations in Dongguan. They include copying machine makers, such as Kyocera and Konica Minolta, as well as TDK and Mabuchi Motor. But these companies are increasingly hard-pressed to eke out profits amid soaring wages in China.

China's gross domestic product rose 7.0% from a year earlier in the January to March quarter on a seasonally-adjusted basis. Meanwhile, Dongguan's GDP increased 6.7% in the same period, falling below Beijing's 7% threshold and much lower than the 7.8% rise for 2014.

The number of migrant workers has also decreased by about 30% this year compared with 12 months ago. "There were 550 Japanese companies operating here up until four or five years ago; that number has dropped to around 450," said Kazutaka Takeuchi, secretary general of a Japanese business association in Dongguan.

Repercussions of the Dongguan slowdown are being felt elsewhere. In late April, Chinese real estate developer Kaisa Group defaulted on its U.S. dollar-denominated corporate bonds. It was the first such default in the Chinese real estate industry. The Shenzhen-based company has a number of properties in Dongguan. Shenzhen-based property developer Kaisa Group is selling a number of new condo buildings, such as this one, in Guangdong Province, China.

Some of Kaisa's newly-built condominium buildings have already been sold to another property company. Another new condo tower is still on sale without using the Kaisa name. Chinese property developers often stress their company names in sales and marketing pitches. Even so, there is not a single trace of Kaisa at the new tower, and many units remain unsold despite its relatively good location.

"Despite this prime location, the condo has very low-priced units whose per-square meter price comes to 6,000 yuan ($966)," said a sales representative.

Kaisa is known for its close ties with family members of Zhou Yongkang, a disgraced former member of the Chinese Communist Party's Politburo Standing Committee, the country's top decision-making body. Last year, the company was among those that were subject to Beijing's anti-graft investigation.

Dongguan is a city that has seen industrialization, the property boom and corruption all mixed up in one place. Its closing factories and empty high-rise condos seem to signal what lies ahead for the future of China.