BANGKOK -- Persistently dry weather in parts of Asia and Oceania has caused the most severe droughts in years, raising fears of economic and social impacts on the regions' communities. Thailand is now facing reduced production -- and therefore exports -- of rice, and Australia, usually an exporter of wheat, is rushing to import the commodity.

Somkiat Prajamwong, secretary-general at Thailand's office of national water resources, warned last week that 83 districts in 20 provinces in the country's north and northeast regions are "at critical risk of water shortages."

According to the Thai Meteorological Department, the drought has been caused by two major phenomenon. The first is less rainfall during the rainy season, which is a direct impact of the El Nino weather pattern that hit Thailand this year.

The second is the closure of dams in southern China, which have resulted in lower water levels in the Mekong River -- a major water supply for the lower Mekong basin, which covers Thailand, Laos, Myanmar, Cambodia and Vietnam.

The Thai water department said the country was set to experience its worst drought in a decade.

The government, led by Prime Minister Prayuth Chan-ocha, has asked China, Laos, and Myanmar to release more water into rivers to help relieve the drought conditions downstream in Thailand. Prayuth said those countries were "cooperating."

Water levels at a dam in Lop Buri, about 150km north of Bangkok, have become so low that the ruins of a flooded temple at the bottom of the reservoir have been exposed. In Surin province in the northeast region, residents have complained about a lack of tap water and rice drying out in paddy fields. Rice is a staple of the Thai diet.

In another northeastern province, Nakhon Phanom, located at the border between Thailand and Laos, the water level of the Mekong River has fallen to what could be its lowest level in almost 100 years.

Droughts are expected to have a significant impact on Southeast Asia's second largest economy.

Thailand is one of the world's two biggest rice exporters.

Charoen Laothamatas, president of the Thai Rice Exporters' Association, said the severe drought this year was expected to destroy a certain amount of the country's rice production and could lead to a cut in its rice export this year.

The organization has already lowered its export target for 2019 from 9.5 million tons to 9.0 million tons, due to intensified competition in the global rice trade and a stronger Thai baht. However, with the added pressure of the droughts, the prospect of achieving the revised target is fading.

India is Thailand's close competitor in the international rice market, but the highly populated country has also been struck by drought.

In India, the southern state of Tamil Nadu is suffering the most from the droughts. Chennai, the state's capital and the sixth largest city in India by population, has four main reservoirs to serve over 8 million residents, but these now hold less than 1 per cent of their total water capacity. The primary reason for the shortage is a lack of proper urban development, but a late and weak monsoon made the situation even worse.

Trucks with water tanks have been dispatched around the city to meet demand as taps have run dry, with people lining up with buckets. Tamil Nadu is home to many producers of vaccines and generic drugs that are used around the world. If the drought further affects the state, the global supply of pharmaceuticals could be impacted. 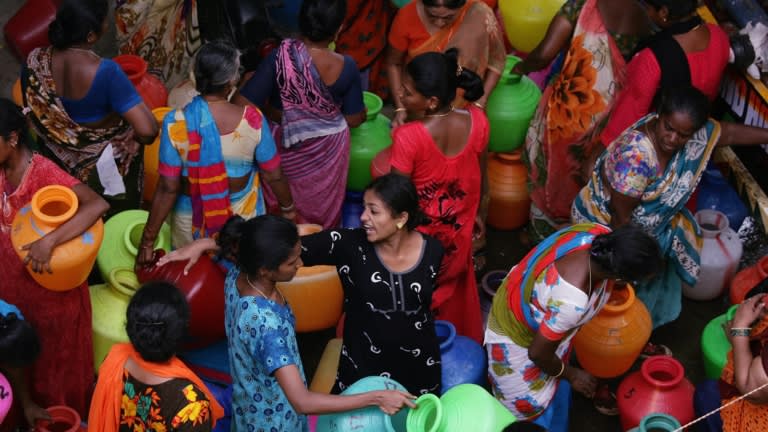 Residents gather to fill empty containers with water from a municipal tanker in Chennai, India on June 25.   © Reuters

There has also been a severe prolonged drought in eastern Australia. About 97 percent of the country's most populous state, New South Wales, is in drought conditions. The city of Sydney imposed its first water restrictions in almost a decade in June to slow the rapid decline of water levels in the city's reservoirs.

The region has been recording lower-than-average rainfall for two years. This has led Australia, which has long been one of the world's biggest grain suppliers, to import wheat for the first time in 12 years. In the year ending June 2019, Australia has produced just over 17 million tons of wheat, about 20% less compared to the previous year.

Reserve Bank of Australia Deputy Governor Guy Debelle warned in March that the drought had already cut the country's total gross domestic product by 0.15 percent. He expected the damage to weigh on economic growth this year even if average rainfalls return.

Elsewhere, Europe has been experiencing yet another summer of extraordinary heat waves.

The United Nations Economic and Social Commission of Asia and the Pacific, and the Association of Southeast Asian Nations, in April jointly released a report on drought risks. "There will be many more dry years ahead, and the area affected by drought is likely to shift and expand," it wrote.

It warned that droughts struck the poor the hardest and heightened inequality, as well as degrading land and increasing the prospect of violent conflict. "Increasing resilience to drought will require much better forecasting, and more efficient forms of response at both national regional levels," it suggested.