MANILA -- Philippines President Rodrigo Duterte has ordered the creation of a bank dedicated to servicing the financial needs of some 10.24 million Filipinos working overseas, it was announced on Monday.

In late September, Duterte signed an executive order authorizing state-owned Land Bank of the Philippines (Landbank) to acquire Philippine Postal Savings Bank, a state bank created to promote rural economic development, and to relaunch it as the Overseas Filipino Bank.

Landbank is the country's third-largest commercial lender with over 1.5 trillion pesos ($29.3 billion) in assets. It operates as a universal bank, and lends primarily to the farming and fishing communities.

The Philippine Postal Savings Bank dates back a century, and was mandated to cater to "unbanked" sectors. It is the 16th largest thrift bank in the country with over 9.3 billion pesos in assets. The government considers it no longer complements the national development strategy, and that the Overseas Filipino Bank servicing expatriate workers can make a bigger contribution.

"There is a need to establish a policy bank dedicated to provide financial products and services tailored to the requirement of overseas Filipinos, and focused on delivering quality and efficient foreign remittance services," Duterte's order said.

The executive order transfers the shares of the Philippine Postal Corp. and the Bureau of the Treasury to Landbank at no cost beyond the assumption of all liabilities.

Landbank has been ordered to infuse capital into Overseas Filipino Bank under the reorganization plan. 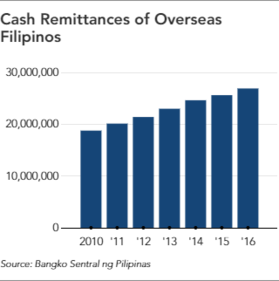 Remittances are a primary driver in the Philippine economy. These have been growing at an annual average of 6% since 2009, and last year reached $26.9 billion.

The funds have spurred consumer spending, a major economic driver, and bolstered U.S. dollar reserves that shelter the economy from external shocks. In September, gross international reserves stood at $81.35 billion -- enough to cover imports for over eight months.

Duterte promised to create a bank to cater to Filipinos working abroad during his presidential campaign, and won the votes of 70% of that constituency in the 2016 poll. The Philippine government estimates expatriates constitute about 10% of the overall population.