Marawi City in ruins as campaign against Islamic extremists goes on

MANILA Philippine President Rodrigo Duterte was not in a celebratory mood when he declared the liberation of Marawi, the southern city destroyed by one of the longest battles between government troops and terrorists.

"I just came from Marawi and by the grace of God, we have restored peace. But that could not be a cause for celebration because we have destroyed, in the process, the city," Duterte said on Oct. 17 at a forum on federalism in Camarines Sur Province, hundreds of kilometers from the main battle zone, as security forces hunted for dozens of militants still holed up in the city.

Six days later on Oct. 23, Defense Secretary Delfin Lorenzana, speaking on the sidelines of the ASEAN Defense Ministers' Meeting in Clark Freeport Zone, announced that the military forces had terminated all combat operations in Marawi.

"There are no more militants in Marawi City," Lorenzana said.

The liberation campaign gained momentum after the military killed militant leaders Omar Maute of the Maute Group and Isnilon Hapilon, the anointed emir of the Islamic State in Southeast Asia, on Oct. 16. On Oct. 23, the government declared victory over the Islamic State-linked militants after five months of gunfire and airstrikes that killed over 1,000 people and decimated large parts of the city.

Duterte wants to shift the Philippines to a federal government from a unitary system, saying it is the answer to the long-running Muslim insurgency in the south. The siege in Marawi, on the island of Mindanao, appears to bolster his case.

The crisis was a major test for Duterte, the first president from Mindanao. The siege began in May, when the military and police attempted to arrest Hapilon, a leader of the kidnap-for-ransom group Abu Sayyaf. On the same day, hundreds of militants aligned with IS overran parts of the city while snipers occupied buildings and bridges, prompting Duterte, who was in Moscow on a state visit, to place the entire island of Mindanao under martial law. 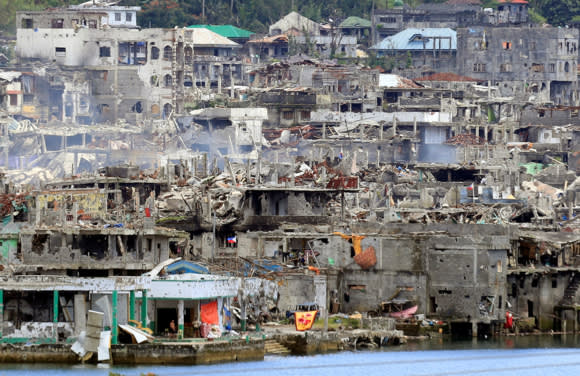 Damaged buildings are seen in a war-torn area of Marawi, southern Philippines, on Oct.24, a day after the Philippines announced the end of five months of military operations in the city held by pro-Islamic State rebels   © Reuters

BRACING FOR RETALIATION Efforts to wipe out the militants took longer than expected as jihadis from Indonesia, Malaysia and the Middle East joined the fight. The Philippine military -- accustomed to jungle warfare -- was caught off guard in an urban war zone.

During the fighting, 165 security forces and 47 civilians died. Close to 400,000 people fled the city, with dozens dying in temporary shelters, according to local media reports. Checkpoints and tightened security restricted mobility on the island.

"I first thought this would be over in three days," Lorenzana said in July. "It turned out that we underestimated their resolve to also stay there and fight it out."

Although Marawi has been liberated, the fight against terrorism and the rebuilding of the city will soon preoccupy Duterte. For one, the Philippines must brace for retaliation."The government must expect acts of reprisal," said Rodolfo Mendoza, a senior analyst at the Philippine Institute for Peace, Violence and Terrorism Research. "That is intended to maintain the high morale status of the militants."

Mendoza expects IS to appoint a new leader for the Philippine unit. A possible contender is Esmael Abdulmalik, the head of a pro-IS group of Bangsamoro Islamic Freedom Fighters in central Mindanao. "However he lacks the international ties, language skills and charisma," said Sidney Jones, director of the Jakarta-based Institute for Policy Analysis and Conflict, in an analysis carried by the Lowy Institute, a think tank.

Analysts say the death of over 900 militants during the clashes might have gained the sympathies of other extremists, while waning IS operations in Syria could prod Southeast Asian jihadis to return home.

Mendoza said Mindanao, which has been a hotbed of Islamic insurgency for decades in the mainly Catholic country, "is a very, very ideal site for regional cooperation and training for jihadists."

NEIGHBORS UNNERVED The crisis in Marawi has rattled Southeast Asian neighbors, who fear that such attacks could happen elsewhere in the region. In the same month that the Marawi crisis broke out, three people were killed at a bus station in Jakarta by two suicide bombers, while over 50 people where injured in southern Thailand in a twin bombing suspected to have been carried out by Muslim insurgents.

In June, security and diplomatic officials from the Philippines, Indonesia and Malaysia met in Manila and called for a comprehensive -- beyond military -- approach to fighting extremism. The trio also launched joint maritime and aerial patrols.

The persecution of the Rohingya Muslim minority group in the Buddhist-dominated nation of Myanmar has also sparked fears of extremism. "Indonesian and Malaysian mujahideen have long been interested in helping their brethren in Myanmar but have had no good channel for doing so," IPAC said in a report in May.

The reconstruction of Marawi, once a vibrant city and center of Islamic education, will be critical to contain the spread of radical ideologies, said Mely Caballero-Anthony, head of the Center for Non-Traditional Security Studies at Nanyang Technological University in Singapore.

"Families have been displaced, relations have been disrupted and you want to build as fast as possible because the longer you wait, you don't know if it will again perhaps escalate or come out in a different shape or form," Caballero-Anthony said.

The government has earmarked 15 billion pesos ($291 million) through 2018 to fund the rebuilding of the city after the siege, Budget Secretary Benjamin Diokno said on Oct. 18. Defense Secretary Lorenzana, however, expects total reconstruction costs to reach 50 billion pesos.

To help cover the costs, Diokno said the government plans to float up to 30 billion pesos worth of bonds next year, which could bloat the country's debt.

Foreign investors, meanwhile, are playing it safe. Some business process outsourcing companies have deferred their expansion plans, according to Leechiu Property Consultants. Foreign direct investment in July -- the latest figure available -- came in at $307 million, a 13-month low.

Duterte could only attempt to pacify locals furious about the devastation."There was no alternative and I could only extend my apologies to the Maranao," he said referring to the people of Marawi. "We did not want this to happen."