Naypyitaw fights to win back investors in wake of Rohingya crisis YANGON -- Economic reform is getting a second wind in Myanmar as the government tries to lure back foreign investors scared away by reports of human rights abuses against the country's Rohingya Muslim minority.

The government has announced the easing of restrictions on foreign banks and the creation of a new ministry to oversee foreign investment in an effort to restore investor confidence. But while the Rohingya issue may encourage reform, a growing sense that the economy is in crisis is putting pressure on the government to resolve it. Some previously reluctant business leaders are even beginning to speak out.

In early December, Yangon, the country's commercial capital, hosted a trade show for sewing machine makers and related manufacturers. Textiles are an important export for Myanmar, which has lower labor costs than its neighbors. But according to an executive at a Japanese company that took part in the event, moves to relocate clothing factories to Myanmar are slowing because of "the Rohingya issue and rising wages." The country recently increased the minimum wage.

The European Union grants tariff-free access to all imports other than arms from Myanmar, which is one of the world's poorest countries. But the EU is considering ending the trade preferences in response to the Rohingya refugee crisis. More than 700,000 Rohingyas have fled Myanmar, mostly to neighboring Bangladesh. Its critics accuse the government of turning a blind eye to persecution of the Muslim minority.

Myanmar's exports to the EU reached 1.5 billion euro ($1.7 billion) in 2017, a ninefold increase over 2011, with sewn products such as clothing making up 80% of the total. Losing the trade preferences would be a huge blow to the economy. 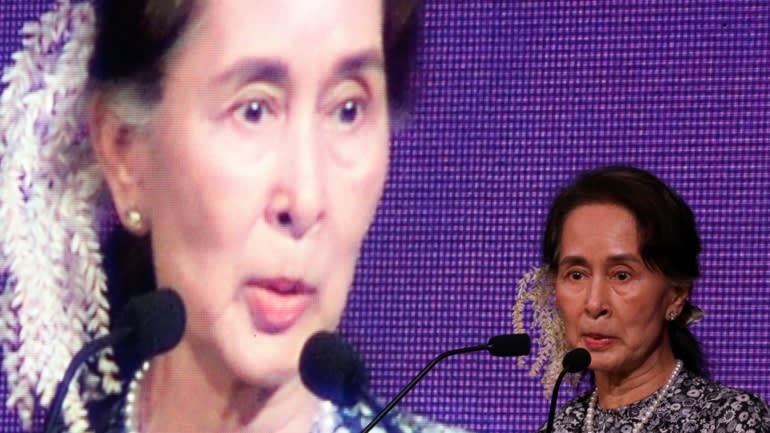 There is widespread pessimism among foreign businesses in Myanmar. Forty-six percent of European companies believe economic conditions are worsening, according to a survey conducted in September and October by the European Chamber of Commerce in Myanmar. The figure rose for the second straight year.

According to government statistics, $3.1 billion in foreign investments were approved in the year through October, down 60% from the same period in 2017.

The International Monetary Fund cut Myanmar's economic growth forecast to 6.4% from an earlier 7% for the year to September 2019, in a report released Dec. 13.

The slowdown is spurring economic reforms, which had stalled under State Counselor Aung San Suu Kyi's leadership. Faced with growing economic fallout from the Rohingya refugee crisis, the government has taken a flurry of measures.

In mid-November, it set up the Ministry for Investment and Foreign Economic Relations which is tasked with promoting foreign investment. U Thaung Tun, a close aide to Suu Kyi and chairman of the Myanmar Investment Commission, which screens big investments by private companies, was appointed to head the new ministry.

It combines two spinoffs from the Ministry of Planning and Finance: the Directorate of Investment and Company Administration, which handled the registration of private businesses, and the Foreign Economic Relations Department, which served as a contact point for international development organizations.

The Central Bank of Myanmar in November began allowing foreign banks already operating in the country to provide local companies with financial services, including loans and remittances. But because many Myanmar companies are seen as poor credit risks, the central bank's new policy is unlikely to produce quick results, said an official with a foreign bank in Myanmar.