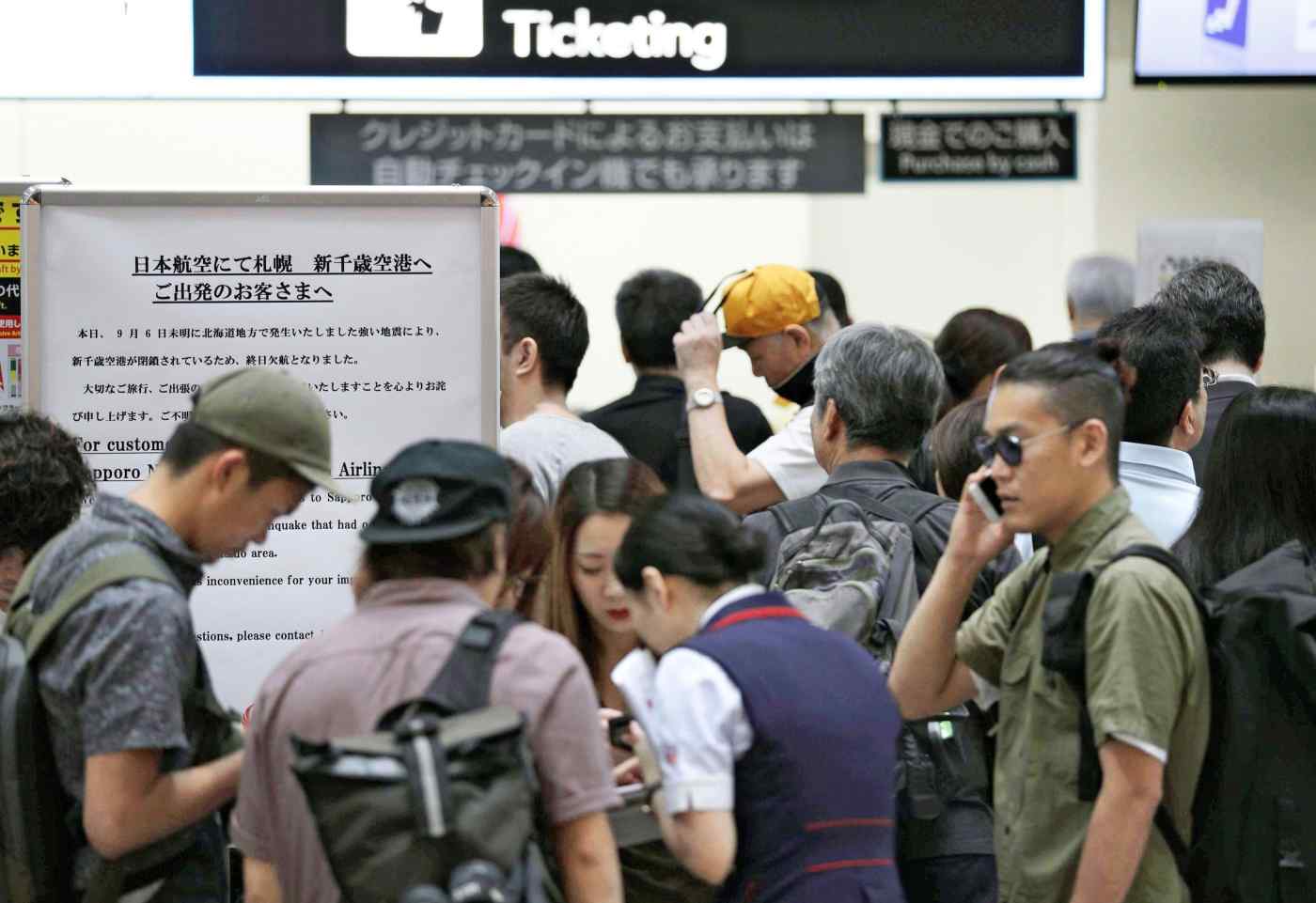 TOKYO -- The deadly earthquake that shook northern Japan early Thursday, just two days after a typhoon ravaged the west of the country, highlighted the risks that natural disasters pose for the country's economy.

As was the case in the Osaka region after Typhoon Jebi flooded Kansai International Airport, the country's main gateway for Asian tourists, Thursday's earthquake paralyzed broad swathes of Hokkaido's economy.

Authorities have so far identified nine dead and another 25 missing due to the 6.7-magnitude earthquake. At one point 2.95 million households on the island were without electricity, Hokkaido Electric Power said. The scale surpasses 1995's Kobe earthquake, which left roughly 2.6 million homes without power.

Thursday's quake triggered the first blackout ever to span the entire grid of one of Japan's regional electric utilities. Not even the 2011 tsunami caused such an instantaneous, widespread power outage.

The disasters follow flooding that killed several hundred people in Hiroshima, an earthquake in Osaka, and a summer of record-breaking temperatures.

The government has already used nearly half its 350 billion yen ($3.2 billion) of contingency funds on those calamities, and may now be forced to dig deeper into its pockets.

Satoshi Fujii, an adviser to Prime Minister Shinzo Abe, told Reuters that Japan should spend more money on disaster prevention. He says 10 trillion yen of fiscal stimulus is needed every year over the next five years to offset a decline in consumption expected after a planned sales tax hike in 2019.

Any calls for extra spending may, however, be met with resistance as the government is seeking to balance its books by restoring the primary balance to a surplus. Japan's debt is more than double the size of its gross domestic product. An emergency shutdown of the Tomato-Atsuma coal-fired power plant in Hokkaido following Thursday's earthquake led to blackouts across the island.   © Kyodo

One major vulnerability exposed by the earthquake was Hokkaido's heavy dependence on a single power plant. The coal-fired Tomato-Atsuma plant, which is located near the earthquake's epicenter and meets about half of Hokkaido's power needs, automatically stopped operating immediately after the earthquake.

This triggered an inbuilt safety feature that led to all other plants in Hokkaido shutting down to prevent the surge in demand from damaging the grid.

Hokkaido Electric grew dependent on Tomato-Atsuma after the Tomari nuclear power plant was shut down in 2012 for periodic inspections following the Fukushima nuclear disaster the previous year. The plant has remained offline.

Hokkaido Electric said it would be able to restore power to around 70% of peak demand. But "a complete recovery will take about a week," said President Akihiko Mayumi.

The loss of power has paralyzed urban services, and transportation networks descended into chaos for an entire day. New Chitose Airport, the main gateway to Hokkaido, was shut down Thursday due to collapsed ceilings and flooding, but there were some domestic flights out of the airport on Friday. New Chitose accommodates about 23 million passengers a year, making it Japan's fifth-busiest airport.

Service on the Hokkaido shinkansen bullet train was suspended until Friday morning. Hokkaido is a popular tourist destination that welcomed 2.79 million visitors during the fiscal year ended in March, a 21% surge and the sixth straight annual record. One major draw is that the island has been relatively free of the earthquakes and other natural disasters that have afflicted other parts of Japan. Thursday's temblor could hurt that image.

The lack of power has brought a number of Hokkaido's production centers to a standstill. Nippon Steel & Sumitomo Metal had to halt the operation of blast furnaces and other key equipment at its Muroran Works on the island. In-house power generation is unable to provide enough backup electricity.

The auto industry was not immune to the quake's impact. Toyota Motor Hokkaido, the Toyota Motor unit that manufactures auto components, paused production at a plant in the city of Tomakomai, and a timeline for restart has yet to be set. Denso Hokkaido, the vehicle semiconductor arm of auto component maker Denso, closed its operations for the entire day Thursday.

Hokkaido is a big dairy-producing area of Japan, and the earthquake forced Megmilk Snow Brand, Meiji Holdings and Morinaga Milk Industry to halt production at all Hokkaido factories. The island is also home to 20% of the nation's fishing and fish-farming industries, but ice machines and refrigeration equipment at ports meant to preserve freshly caught fish were rendered unusable. 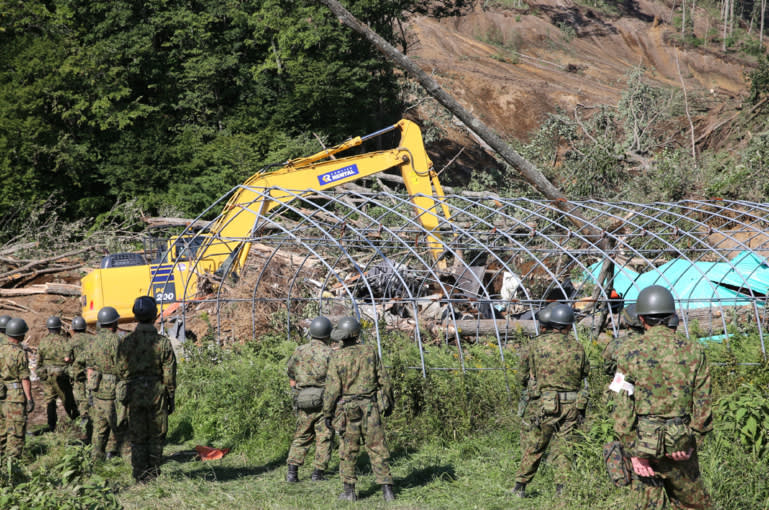 Members of the Self-Defense Forces search homes hit by landslides in Atsuma, Hokkaido, on Thursday. (Photo by Maho Obata)

The temblor incapacitated the local financial industry as well. The Sapporo Securities Exchange suspended trading for all 50 of its components for all of Thursday. The exchange resumed trading on Friday.

On the Tokyo Stock Exchange, investors sold off shares of companies exposed to fallout from the disaster, including those of insurance providers facing hefty payouts. Hokkaido Electric lost 7% at one point, while Nippon Steel and Morinaga Milk Industry also fell.

On Thursday, the Hokkaido prefectural government designated the quake-stricken area eligible for disaster relief. Food, water, batteries and other necessary items will be shipped to locations impacted by the massive blackouts. Small-to-midsize businesses will be able to gain access to financing from state-linked financial institutions that will cover the costs of recovery.

About 4,900 Japan Self-Defense Force personnel were on the ground Thursday to help with rescue missions and water supply, among other operations. Their ranks will grow to 24,000 on Friday, and to 25,000 on Sunday. Up to 33,000 SDF members were deployed following the July flooding in western Japan, and those assignments just wrapped up on Aug. 18.