Survey reveals pessimism over China, hope for AI and 'internet of things' TOKYO/SEOUL -- Chinese and South Korean business leaders are more concerned about U.S. President-elect Donald Trump than their peers in Japan, a survey showed, while all three countries shared a bleak view of the Chinese market in 2017 and high hopes for the future of artificial intelligence and the "internet of things."

Some 42% of respondents in China and 52.9% in South Korea said they expected the incoming Trump administration to negatively affect their businesses, compared with 10.8% in Japan.

Trump has called for a 45% tariff on Chinese products and has suggested renegotiating the free trade agreement with South Korea. Business leaders in these countries worry that such policies could squeeze their exports to the U.S.

In a separate Nikkei poll of just Japanese business leaders in November, 37% had expected some negative impact from the Trump presidency. But the weak yen and strong stock prices since the U.S. election that month seem to have warmed them up.

When asked what specifically Trump could do that would hurt business, roughly half of respondents in all three countries cited raising tariffs and enacting other protectionist policies. Scrapping the North American Free Trade Agreement, which would change how products made at Mexican plants are sold to the U.S., ranked among the top three concerns in both Japan and South Korea.

In regards to potential benefits, the most popular answer in China, at 34%, was the U.S. leaving the Trans-Pacific Partnership pact, reflecting alarm over the proposed trade bloc that excludes China.

About 60% in China and South Korea expected relations between Washington and Beijing to sour under Trump. Over 40% in China thought Beijing would wield greater trade influence in Asia and more than 40% said the same in regards to the military, though few in Japan and South Korea agreed.

Asked to name up to three places where they expected to face greater headwinds in 2017, executives in all three countries most frequently said China -- 19% in Japan, and an even worse 41% in China and 69.2% in South Korea. Higher costs, including for labor, and a widespread supply glut across industry lines loom heavy over companies operating there.

Many believe the Chinese economy will continue to slow, and have adjusted their forecasts accordingly. Sixty-two percent in Japan, 46% in China and 62.5% in South Korea cited the Chinese slowdown when identifying up to three threats to the global economy and their own companies. This was the second-most-common response in all three countries, following interest rate hikes in the U.S.

Growing costs and the supply glut were both cited as the main culprits behind China's slack by 55% of respondents in Japan. South Koreans thought these were the second- and third-largest factors, at 40.4% and 27.9%, respectively.

South Korean corporations also face risks from cooling bilateral ties with China. Beijing is strongly opposed to Seoul's decision to deploy the Terminal High Altitude Area Defense missile defense system. Chinese authorities conducted fire safety and sanitation inspections at Lotte Group's local operations in December, and even launched an extensive tax probe. Many South Koreans see this as retaliation against the company for providing the site for the THAAD deployment.

Skepticism over Trump has also fed concerns about the North American market. Some 36% of Chinese respondents said it will be more difficult to do business there this year, making it the second-most-common response after China. It ranked third in South Korea at 29.8%.

Trump hopes to boost employment by reviving the manufacturing sector. Though he has dissuaded several companies from moving factories abroad, few think he will bring the bulk of production back to the U.S.

"The only things that can be made in the U.S. are high-value-added products, such as cars and airplanes," said University of Tokyo professor Junjiro Shintaku. "Facilities in emerging economies are building up their capabilities."

There seems to be little concern over Southeast Asia. Japanese business leaders alone were asked which markets they had high hopes for, and the region came in first at 63%. While no respondents in Japan expected trouble in India and other South Asian markets, 12% in China did.

Looking to the future

Artificial intelligence and the internet of things was consistently ranked among the two-most-promising fields for the next decade, with IoT coming in first in Japan and AI taking the top spot in the other two countries. Many are looking to bolster their earnings and cultivate new business opportunities in these fields. 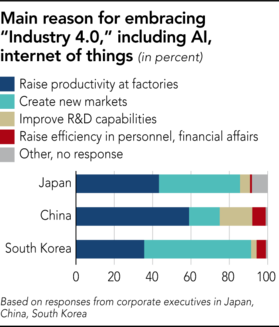 When asked what they hoped to achieve by adopting these technologies, better productivity in manufacturing topped the list in China at 59%, followed by improvements in research and development at 17%. Even the "factory of the world" needs a technological boost in order to deal with rising wages and to boost competitiveness.

Partnering with other businesses was the most common way companies in all three countries envisioned advancing their capability in AI and IoT. But most mainly wanted to join hands with compatriots, with only about 14% in China or South Korea considering working with a Japanese peer.

Other possible picks for promising fields included robotics, self-driving cars, drones and biohealth. In Japan, self-driving cars came in third at 5.1%. Biohealth came in high in the other two countries at about 21%, even tying for second place with IoT in South Korea.

Samsung Group unit Samsung Biologics stole headlines for its November initial public offering, which led to a market value of 10.69 trillion won ($9.01 billion at current rates) for the company on the following day. Chinese business owners are also seeking opportunities in the medical sector as the population there ages.