TOKYO/KUMAMOTO   Engineers in blue, pink and gray uniforms cautiously made their way into the crippled Aisin Seiki factory. The plant, usually thrumming with the sound of door, engine and other parts being made for Toyota Motor, was eerily silent, knocked out by the magnitude 6.5 earthquake that slammed the southwestern Japanese prefecture of Kumamoto five days earlier, on April 14. The nearly 200 Aisin and Toyota engineers would have come sooner, but relentless aftershocks and another huge quake -- a terrifying 7.3 that hit like a sucker punch on April 16 -- had paralyzed much of the region's transportation networks.

"It's totally unclear when production will resume," an Aisin spokesman said. "The power is back, but we still don't know whether the facility is fully functional." Electricians from the power company were called in to reconnect the lines. 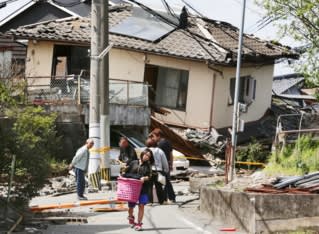 A girl carries a basket of clothes in the quake-hit town of Mashiki. (Photo by Kosaku Mimura)

Just eyeballing the plant from the outside, it was hard to gauge the extent of the damage. A look inside, however, revealed a partially collapsed ceiling, upended machines and destroyed production lines. Electric cables were ripped from their sockets and half-finished components lay scattered across the floor.

"The inside is a complete mess," said one engineer after emerging from the factory, shaking his head.

The effects of the production casualty have already rippled through Toyota's supply chain, with the automaker suspending production of Lexus luxury cars at its plant some 130km to the north, in Fukuoka Prefecture.

A protracted shortage of key components from Aisin is certain to squeeze production at the Fukuoka plant, which cranked out 350,000 cars last year. And it is not just Fukuoka that is being crimped; Toyota's nationwide output has already shrunk by an estimated 50,000 vehicles so far. 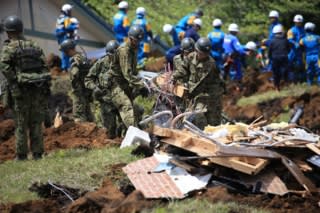 Self-Defense Force troops, some of the 20,000 mobilized, help with relief efforts. (Photo by Akira Kodaka)

CRUMBLING GATES   The earthquakes come at a time when local governments across Kyushu -- Japan's southernmost main island and home to five other prefectures besides Kumamoto and Fukuoka -- are stepping up efforts to take advantage of the island's proximity to China and other Asian nations that have seen remarkable economic growth in recent years. Promoting themselves as Japan's "gateway to Asia," governments there have been inviting automotive, electronics and other companies to establish factories from which they can export their goods to eager Asian markets.

The appeals extend to tourism, as well. Kyushu is a popular destination for Chinese and South Korean visitors, many of whom travel there by ferry to visit such places as the Beppu hot springs in Oita Prefecture, the Huis Ten Bosch amusement park and Kumamoto Castle, which was ravaged by the quakes.

According to the Kyushu District Transport Bureau, 2.83 million foreign tourists visited Kyushu in 2015, up 69% on the year and the fourth straight year of increase. Of the total, nearly 70% were from Asia.

But after the temblors, China's Foreign Ministry banned its citizens from traveling to Kumamoto and even advised against visiting the broader Kyushu area. Meanwhile, major South Korean travel agency Hanatour Service has suspended tours to Kyushu, according to local media, and many other Asian travel companies have done the same.

The Tokyo offices of the Japan National Tourism Organization have been receiving calls from foreign tourists inquiring about the latest developments and asking for help. "Tourists who don't speak Japanese have been asking us to help them let inns in Kumamoto know that they unfortunately have to cancel their stays," said Yoshihide Taniguchi of the inbound tourism strategy department. Citigroup estimates that spending by overseas visitors for the April-June period may plunge by nearly 70% in Kyushu and 7.4% nationwide from a year earlier. Travelers have reason to be skittish: Japan's Meteorological Agency has detected nearly 500 tremors since April 14 and warns that bigger ones may be on the way. It called the seismic activity "unprecedented" in the way it came as a chain of large quakes whose epicenters migrated eastward from Kumamoto to neighboring Oita Prefecture, leaving devastation in their considerable wake. "I'm worried my daughter may catch a cold or become sick," said homemaker Misuzu Tahara, pointing to her 4-year-old in a municipal building in Mashiki, near central Kumamoto. Now serving as a temporary evacuation center, the facility is crammed with some 600 evacuees. Space is so tight there that people are sleeping in the hallways and even in areas outside the building. "I need to keep her clean and sanitary, but we are short of soap and detergent," Tahara said.

For relief efforts, Japan's Self-Defense Forces mobilized 20,000 troops to help in affected areas, and the U.S. military flew in supplies using two Osprey aircraft. It was the first time the tilt-rotor planes had been used for disaster relief.

The impact on the island's roadways and railways has been significant. A bullet train was jolted off the rails near Kumamoto Station, halting trains along the Kyushu Shinkansen network, which connects major cities across the island. Multiple local rail systems and major highways were closed due to structural damage or landslides.

HIT WHEN IT'S DOWN   In economic terms, Kyushu is not a major player in Japan. It accounts for less than 10% of the country's gross domestic product, while the hardest-hit prefectures of Kumamoto and Oita each accounts for a modest 1%. In Fukuoka, Kyushu's economic engine, day-to-day life for most people has not been affected, and in Tokyo the impact is even smaller.

But the numbers don't tell the whole story. Even a minor drag on the economy is significant when growth isn't happening. Ryutaro Kono, chief economist at BNP Paribas Securities (Japan), said that as production and spending slow due to the quake, real annualized GDP growth for the April-June period "will likely fall below zero." He predicts that the revised figure for the January-March quarter will fall below zero, as well, putting the number in negative territory for three consecutive quarters.

Adding to the economic strain is the increasingly muscular yen. The Japanese currency strengthened beyond 108 yen to the dollar after the quakes, causing share prices to tumble on worries that exporters will be hurt. The yen also appreciated after the major quakes that hit Kobe in 1995 and the Tohoku region in 2011, on speculation that companies and insurers would sell overseas assets and funnel the money back home to cover reconstruction costs or insurance payouts. Although it is difficult to know whether that in fact happens, it's a recurring theme after quakes, and it always takes a toll on sentiment. Economists are saying that as the outlook darkens, the government will have no choice but to resort to fiscal stimulus measures. Prime Minister Shinzo Abe supported that view during an April 18 Diet session when asked whether the government will prepare a supplementary budget to cope with the Kyushu disaster. "I will take any necessary measures," he replied.

BNP's Kono says there is now an over 50% chance that the planned sales tax increase -- which Abe already pushed back to April 2017 from the initially planned October 2015 -- will once again be postponed.  The government and ruling parties will likely give up on ratifying the Trans-Pacific Partnership trade pact in the current parliamentary session. It appears that aftershocks are already starting to be felt in important economic policy.