Economic picture brightens for ASEAN and India toward 2018 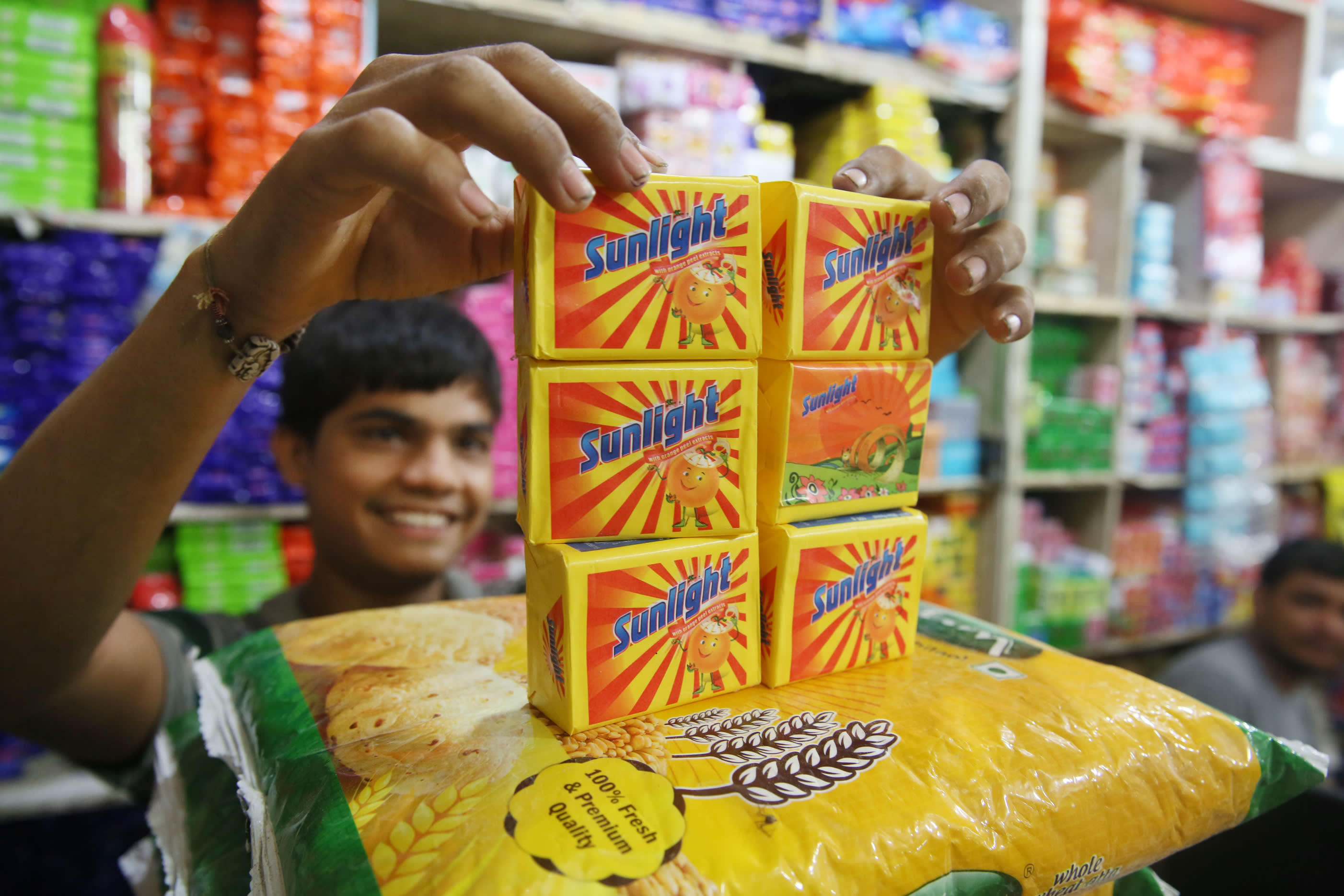 The economic effects India's new goods and services tax are expected to dissipate next year. Overall, growth is forecast to rise in both India and the large economies of Southeast Asia next year. (Photo by Keiichiro Asahara)
KIYOSHI KUSAKA, Principal economist, Japan Center for Economic ResearchDecember 26, 2017 09:58 JST | Thailand
CopyCopied

In the most recent quarterly survey of major economies in Asia by The Japan Center for Economic Research and the Nikkei, economists were mostly upbeat, with growth forecasts rising toward 2018. India's expansion is expected to pick up as it shakes off the effects of the new goods and services tax. Southeast Asia, too, should see faster growth, helped by a combination of strong exports and solid domestic demand.

Compared with the previous survey in September, economists have raised their 2017 and 2018 growth forecasts for large Southeast Asian economies, reflecting the prolonged strength of electronics exports and spillover effects on domestic economies.

JCER and the Nikkei conducted their quarterly consensus survey from Nov. 29 to Dec. 15, compiling responses to 43 questions from economists and analysts in the five largest members of the Association of South East Asian Nations -- Indonesia, Malaysia, the Philippines, Singapore, and Thailand, plus India.

The growth of India's gross domestic product is forecast to fall below 7% this fiscal year because of the heavier-than-expected impact of the goods and service tax introduced in July. But the economy is recovering from the slowdown and growth is expected to return to over 7% in the next fiscal year, starting in April 2018. Asked what has most drawn their attention for the coming year, respondents cited general and local elections in Malaysia, Thailand, Indonesia and India. The weighted average growth forecast for the ASEAN5 in 2017 was revised upward 0.2 point to 5.0% from the September survey, as estimates for Malaysia, the Philippines, Singapore and Thailand were raised. This is the fourth straight survey since March that growth forecasts have been raised.

"Buoyant global demand will continue to support the export-led expansion," said Manu Bhaskaran of Centennial Asia regarding Singapore's economy. "The Thai economy is projected to grow at a faster pace, amid robust exports and tourism," said Amonthep Chawla of CIMB Thai Bank. With respect to Malaysia, Nomura Singapore's Euben Paracuelles said: "Growth has strengthened throughout 2017, with both domestic and external engines firing, setting up a solid springboard into 2018." 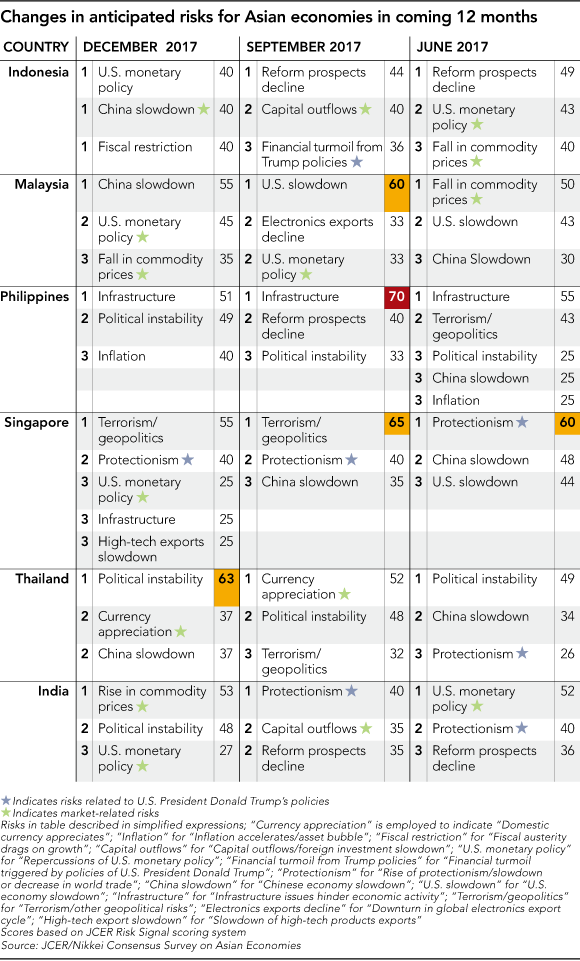 Strong domestic factors are likely to spur continued growth for Indonesia and the Philippines. Growth in Indonesia is forecast at 5.1% in 2017, rising to 5.4% next year. The Philippines is predicted to see growth of 6.7% in 2017 and maintain that pace in 2018.

"Domestic demand [is] regaining strength as government infrastructure spending is accelerating," said Victor Abola of the University of Asia and the Pacific in the Philippines. Maybank Indonesia's Juniman believes Indonesia's expansion is continuing due to "strong growth in household spending, government spending, trade and investment."

India's situation is somewhat different. The economic drag caused by the introduction of the GST was greater than expected. Growth in the April-June quarter fell to 5.7%, its lowest in more than three years. The economy, however, looks to be bottoming out, with July-September growth recovering to 6.3%.

Economists estimate that Indian growth will return to the 7% range; their quarterly forecast for October-December is 7.4%. Said Nomura India's Sonal Varma: "After the two major disruptions of demonetization and the GST, we believe the Indian economy is now on the cusp of cyclical recovery, and that these reforms will be positive for economic growth in the long term." 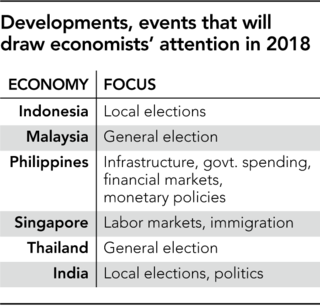 With regard to the markets, economists in the ASEAN5 countries expect interest rates to rise as 2019 approaches, in parallel with expected U.S. rate hikes. "Interest rate rises are expected to occur in line with Fed normalization," said Randolph Tan of Singapore University of Social Sciences. Their predictions for exchange rates, however, vary. Inflation is expected to further accelerate in 2018 in the Philippines, Singapore and Thailand, following sharp rises in 2017, reflecting a possible rise in oil prices and economic expansion.

Risks identified by economists are also more wide ranging than previously. The biggest risks cited differed by country. Political instability is one risk seen in several countries. It was the largest risk in Thailand and the second largest in India and the Philippines. U.S. monetary policy was considered among the top three risks in Indonesia, Malaysia, Singapore, and India. "Terrorism/geopolitical risks" were the biggest risk in Singapore. Rising inflation was seen as the third-biggest risk in the Philippines, up from the fourth in the previous survey.

Perceptions of risk arising from protectionism and other policies associated with U.S. President Donald Trump, which grabbed the attention of analysts in the December 2016 and March 2017 surveys, have receded. The elections may have far-reaching implications. "While the 14th Malaysian general election might generally boost public spending and domestic demand, the uncertainties will add volatility to the financial [market] and economy as a whole," said Wan Suhaimie of Kenanga Investment Bank in Malaysia. "There may be some political uncertainty from the upcoming election," said Naris Sathapholdeja of TMB Bank in Thailand. "We also expect the 2018 local government elections and preparation for the 2019 presidential election to help boost spending," said Wisnu Wardana of Bank Danamon Indonesia.

Details of the survey can be found on the JCER website.